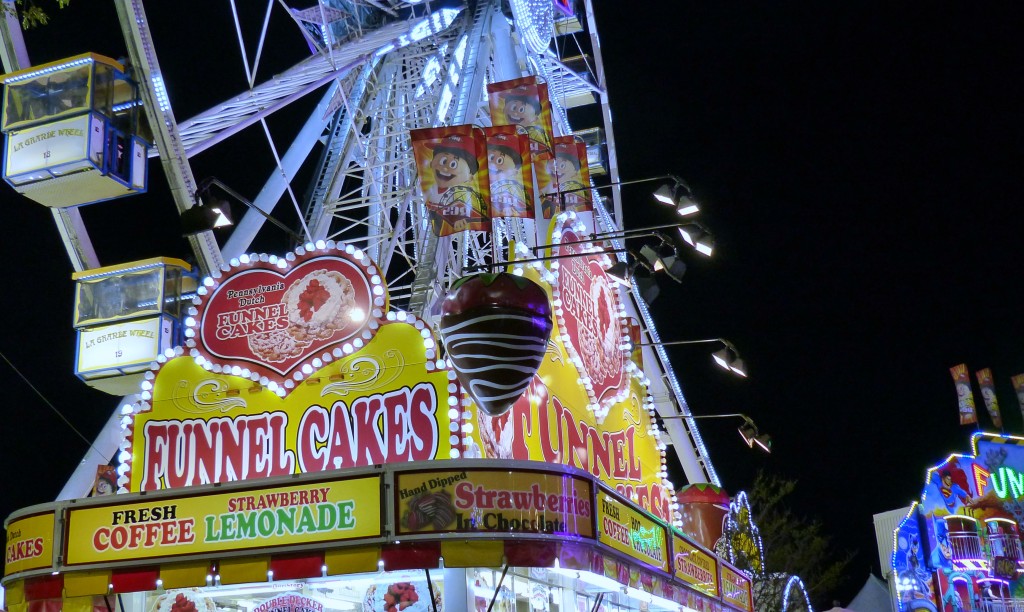 Here, the nomadic etchings of our favorite childhood memories–all electric blue and shocking pink, with stylized sculptures in every saturated color of the Sno-Cone rainbow. Exposed to temperature extremes and the rigors of constant travel, they probably travel with a touch-up crew.  How else, to maintain this full-spectrum, high-gloss beauty?

My companions roll down the fairway like Templeton, seduced by the smorgasbord of possibilities. 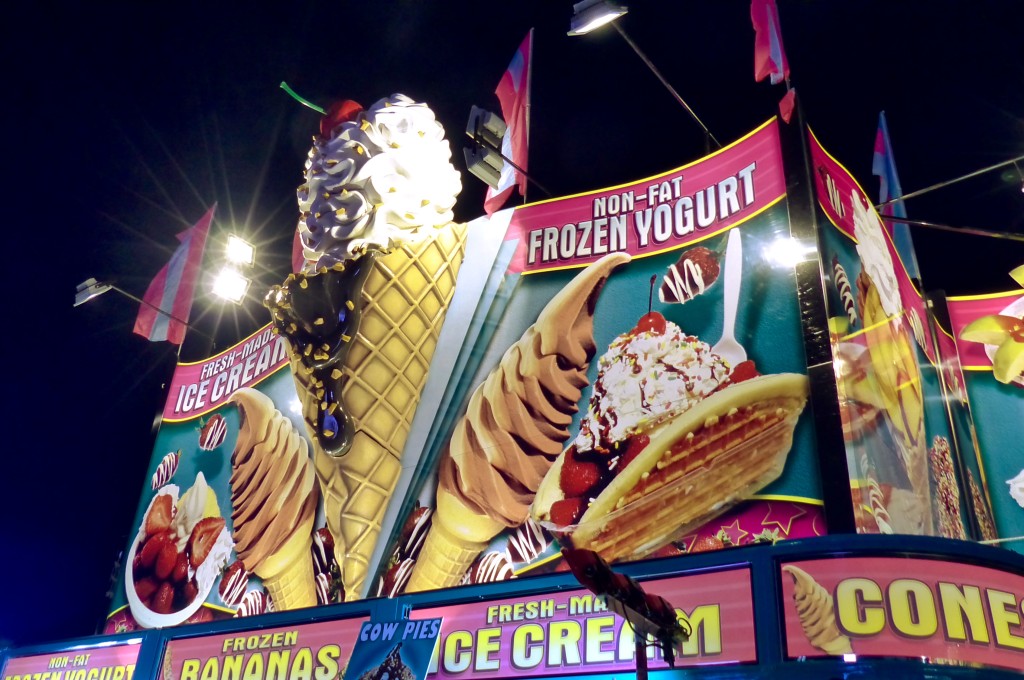 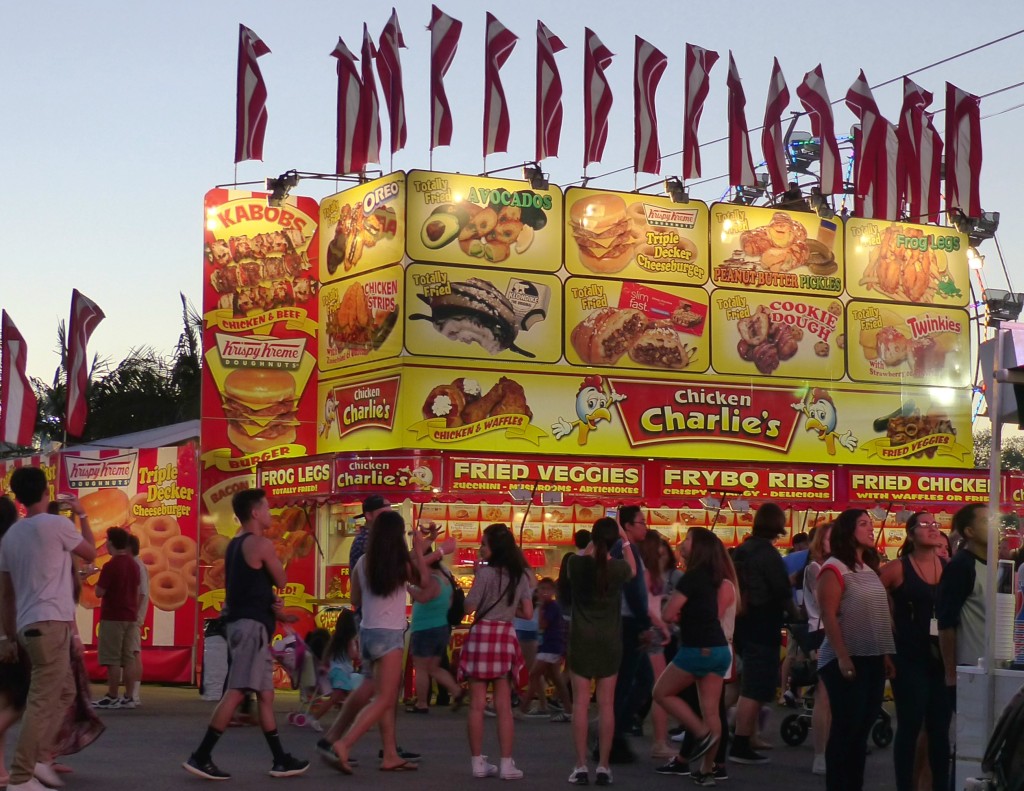 I find a slightly healthier option, tucked into the shadowy reaches of the fairway. Cashiers call out order numbers in monotone voices, as customers stare, in glassy-eyed confusion, at the menu boards. 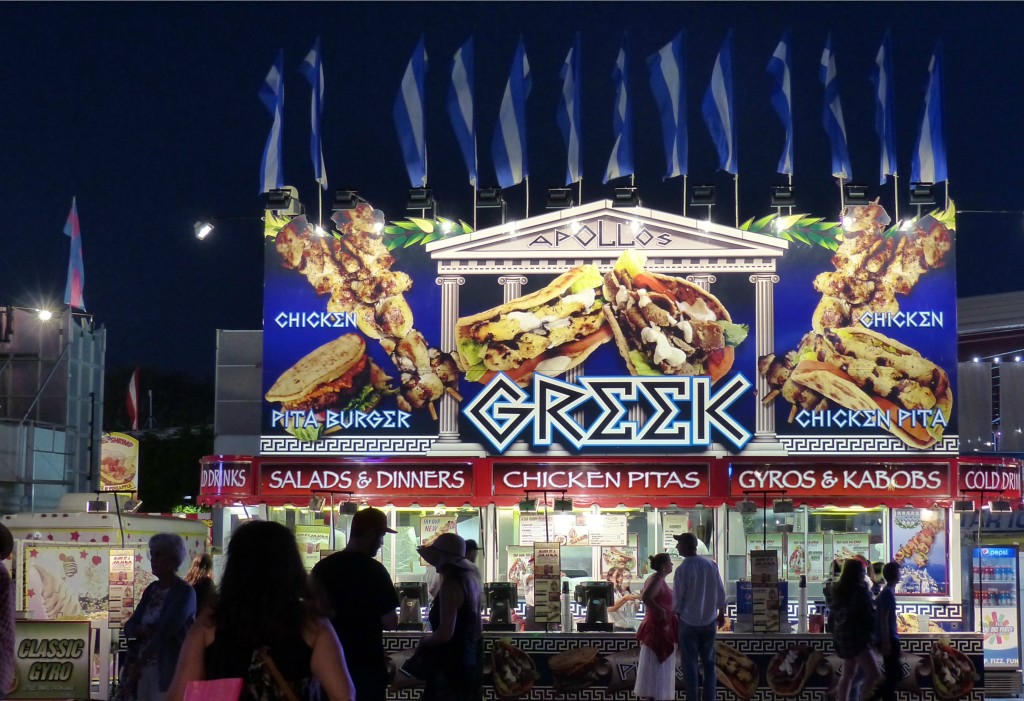 It’s a familiar choreography, accompanied as always by a cacophonous blend of rock, country and heavy metal music. Barkers, too, that pull us into their auditory orbit. “Try your luck!” they say, as truck-mounted speakers pulse.

Pass on the whirly-twirly rides; browse the barnyard exhibits before cheering on the racing pigs. I grab my partners’ hands, and we gawk at one last menu board.  Caramel apple, it is! 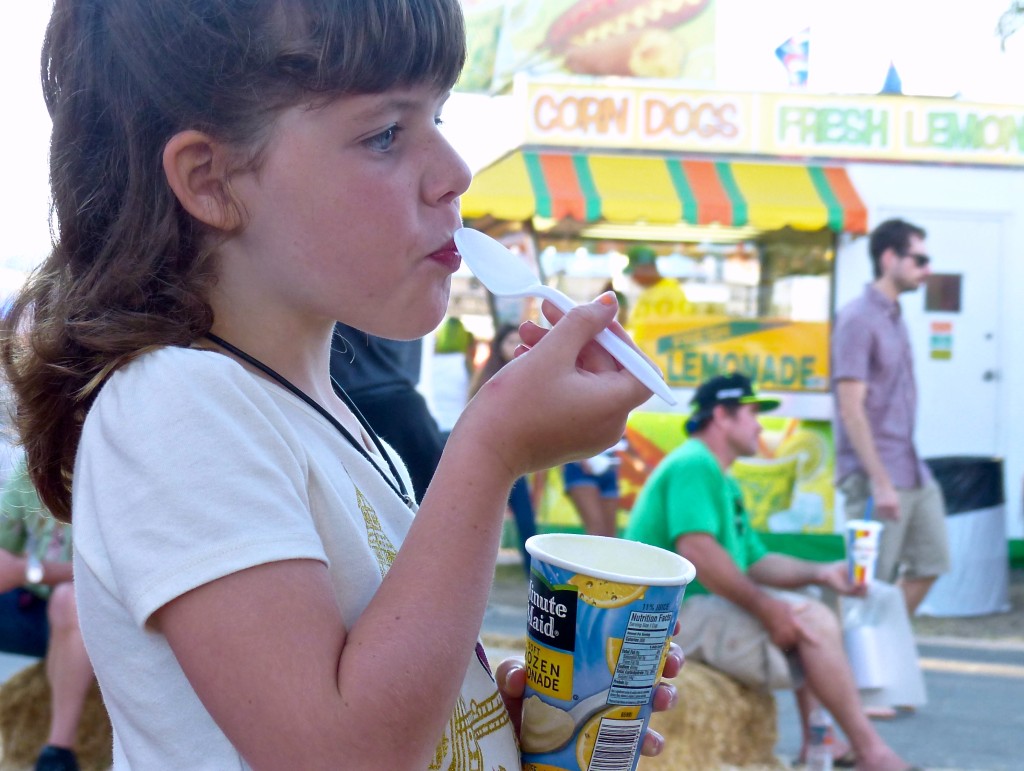 We savor each moment, revel in the sensory overload. Same as it ever was, just as we remembered.  Same as she’ll remember, someday.

#AugustBreak2015 Photography Challenge, continued. The word for Day 14 is art. I didn’t have a tripod handy, and I don’t yet know how to take nighttime shots. Still and all, I think these snaps reflect the essence of today’s prompt.

True to our tradition, we made our annual trek last night to the Orange County Fair. The evening was balmy, cooled by gentle ocean breezes, and the air was thick with Eau de Fairground: charred burgers and cinnamon rolls, beer tents and barnyard animals. "Home Sweet Home" is the theme this year, and by now our routine is so familiar, it did feel like a homecoming of sorts.

When I passed this sign, my arteries siezed I couldn't help thinking about poor old Wilbur, that RADIANT but HUMBLE character in Charlotte's Web. SOME PIG, anyone?

I had barbequed chicken for dinner, roasted corn, and sugar-free Dip 'n' Dots–same as always. My husband, well…he pinged from one food booth to the next, ala Templeton. Bratwurst,  barbequed chicken, homemade chips, my leftovers. You name it, he ate it!

Truth be told, I'm there for the exhibits. People-watching, too. I spotted this woman in the Master Gardener's tent, and for some inexplicable reason, I felt a tugging at my heart. Kindred spirits? I don't know, but I'd love to catch a glimpse of that sketchbook, and listen to some of her stories….

Here, a sad story with a happy ending: Daisy, a resident sow, gave birth to 11 piglets two weeks ago. But her brood survived, thanks to the generous dairy farmers that supply them with milk. As the crowds oohed and aahed over the three little piggies (and a spare) slurping dinner, their siblings romped through the straw and/or napped under a warming lamp nearby.

Meanwhile, their two-legged counterparts clogged the fairway, waiting for their heart attacks food.

Imagine the yarns this wooly guy could spin, if only he could talk. Does he count people when he drifts off to sleep? I wonder…

A ferris wheel ride to the top of the world…Who among us doesn't treasure those memories?

This little guy settled in for a little shut-eye in the far corner of his pen, oblivious to the camera-wielding bystander at the fence.

A few hours later, we were equally ready to tuck in for the evening. As we exited the parking lot, a full moon lit up the night sky–a punctuation mark for yet another fun day at the fair.

Our house feels much emptier today, now that my sister and niece have gone back to Portland. I miss them already, so to extend their visit (at least in my own mind), I thought I’d post a few photos from our weekend adventures.

A koala, doing what koalas do best.

A gaggle of gossiping flamingos

Next on our list: a blissful respite at the spa, followed by a raucous evening at the Orange County Fair.

Seems as if fair food gets more outlandish every year, doesn’t it? But Templeton my husband was in Hog Heaven! I had BBQ’d chicken and roasted corn. Again. Which, by the way, was delicious. For dessert, I had sugar-free Dippin’ Dots. (My dinner menu seems a bit self-righteous boring, I confess, now that I’ve typed it up for public consumption.)

Peep show! The animal exhibits are my favorite part of the fair, followed closely by arts and craft displays. Congratulations to my friend Stace Dumoski, who had TWO photos accepted for exhibition this year!

My heart ached for this beautiful giant, who was forced to ferry passengers around the perimeter of a miniscule enclosure.

Of course, no SoCal visit is complete without at least one trip to the beach. So after wandering around a Farmer’s Market in Long Beach, we took a stroll along the boardwalk in Laguna.

A lifeguard station on a quiet stretch of sand. But bleh, don’t look too close: that lifeguard’s performing (what should be) a private search-and-rescue operation. :/

The marine layer moved onshore a little earlier than usual, and since our visitors hail from the Pacific Northwest, they were amused by our comments about "overcast" skies.

Toby’s crashed out on my husband’s keyboard this morning, completely exhausted by all the activity. But I’m ready and eager to go at it again, so hurry back, Mei-Ling and Arielle! xoxo

Mary Pearson’s latest novel, THE MILES BETWEEN, is on a cross-country road trip—a tour that will shuttle advance review copies (ARCs) from San Diego to New York City. If all goes as planned, the ARCs will arrive in NYC by the book’s September 1st publication date.

I love escorting people around this place I call home! So…given the opportunity to chauffeur Mary’s new book around Southern California, I grabbed my car keys and hit the road. 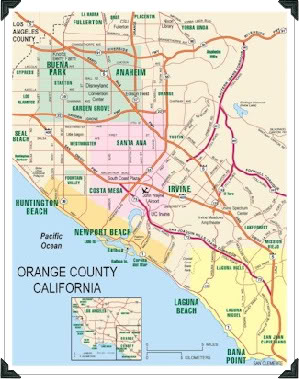 In this slideshow (link opens up in a new tab) The Miles Between travels  through a little slice of Orange County. What speaks more to the idea of summertime adventures, I ask you, than the local county fair? 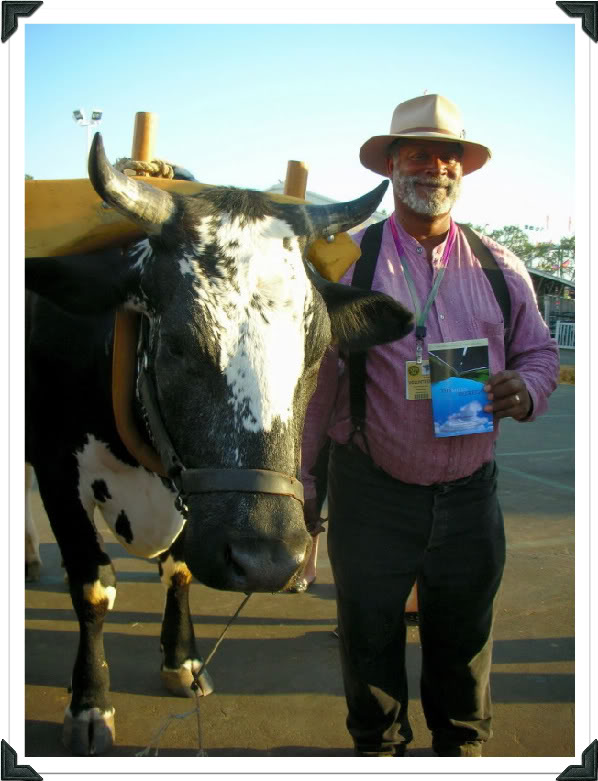 Want the ARC to visit your hometown? Honk Comment below by 6 a.m. PST on Monday, July 27th, and ask that your name be included in the drawing. (You can ride shotgun, of course, but please review the rules of the road before offering to take the wheel.)