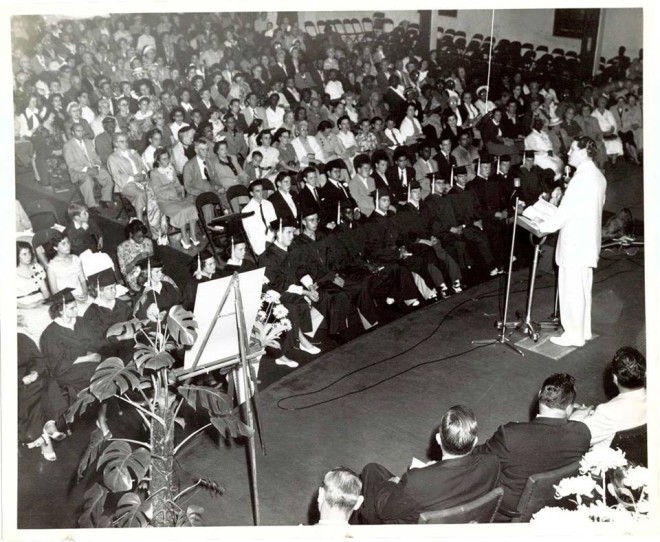 Here’s another picture of my mother, since this is her birthday week. She’s sitting in the front row, far left, at her high school graduation ceremony. World-renowned evangelist O.L. Jaggers is at the microphone. (World Church, circa 1955. Picture courtesy of Larry Abernathy, O.L. Jaggers’s son, who contributed it to our shared family archives.)

We dance round in a ring and suppose,
But the Secret sits in the middle and knows.
~Robert Frost

On Wednesday, I embarked on what could quite possibly be my last Nancy Drew caper–related to my current project, at least. I met with Larry Jaggers (aka Larry Abernathy), the son of evangelist O.L. Jaggers. Larry lives in the desert, and I live near the ocean, so we agreed to meet for lunch in the middle.

For almost seven hours, we swapped memories and mementos. Time flew by so quickly!  By the time we said our goodbyes (with promises to meet up again), a scarlet sunset was dissolving into dusk, and my Nancy Drew notebook was jam-packed with secrets.

It’ll probably take me a week or more to transcribe my notes and digital recording. I can’t tell you everything we talked about, not yet, but I’ll be happy to give you some clues:

Larry and I have in common that our fathers were faith-healing evangelists, swept up in the Latter Rain Movement with the likes of William Branham, A.A. Allen, Jack Coe, and Oral Roberts. So in that regard, we’ve shared experiences wholly unfamiliar to most.  We also have in common that our family trees are convoluted—and at one point, they actually connect! To wit: Larry’s older brother Ronnie (in actuality, his cousin) was married to my oldest sister, Coral.

Also of note: Larry, Ronnie, and my mother graduated from the World Church high school together. My mother’s in the front row, second chair to O.L. Jaggers’ left.

And though few people knew it at the time, my mother was harboring a secret of her own. It was cloaked by her graduation gown…