Tattered wings and faded beauty. No worries–it happens to everyone, eventually.

Swallowtail shows us how it’s done:  Bask in the warmth of the afternoon sun, drinking sweet nectar to your heart’s content and floating above it all. 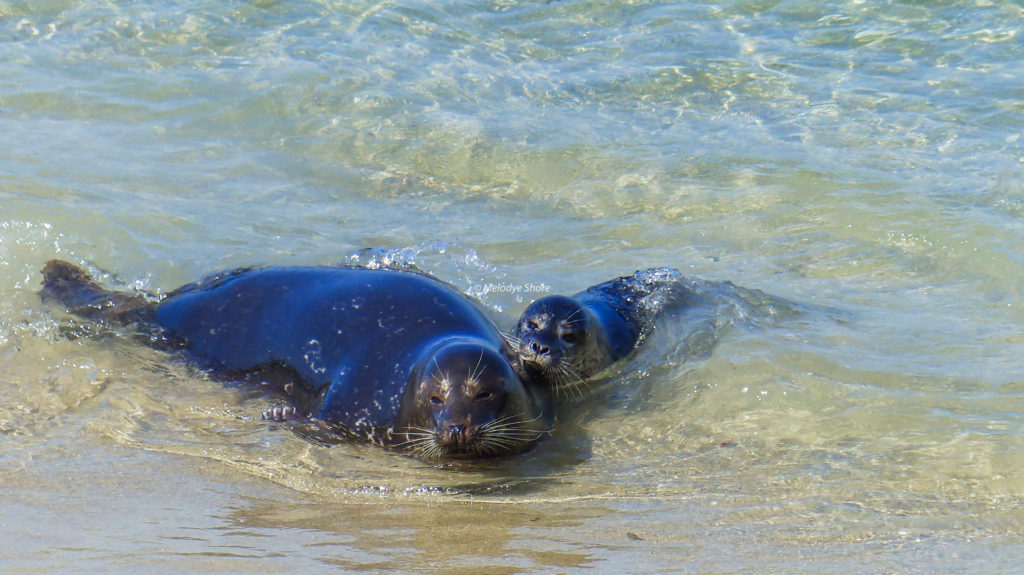 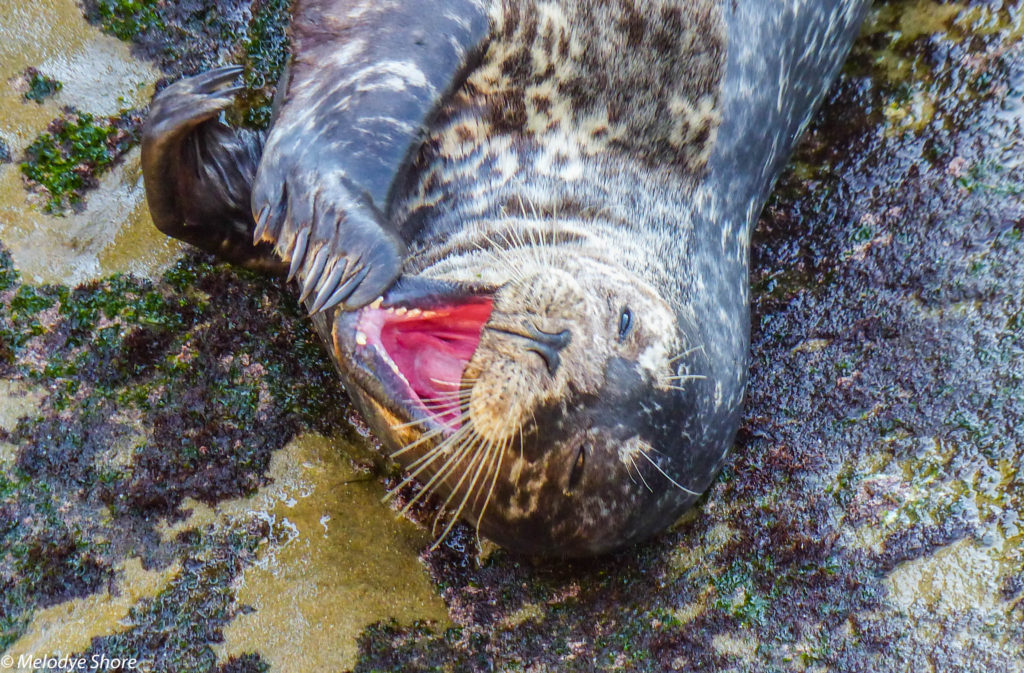 So much has changed since we last talked about Aryana’s hummingbird hatchlings on this blog. In brief: Within the span of 24 days, Wendy and Peter broke free of their eggshells, sprouted feathers and needle-sharp beaks, and took to the skies on iridescent wings.

I’ve already posted countless pictures on Facebook and Instagram, because…#bragbook. But from the online album my friend Carol Meadows so graciously curated, I’ve culled a few of my favorites. Pull up a chair, and I’ll tell you all about it…

When they first hatched, a Facebook friend suggested they looked like plump raisins with candycorn beaks. They were roughly an inch long, and were less than 1/3 the heft of a U.S. dime. But look how much they grew and developed, in just 2 weeks! 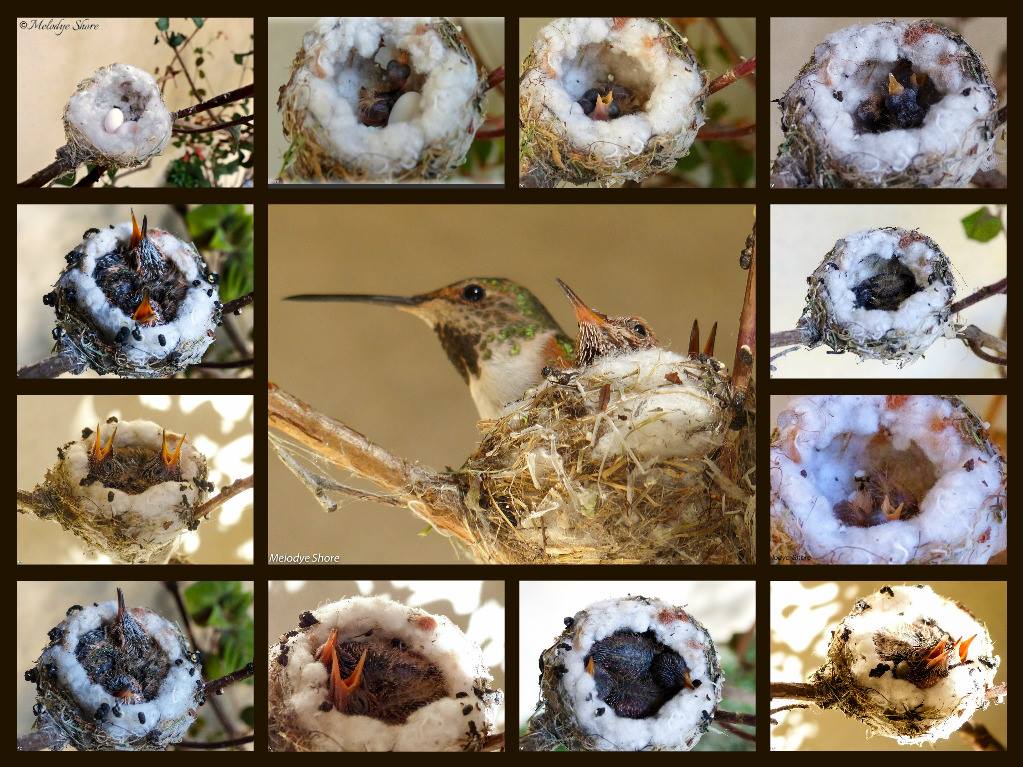 Even when their peepers hadn’t fully open, they sensed their mother’s approach. 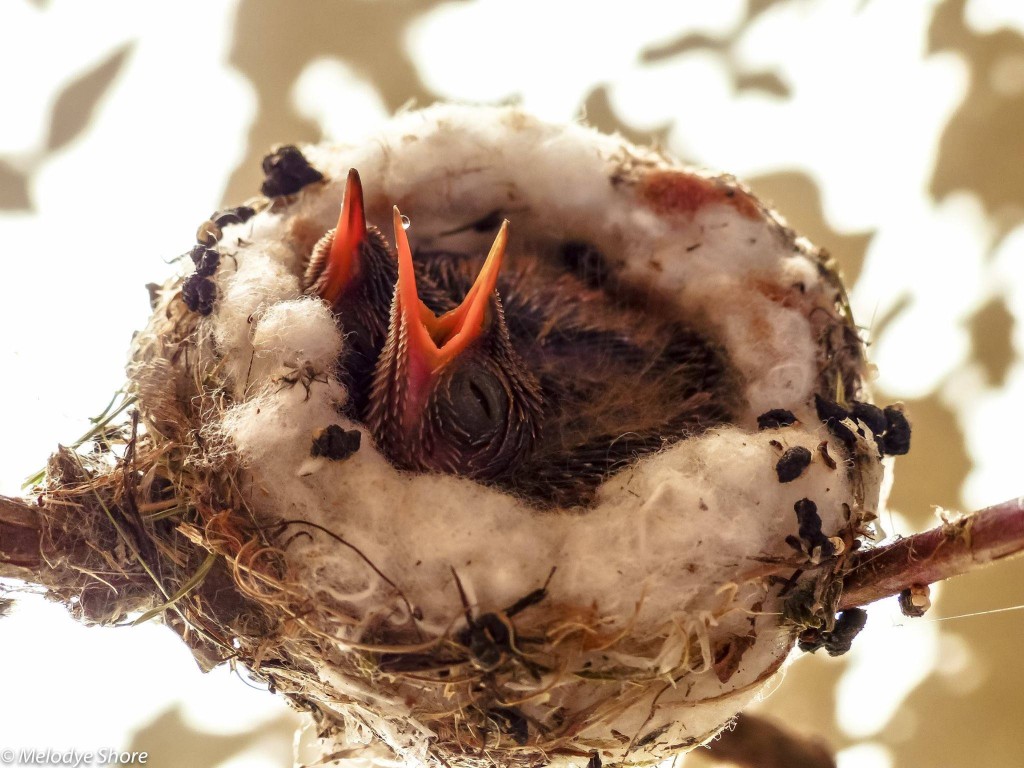 Aryana was a whirring blur of motion. No surprise, given that she had two mouths to feed, and a nest to defend against fluff-snatching rivals. I actually saw a female hummingbird snatch a wad of cotton from Aryana’s nest; but before she made her way clear of the fuchsia, Aryana was in hot pursuit, scolding and dive-bombing her like a fighter jet. 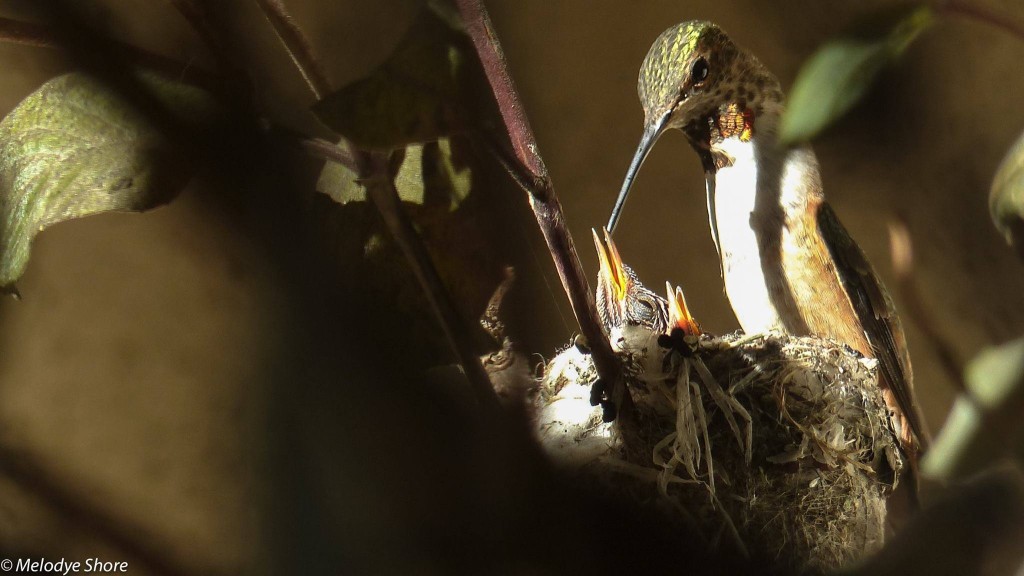 On very rare occasions, she cozied up to her brood in the nest. Even then, she was watchful. 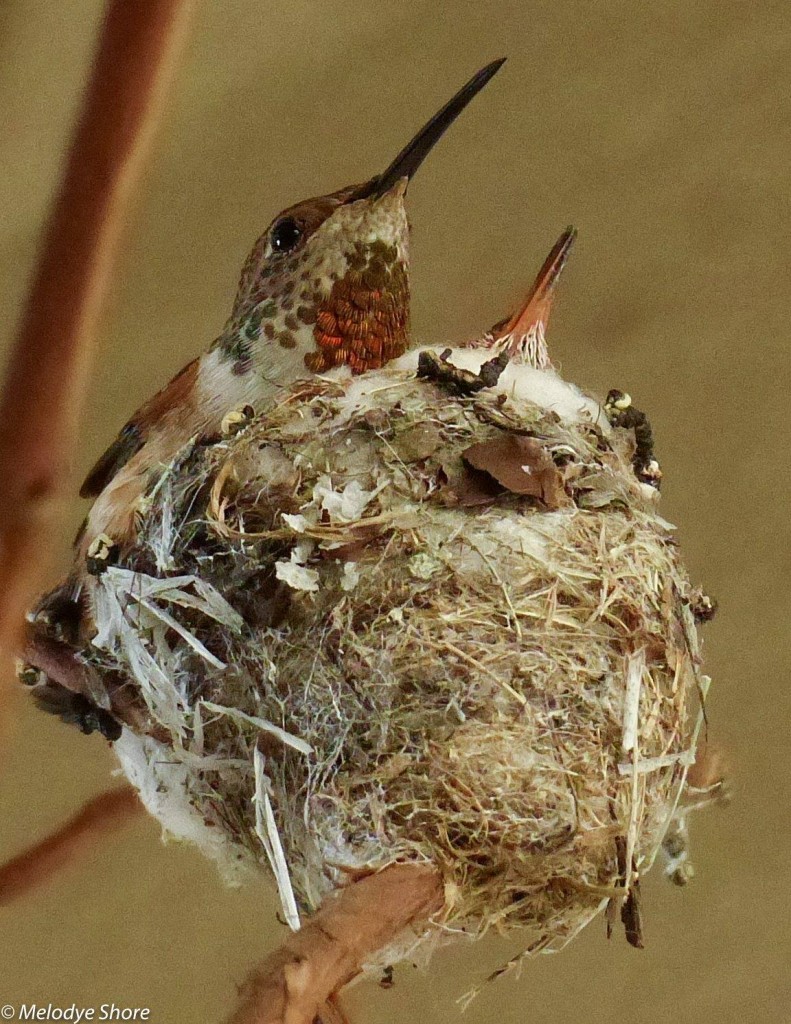 In that shaded alcove, Aryana’s babies were relatively safe. They were shielded from the elements and well-camouflaged. But when the afternoon sun brightened that dark corner, she used her body to shield them from eagle-eyed predators. 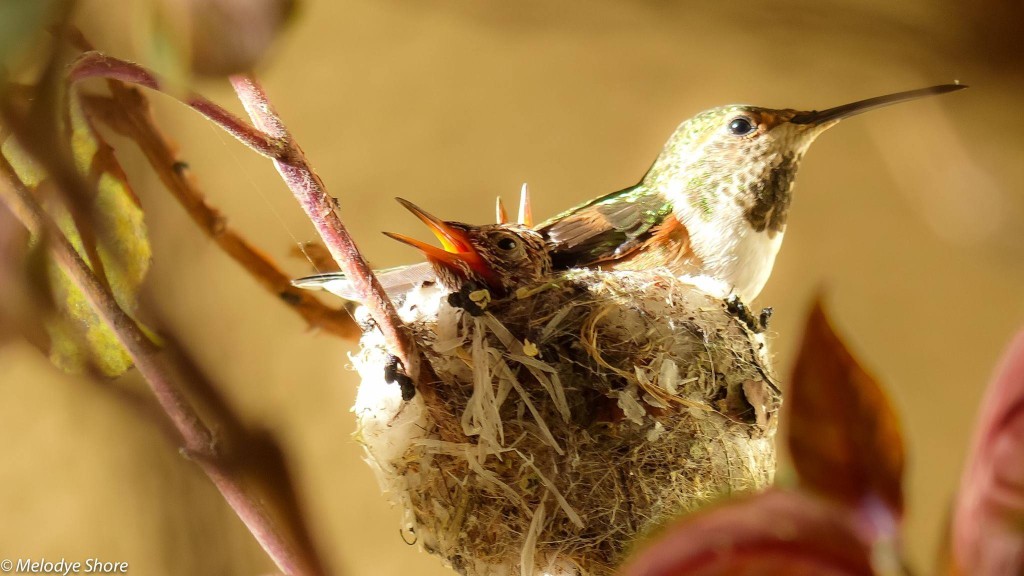 Wendy and Peter grew bigger by the hour, it seemed, and looked more like their mama every day. 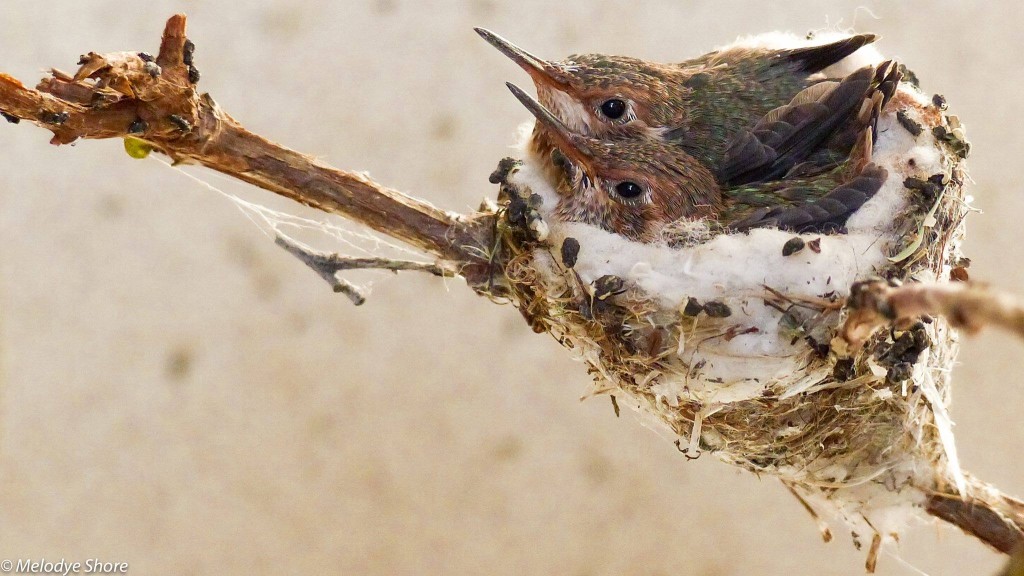 As their bodies expanded, their walnut-sized home seemed to shrink.  But the nest held fast, thanks to the magical properties of spider silk, one of the building materials Aryana instinctively knew to use. 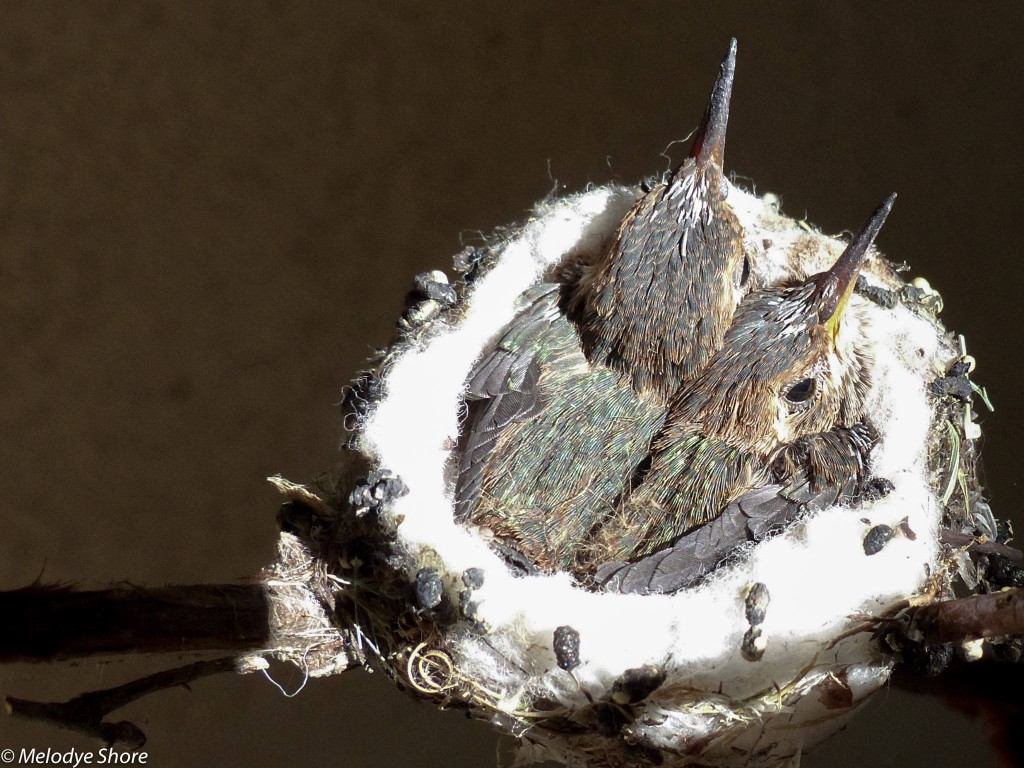 While their mama was away, the hatchling flapped their wings (wingercizing, some called it), and watched the skies for her return. 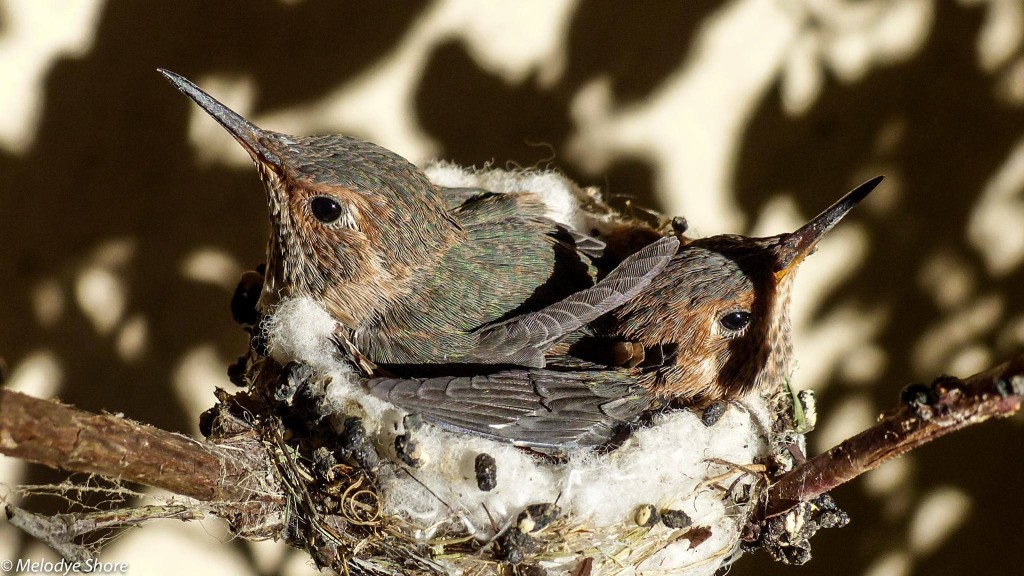 Aryana seemed unfazed by my presence, mainly because I was quiet and unobtrusive. Once they were moving around more, she even allowed me to record a short video.

In the blink of an eye, it seemed, Aryana’s babies were ready to make their way into the world. Wendy flew away first, leaving her younger brother more room in which to spread his wings. 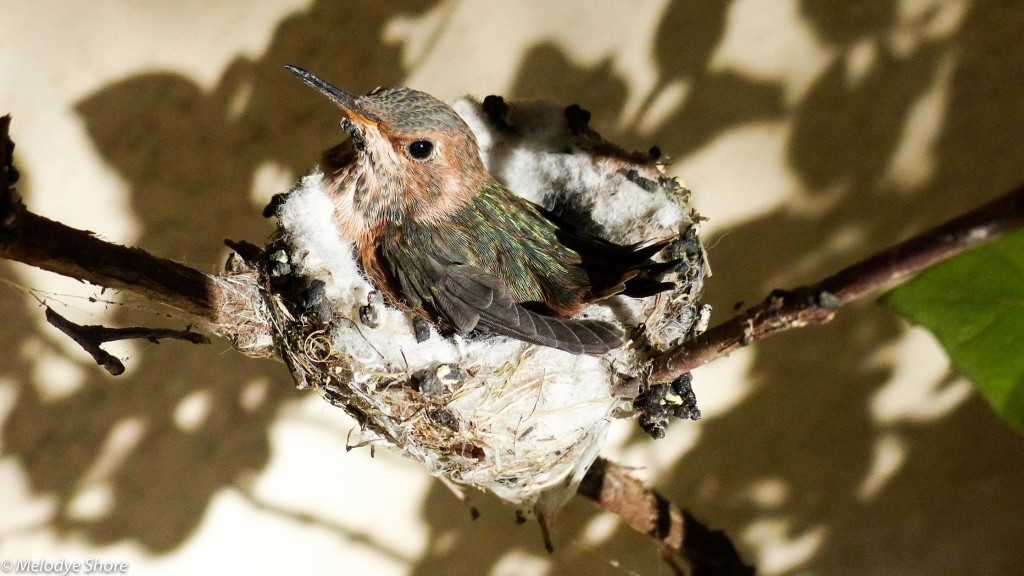 It wasn’t long before Peter got the urge to follow her. Here’s what that final push looked like. 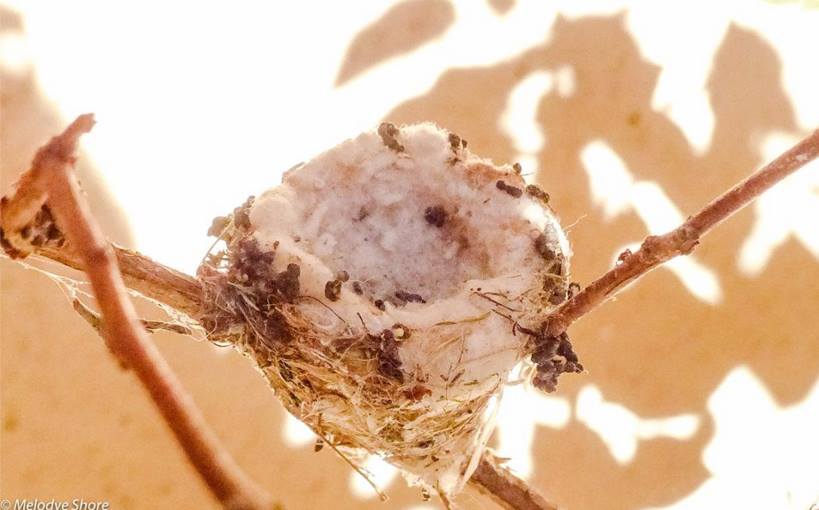 I saw both hatchlings take to the sky. Sheer magic, like few people ever get to see in their lifetimes! And just so you know how rare and wonderful this really is: researchers estimate that only 17-59% of a nest’s inhabitants actually make it from hatching to full feathering and fledging.

We’ve hosted several hummingbird families at Chez Shore now. Blessings though they may be, they sometimes revealed to us the darker, seemingly cruel aspects of nature. But on the whole, their stories had happily-ever-after endings, same as Wendy and Peter’s.

They’ve flown the coop, but they haven’t gone far. Aryana’s watching over them in our garden, showing them the best food sources (including but not limited to “her” window feeder), and teaching them how to find/defend their new territory. 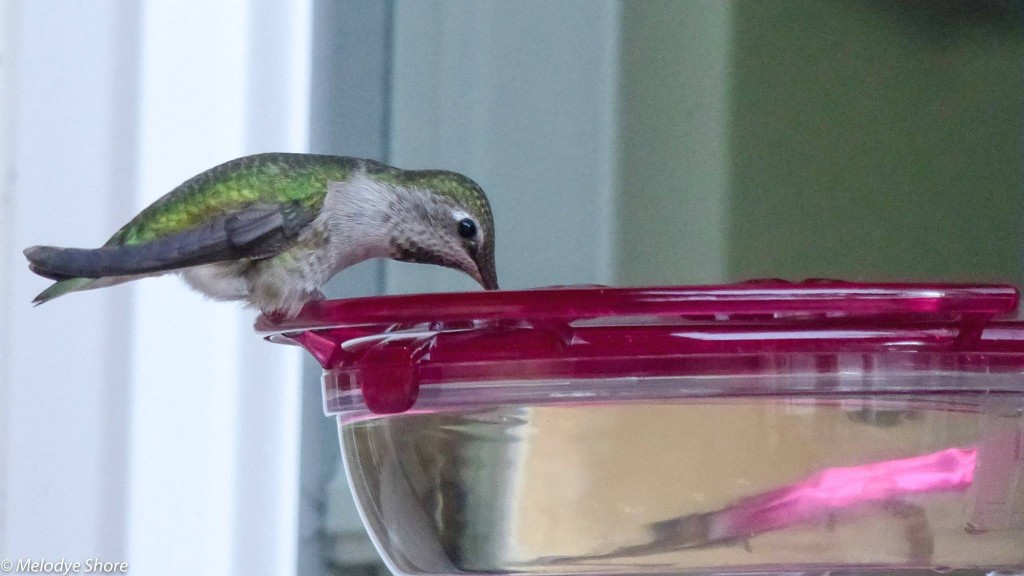 A couple of days ago, I was trimming the sweet potato vine in our side yard. A hummingbird whirred past my ear and landed on a nearby branch. It watched me work for a long while, tilting its head and cheeping. Most likely, it was Aryana or one of her fledglings. Heartwarming epilogue, am I right? But lemme also tell you about the task I’ve been avoiding. To wit: those teensy birds spattered a huge (yuuuuge!) mess o’ poop on the stucco walls that surrounded their tiny nest. The Crap They Leave Behind: let’s include that chapter title in a book for ‪Empty Nesters‬.

My heart was heavy when I positioned the stepladder beside the fuchsia plant in which Walela had built her nest.  Why had one of the hatchlings died, I fretted, and why hadn’t the mama hummingbird removed it from the nest?

Her nest was steeped in shadow, so I decided I’d wait to take pictures until later in the day. One last look, I told myself when I reached the front door. But when I glanced over my shoulder, I did a double-take.

I couldn’t believe my eyes. I’ll check again later, I told myself. Wait and observe, as my friend Amy suggested. My knees were shaking when I climbed the ladder again a while later. Here, ensconced in a walnut-sized nest, the very essence of hope. 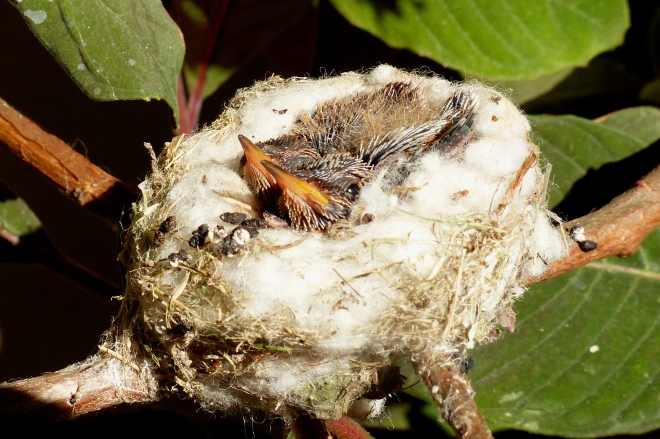 My hands trembled when I pressed the shutter. Could it be?