Judy Blume strides across the stage at Aratani Theatre, flashes of teal polish visible through her peep-toed pumps. Her voice is strained by a lingering cold, but at 78 years young, she’s nowhere near ready to slow down. Her hands flutter, and she talks a mile a minute. She’s ready with an answer, quick to laugh. 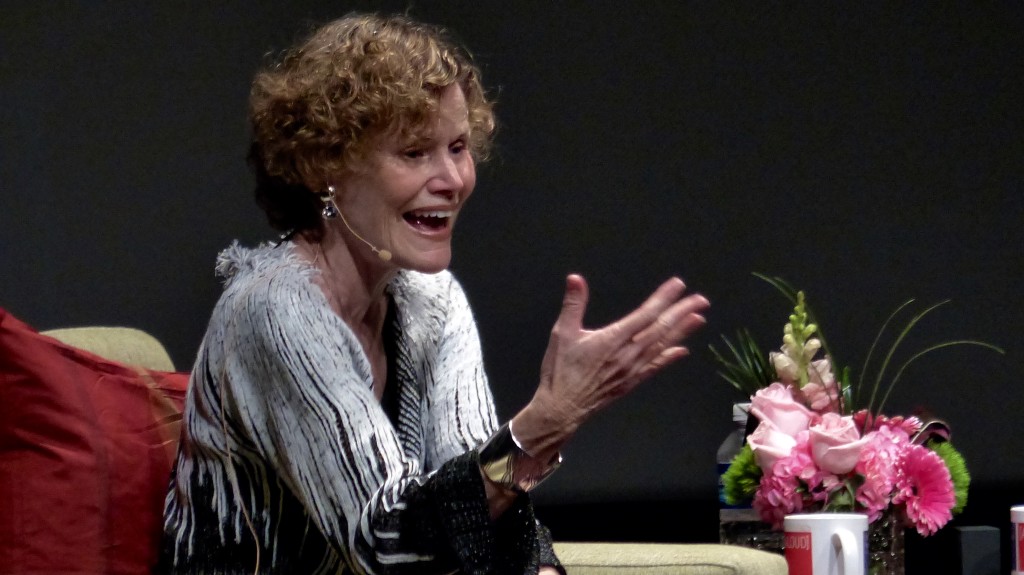 The audience basks in Judy’s energy, mirrors back to her that radiant smile. It’s ladies night out, with a few exceptions–fans of all ages who’ve come to hear about her latest book release, and to reminisce about her prior works.

It’s hard to pigeonhole the author who helped give birth to the Young Adult genre; and by no means would I want to understate the importance of any one of her beloved characters, all of whom helped redefine what it means to live a ‘normal’ childhood. But here are five things I learned about the inimitable Judy Blume last night (and the one thing I wish I’d learned but didn’t).

1. Judy kept a diary as a young girl, same as the main character in her quasi-autobiographical novel, ARE YOU THERE, GOD? IT’S ME, MARGARET. And now that she’s a writer, she creates what she calls “security notebooks.” Chock-full of research findings, character traits, and setting descriptions, they keep her from feeling alone when she faces a blank screen. 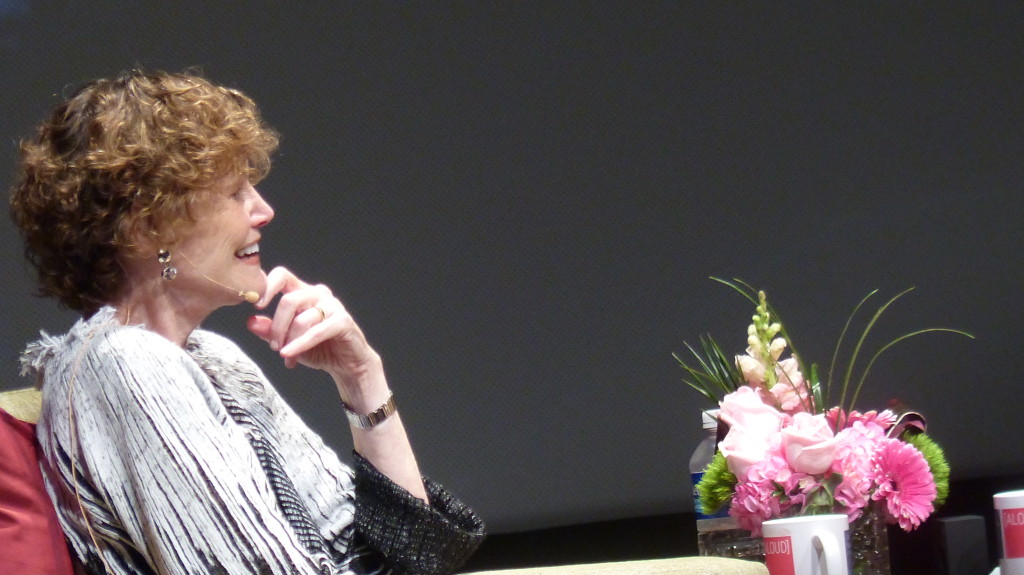 2. About the inevitable setbacks, Judy says, “I was devastated by my first e—um, rejection.” She claps a hand over her mouth, as if to stifle a giggle. “Oops, I was going to say erection.” There’s a short pause, to comedic effect, and then she recites that Highlights Magazine refusal, word for word. “Does not win in competition with others.” The audience erupts in laughter, and Judy grins. #delicious irony

3. Judy’s latest novel, IN THE UNLIKELY EVENT, is based on a trio of plane crashes that occurred in her hometown (Elizabeth, New Jersey) during the 1950s. Inspiration struck her in an unlikely setting, complete in concept and out of the blue. She was listening to author Rachel Kushner talk about her mother’s childhood experiences in Cuba during the 1950s, and boom! There it was. Plot. Structure. Characters. Setting. She knew the storyline, beginning to end. “It was a magical moment,” Judy says. “It never happened to me before, and I don’t know that it’ll ever repeat itself in my lifetime.”

4. Judy Twitters up a storm, famously so, but pangs of nostalgia sometimes hit her. “I still have my IBM Selectric typewriter, “ she says. “Sometimes I open the closet door and whisper, “I still love you.” 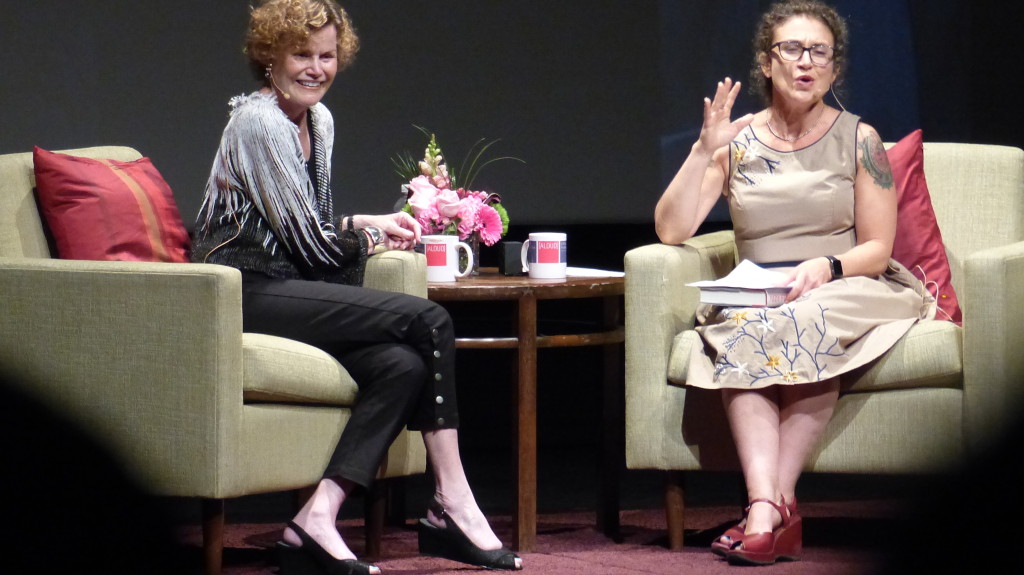 5. About IN THE UNLIKELY EVENT, Judy says, “ I think this is the one I was meant to write , and that maybe all the other books leading up to it were just practice.”

My only regret, as an avid fan who now shares her profession, is that we didn’t get any deep insights into Judy Blume’s writing process. Successful (and beloved) as she is, surely she could spill a few secrets? The moderator asks, as do several audience members. But true to her belief that “writing is a skill that can’t be taught,” Judy doesn’t proffer much advice. ““Dialogue is what I do best, but I honestly don’t know how it happens. It’s whatever works.” 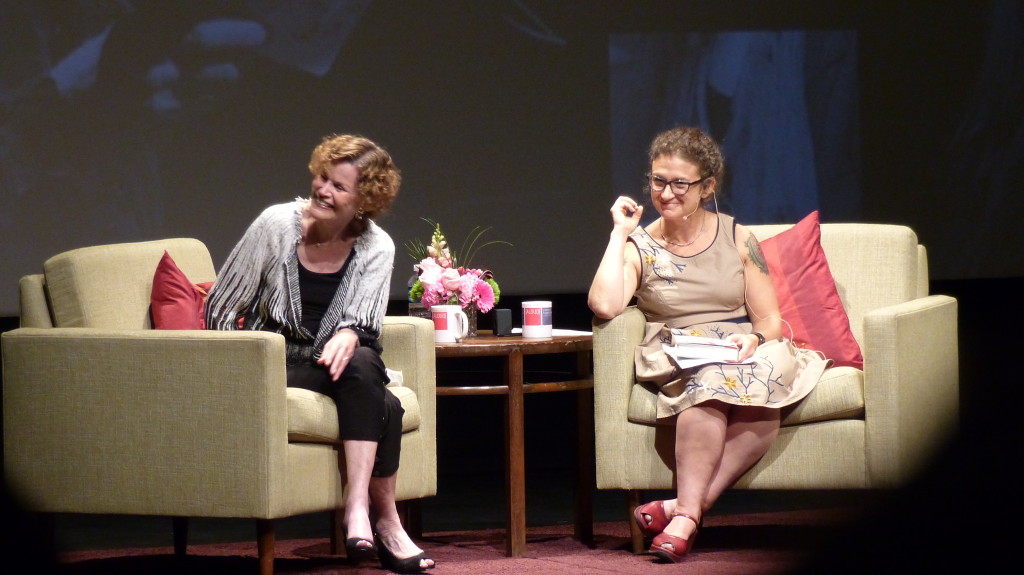 An aspiring author approaches the mic, asks the same question from another angle. Judy seems genuinely perplexed. “You sit there, get the critic and censor off your shoulders, and just write…And you read, read, read.” When pressed for a more detailed answer, Judy explains that she sits at her computer for 2-3 hours, takes a two-mile hike and then treats herself to a tasty breakfast.

“Just a bread crumb more?” someone wheedles. Judy’s response: “You have to have determination… just sit there and try to let it happen.”

It’s not much to go on, but hey, it’s the inimitable Judy Blume! So we cling to every word in the moment, scribble them into our notebooks for later reflection, and honor her wildly successful, singular process by creating one of our own.

NOTE: This program was sponsored by the Library Foundation of Los Angeles. Flash photography was verboten, but we were allowed cameras in this venue. Hence, these pictures, all my own.  Judy’s words, which I’ve placed in quotation marks, aren’t verified against official transcripts, but they come as close to her original statements as I could possibly remember/write.