It was still dark this morning when I snicked the front door open. Just a sliver, mind you–I didn’t want to startle the remaining hatchling, but after two solid days of pounding rain and intermittent winds, I worried that she might be cold and wet. But there she was: cozy as could be inside her dry little nest. How wise Walela was, to have built their cushiony home under a roof overhang!

(This set of two pictures comes from yesterday’s photo session. I didn’t get pictures of Jennifer in the nest this morning.)

Whew, what a relief! With a steaming mug of vanilla-hazelnut coffee at my elbow, I posted a blog update, in which I predicted she’d fledge sometime today.

Not an hour later, my husband called me to the door. The nest was empty! I grabbed my camera and snapped a picture. Just one, inadequate though it might be, to honor the nest that served Walela and her brood so well.

I lowered my camera to my side, and stood silent for a few minutes longer. And here’s where the magic happened, as it so often does when we’re willing to stay in the moment…

Jennifer returned to the fuchsia plant and perched herself on the slimmest of branches! She must’ve sensed Walela’s whirring approach, because with one eye focused on me, she turned her head and opened her beak.

I didn’t capture the feeding itself, but seeing as how I’ve posted so many pictures and videos, here and on Facebook, I’ll bet you can easily imagine it in your mind’s eye by now.

A small part of me is sad, of course. Who wouldn’t be, after cheering them on, for days on end? But more so, I’m celebrating. It rarely happens that both hummingbird hatchlings survive from egg to fledge, so I’m thrilled to know that Sunshine and Jennifer beat the odds.

In you is all of Heaven
Every leaf that falls is given life, in you
Each bird that ever sang… will sing again, in you. —A Course in Miracles

I’m still reveling in my experiences last week with the Harlem Gospel Choir. More to come about that, and soon, but I first need to find adequate words with which to express their shimmering magic. 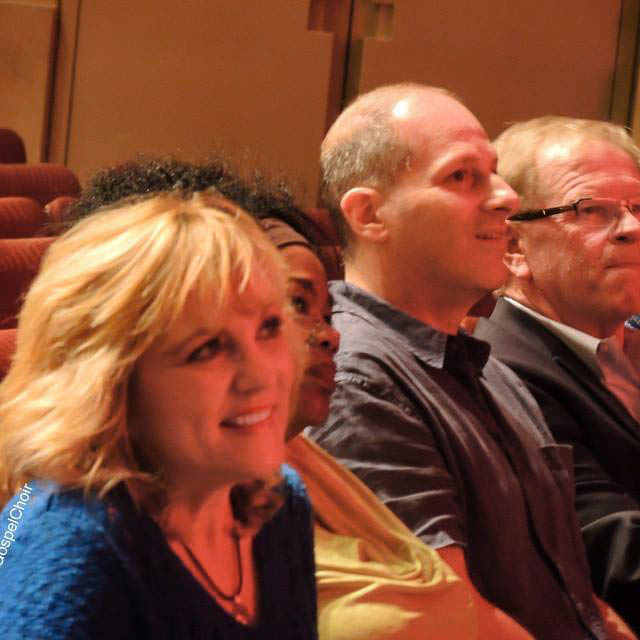 In the meantime, how about a hummingbird hatchling update?

When last we visited their nest together, the siblings were doing flight simulations. Four days later, on February 19th, I witnessed something rare and wonderful.

Walela’s babies been riding the wind currents all day, hanging ten on the edge of their nest. Whew, scary! If the video’s jumpy in a few spots, it’s because I was more than a little nervous. But when the winds died down, the birds were safely ensconced in their nest, seemingly unruffled by their wild ride.

Later that same evening, I climbed our rickety wooden ladder, cell phone snugged to my ear so I could talk to my sister Sheryll while also snapping a few last pictures before nightfall. Quite the balancing act, I must say, but boy howdy, was it worth the effort!

They were playing a game of do-so-do on their cottony perch, when suddenly…well, see for yourself. The bigger hatchling hovered over its sibling for just a few seconds, propelled itself backward and then soared on tiny wings over the red tile roof that sheltered it, from egg to fledge, in Walela’s nest.

The next morning, our new fledgling had nestled into the birdbath beyond my kitchen window, about 15 feet from its former home. Sheryll called it Sunshine, and that seems fitting for this tiny bird with shimmery feathers. (I took this next sequence of pictures through my front window, so they’re a bit blurry. But oh, are you as happy to see him flourishing as I am?)

Walela’s nurturing her baby while it gets acclimated to life beyond the nest, as mamas are wont to do.

Over the next several days, she’ll show Sunshine how to forage for food and survive on its own in the wild.

Hovercraft mama that she is, Walela also watches over the hatchling that remains in the nest, preening its pinfeathers and practicing flight maneuvers on its own.

Here’s what it looked like, the day after its sibling fledged. Lonely, you think?

We’ve since decided to call her Jennifer (“Jenny”), in memory of Reverend Jennifer Durant, who inspired many, living with ALS as she did–with a featherlight spirit and a heart filled with joy.

She still has a few pinfeathers tucked into her tail, but I suspect Jenny will be taking to the skies sometime today or tomorrow.