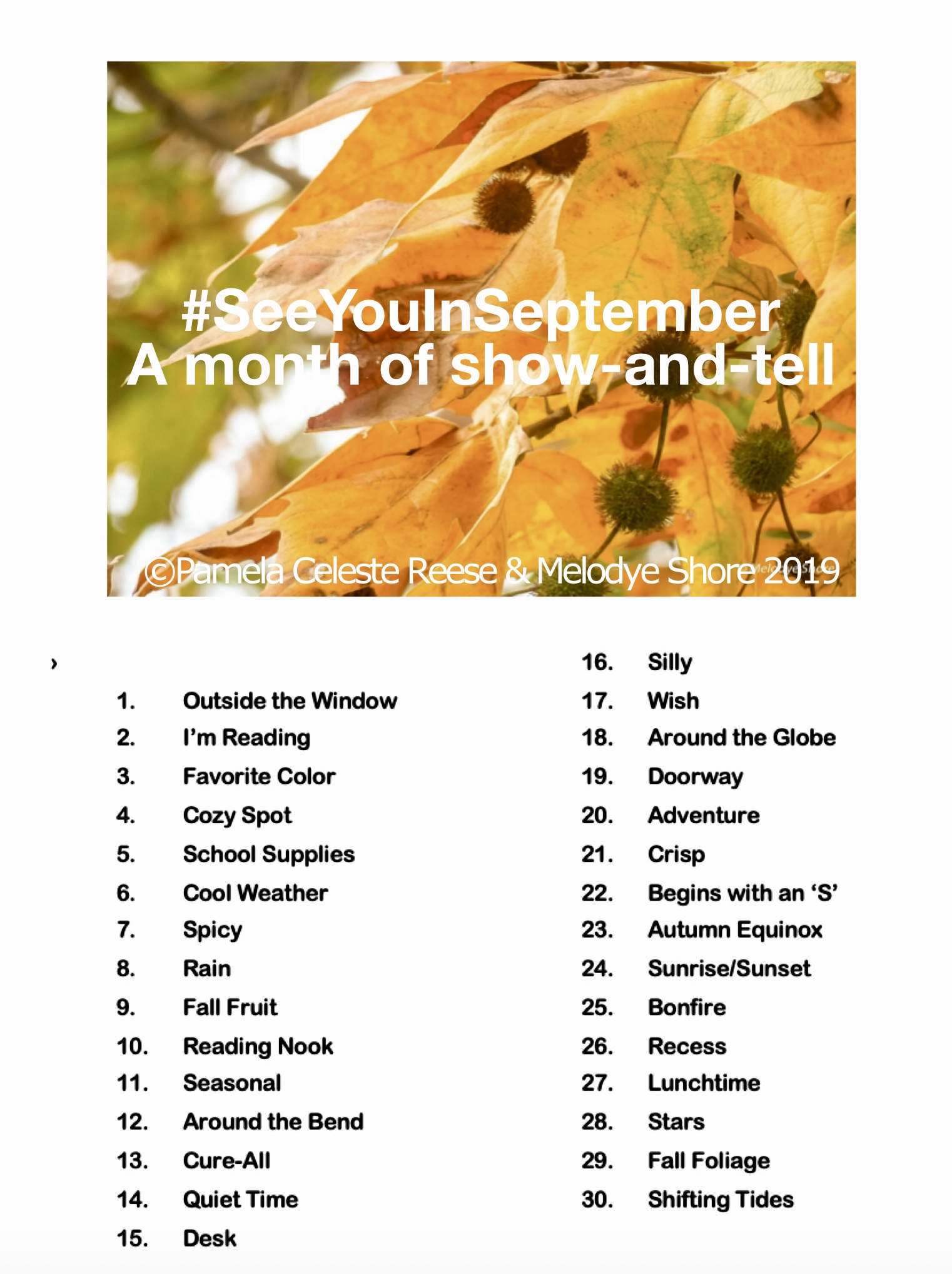 If you enjoyed Susannah Conway’s #AugustBreak2019, please consider joining us for a month of show-and-tell.

#SeeYouInSeptember is about creating new connections, and seeing the world through different lenses. It’s easy-peasy: Just translate the daily phrases into photos, and then upload them to social media with our hashtag. No need for costly equipment–a cellphone camera will do. Think of it as recess for your imagination, which always wants to play.

Skip a day or two, if you wanna, but remember to add the hashtag #SeeYouInSeptember. That’s how we’ll find each other! Reveal to us your magic tricks/apps, if you’re so inclined. And psst, don’t forget to add the daily word/phrase!

Sound good? Let’s do this! Here’s a quick example, to help get you started:

I’m reading…several books at a time. And you? #ImReading is the prompt for Day 2 of the #SeeYouInSeptember photo challenge (I snapped this with my iPhone and added a fun overlay with the Rhonna Designs Magic app.)

(Thanks, Pamela Celeste Reese, for co-creating this month’s challenges with me. Can’t wait to see where this one leads us, and to meet new friends along the way!) 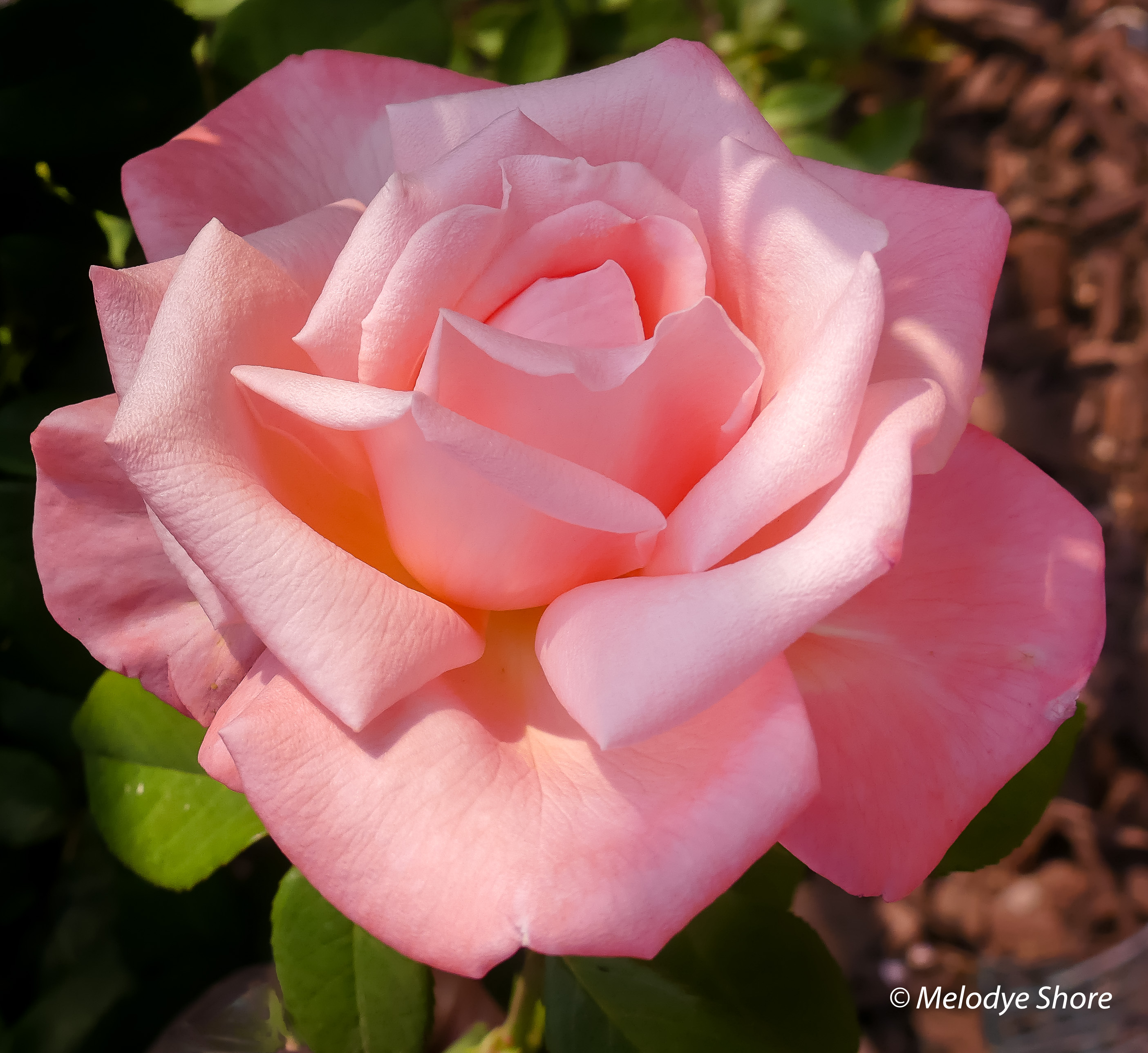 Today’s theme for #AugustBreak2019 is PINK. Susannah Conway founded this event several years ago; and while I’ve always enjoyed the artistic challenge, I love best that when I scroll through my social media feeds, I’m meeting up with creatives who, like me, are exploring ideas and techniques that move them past their comfort zones. Not to mention, it’s so much fun to peer through their windows on the world!

Here’s the deets…wanna join us? Just create a photographic image that somehow illustrates the theme of the day, and then share it on your favorite social media networks. Easy-peasy. No need to use a high-end camera–a cell phone snap is totally fine! Simple or abstract, fancy or straightforward…you get to translate the daily prompt however you want. It’s group play, but even better, because you get to make up your own rules!

If we were sharing a quiet dinner in a neighborhood restaurant, I’d lean forward at some point, speaking in a lowered voice so our conversation didn’t carry. “Are you as scared as I am?” I’d ask.

You might rest your hand on mine, a reassuring gesture.  But if you’re someone with a penchant for upheaval, you might brush aside my concerns with a dismissive wave. “We needed someone to shake things up!” you’d say, and even though we might disagree about that underlying premise, we’d find a way to navigate our differences. As friends do. And at the end of the night, we’d hug it out, energized as always by a shared commitment to the greater good.

But virtual meet-ups are different, aren’t they? We can’t read facial expressions. We can’t hear the subtle changes in pitch and tone, and we miss the subtle pauses. We can’t meet each other’s eyes, and we can’t translate what we don’t see.

I’m going to trust you, though, to push past those limitations. As friends do. I’m not expecting you to compromise your own views, but at this virtual dinner, please allow me this moment of grace.

You’d probably notice my furrowed brow, were we to sit across the table from one another. “What’s on your mind,” you might reasonably ask, and while I’d probably start by talking about seals and such, I’d eventually wade into rougher waters.

What’s on my mind? Lemme tell you… I’m deeply concerned about the direction our country is headed. I am mourning the fact that we’ve lost our way, and I’m frightened about the cold, dark place in which we’ve found ourselves this weekend. I hear the drumbeats of war, drawing ever closer. White supremacists roam our streets unmasked–emboldened by a president who refuses to condemn their actions and instead offers a statement against “violence on all sides.” Politicians refuse to step into the breach, and religious leaders are strangely silent. I’m as scared as I’ve ever been, and oh, how I wish Hillary Clinton had shattered that highest, hardest glass ceiling!

This isn’t a fresh concern, mind you. I’ve been troubled by this presidency since Day One.

I worked for the Hillary Clinton campaign for a reason. She represents my deepest hopes and highest ideals. Plus, she’s smart and sassy, and better-equipped, by far.  Not without her faults, but who is? She’s as imperfectly perfect as they come. Like many Americans, I was elated about her winning the popular vote, but when she ultimately lost the electoral college to a huckster, that elation quickly turned to despair.

No surprise, when I read the prompt for Susanne Conway’s photography challenge, those  emotions bubbled to the surface again.

God forgive me for not thinking of my grandkids first, but this is the first image that came to mind. 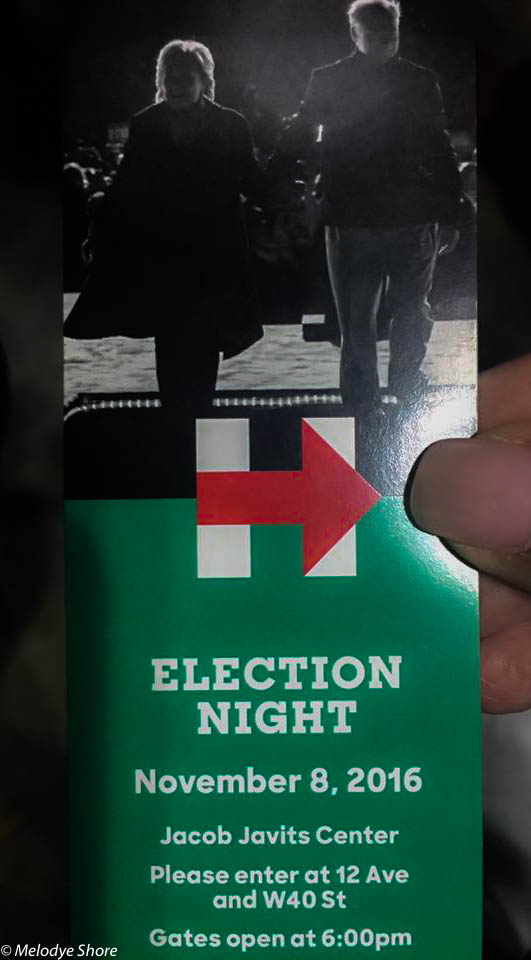 My friend and I spent countless hours supporting the Hillary Clinton campaign. How exciting, to be on location for this event! We were joined by countless Americans, gathered around their television sets (or and hunched over their electronic devices), fully expecting that we’d be celebrating a big win. But there was a deep rumbling that night, and a shaking. Our dreams were crushed by the weight of unseen forces.

We walked back to the hotel together in silence, blanketed by wooly clouds that offered little in the way of comfort. I zipped my coat against the cold, wrapped my scarf a little tighter. An outsized rat skittered across the sidewalk, baring needle-sharp teeth as it defended its right to the trash bags heaped at the curb. The Empire State Building–alternating floors glowing blue and red before the polls closed—was awash in angry red.

That was then, and this is now. I’m not dwelling on that night, but I’m mindful of its significance. I’d be hard-pressed to explain how much our country has shifted, folded in on itself, and slid backward. And tonight…well, I’m glad tonight for the warmth and glow of your friendship, because my typically optimistic outlook is a bit faded around the edges.

Everything looks brighter in the morning–that’s what my Nana always said. But if we were to linger over coffee tonight, we’d probably explore this at some length. We’d laugh; we’d cry. I’d give you side-eye and you’d tell me to hush. We’d eventually fall into a comfortable silence, but not before I asked you to share your One Wish with me. As friends do. Then we’d ask the waiter to bring us a gooey, guilt-free slice of cake. With extra forks, please, and glow-in-the-dark candles.

Sunlight spreads itself across the neighboring hillsides, nudging the earth out of its slumber. A hummingbird glides easily between palm dates and salvia, chittering as it sips nectar, and I celebrate with her the sweetness of this new day. 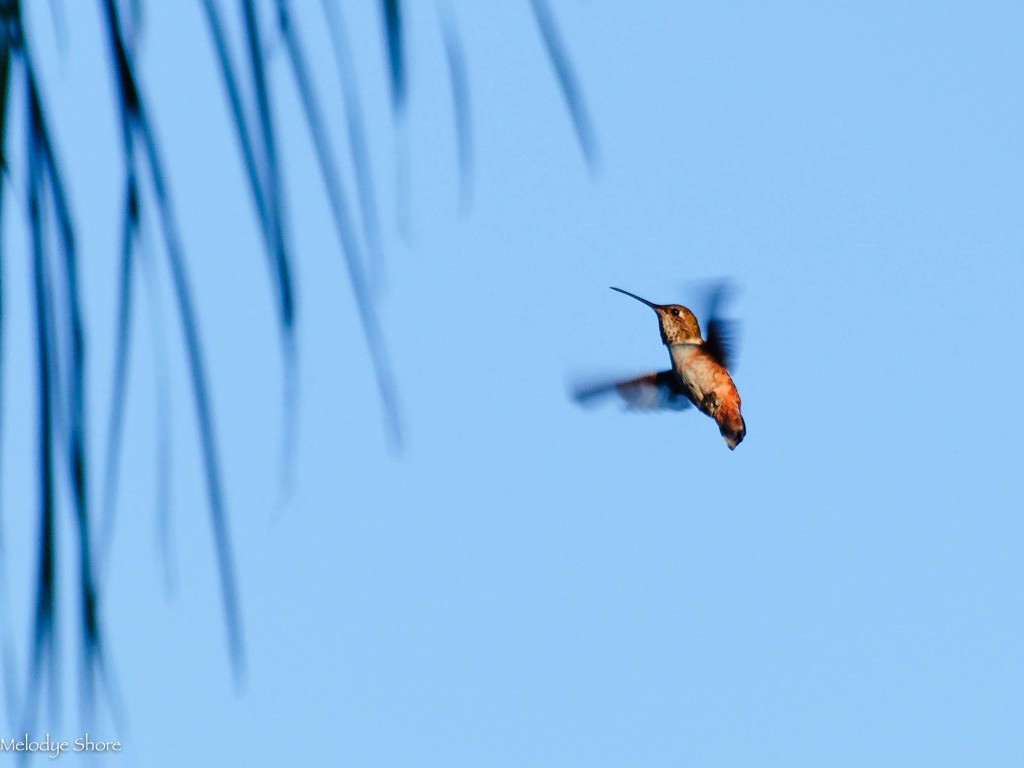 This is my first entry in the monthlong, collaborative photography project,  “August Break 2016,” a mindfulness activity that draws participants away from their daily routines and into the wider world. Inspired by a specific prompt, you snap a new photograph every day in August.  No need for fancy equipment, and you can bend the rules to suit your needs or interests.

I’m using Susannah Conway’s #AugustBreak2016 as an opportunity to practice something I’ve struggled with: capturing sharp images of hummingbirds in flight. I’ll also be spending lots of time at my writing desk, polishing up a special project. Each creative act, inspiring and informing the other…

Some of you might remember that I participated last year. Aside from the healthful benefits of venturing outdoors, those photography outings had carry-over effects on my writing, all for the good. Focus. Experimenting with light and dark. Seeing things from different angles, and expressing myself in new ways.

If this sparks your own creative urges, I hope you’ll grab your camera and join us!