In the gauzy hour before sunrise, our shuttle pulls into the circular driveway of Ronald Reagan Medical Center. Streetlamps twinkle on shiny poles, and polished travertine gleams in our headlights. My husband collects his pre-op instructions; I give his hand a gentle squeeze. Sirens wail. Paramedics lower a gurney from an ambulance, and the hospital doors whoosh open, bathing everyone in light. 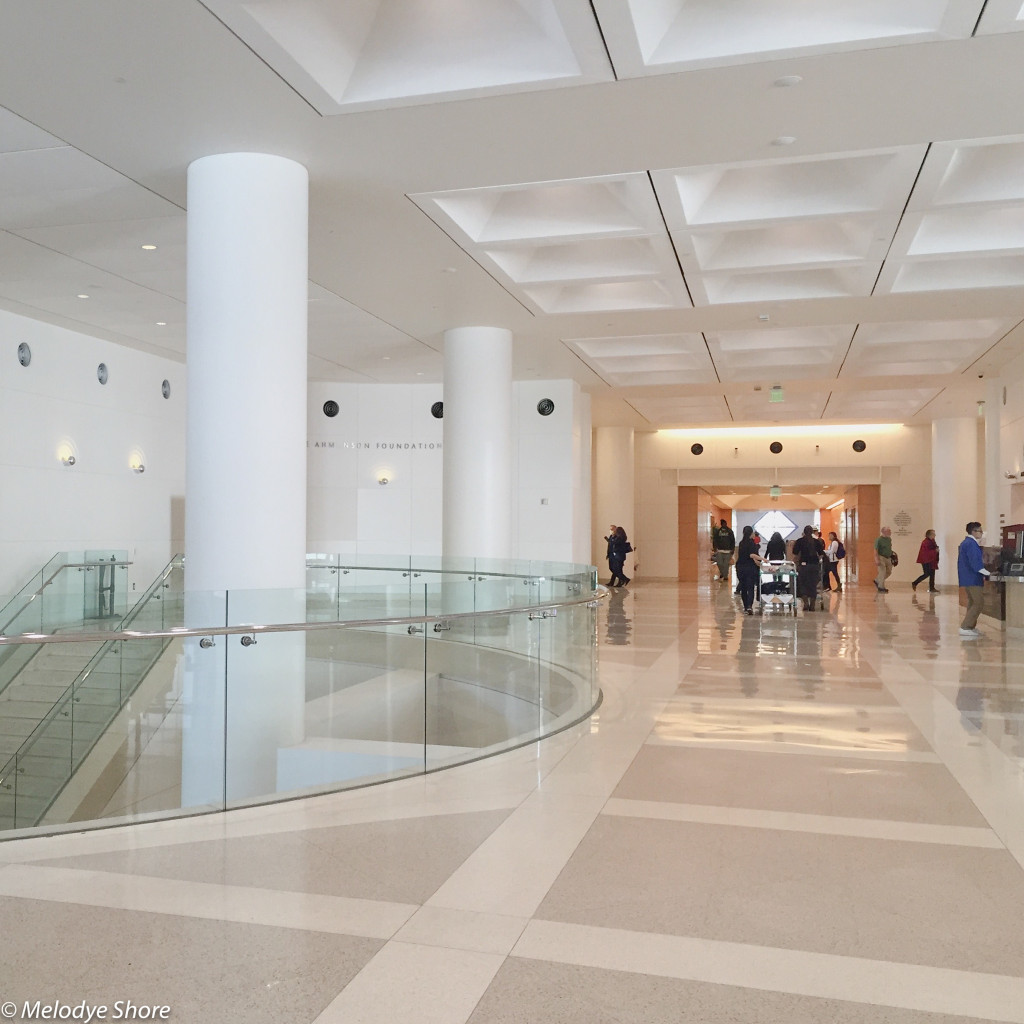 Hollywood-style glitz, more often associated with its namesake than your typical hospital

Here, staff members treat surgical patients with the same accord as trauma patients, who get the same level of care as celebrities who roll up to the entrance in chauffer-driven Bentleys. Stretched by limited space and overwhelming demand, staff members nevertheless find a way to share a deep appreciation for the human beings that occupy their beds. “What’s your story?” finds its harmony in the oft-repeated, “How can I help you?” 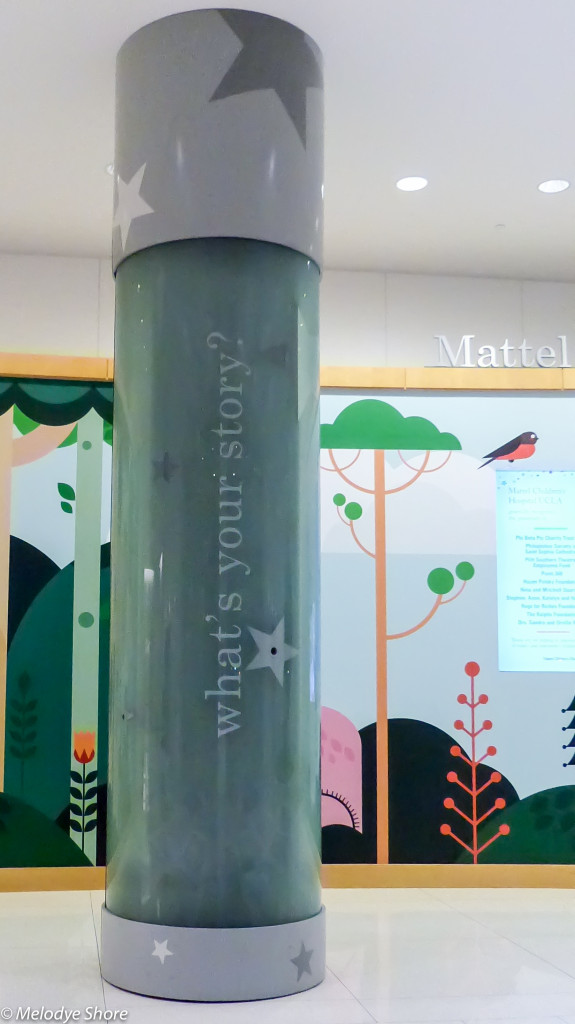 Several hours later, I find myself pacing the length of the recovery unit. A grizzled man clings to an IV pole, winces as he shuffles past me, pivots, and matches his steps to mine. “Way to go,” I say, and he gives me a wan smile.

“I was born in the original UCLA hospital,” I say.

“Don’t date yourself,” he warns.

We walk together in silence, but before long, he’s describing for me a harrowing tour of duty in Vietnam. He’d signed up for the military after high school—same as his daddy, and his granddaddy before him. But while he didn’t expect a hero’s welcome when he returned home as a decorated paratrooper, neither did he expect to be pelted with glass bottles, verbal expletives, and spit. He shrugs, scratches the tattoos that span the length of his arms, says his heart transplant was probably caused by stress. But he is quick to reassure me that the protesters hadn’t broken his spirit. He is proud of his children, and several grandchildren look up to him, now.

We linger in my husband’s doorway, talking softly while he emerges from his anesthesia haze. A nurse swoops in, repositions the cotton gown around his shoulders, offers him water, and fluffs his pillows. Eric opens his eyes, gives me a weak smile that says, roughly translated: “I love you. We made it.”

They are worlds apart, my husband and this wounded veteran. Their paths converged in this hospital because of health concerns, nothing more. Their prognoses are good. They have everything in the world to live for, and they know it.

Believe it or not, the same can be said for the people who huddle inside these temporary quarters, parallel-parked on a road less travelled. 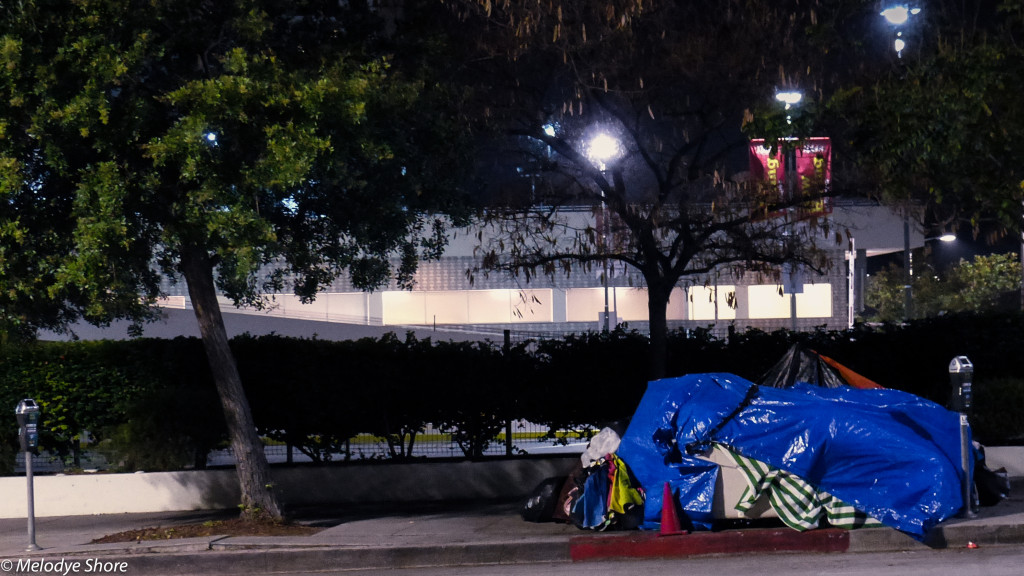 You’ve perhaps seen this kind of encampment on your way to work: a derelict dwelling that afflicts the comfortable. Most people avert their eyes as they hurry past…but I don’t.

What I’m about to tell you might come as a surprise to some, given that I most often blog about hummingbirds and butterflies, wonders of nature and writerly stuff.

As the daughter of an itinerant preacher, I’m intimately familiar with the musky odors of makeshift quarters like these. I’ve experienced poverty so severe that it creeps into your psyche, have endured hunger pangs so severe that they feel like a shank to the belly. I spent a good portion of my childhood in the margins, wholly dependent on the kindnesses of strangers. Despite–or maybe because of all this–I cling to the comforting words of my Nana: “In the darkest nights of winter, watch the skies and listen for the robins.”

Nana taught me to lean in the direction of things that are “lovely, honest, and true,” to believe, without wavering, that “joy cometh in the morning.” She never stood in the pulpit, but by her example, I learned the simple elegance of the Golden Rule. It’s the gold standard, when it comes to taking the measure of your life. 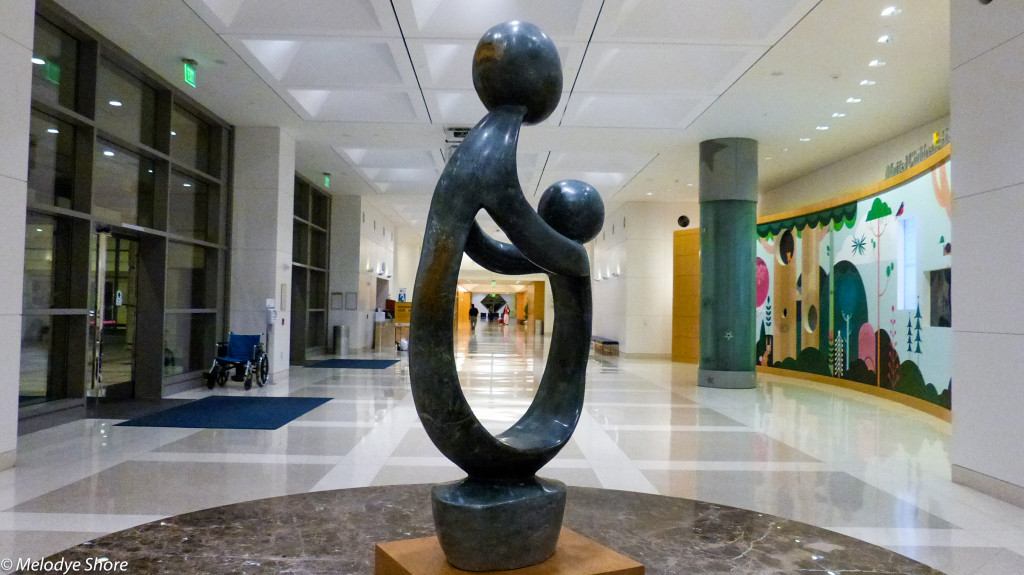 I’m not afraid to venture into neighborhoods best known for crumbling sidewalks, ghost signs and hazard cones, and curbs so steeped in garbage that you turn your ankle when you step into the street against the light. Call me reckless if you will, but I’m not afraid to venture into darkness to serve “the least of these.” I love the whirr of iridescent wings, but this is the pulse of my life.

Rarely has any of this made its way into my blog–not explicitly, anyway–for reasons I’d rather not go into right now. Mary Oliver once said: “Write for whatever holy things you believe in.” I’ve always done that, sometimes in broader strokes than others. But the events of this past weekend have inspired me to put a finer point on things this morning.

All that to say: when I sprinkle candies over a swirl of frozen yogurt (to celebrate my husband’s homecoming), I also toss a large wedge of gourmet Swiss cheese into the grocery cart. An impulse buy, for total strangers.

I keep a respectful distance, smiled as I peer into the shadows. “Hi, my name is Melodye,” I say, “Do either of you like cheese?” 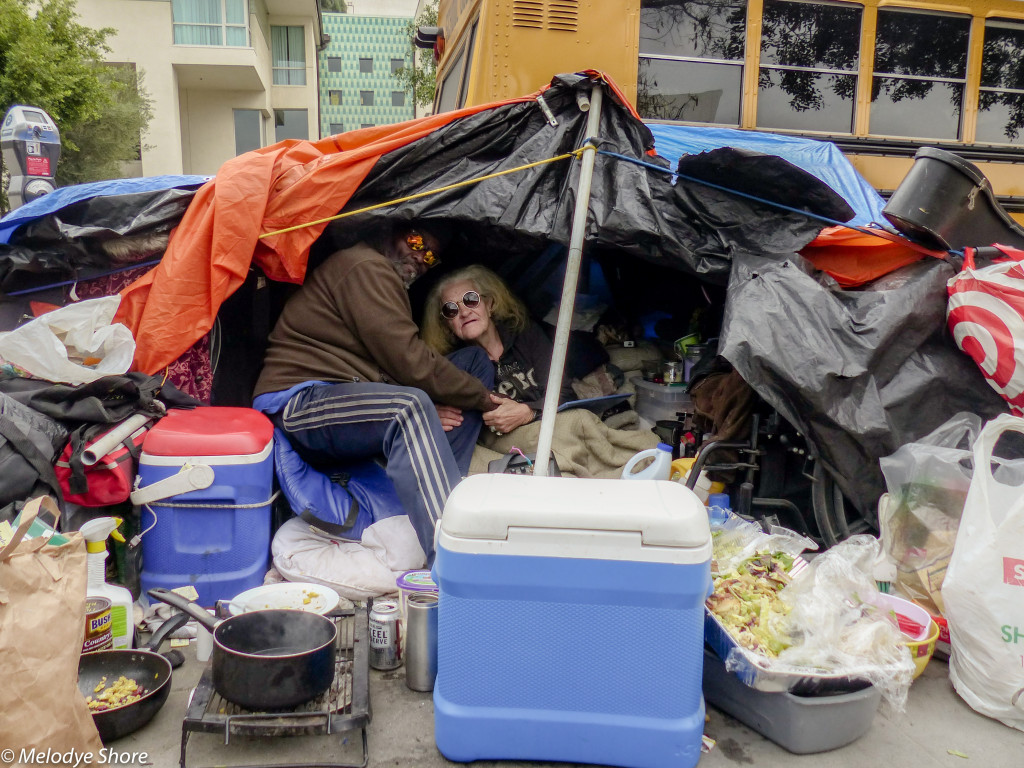 Four hands, light and dark, stretch beyond the portal of the tent. A wordless answer, easily translated.

We exchange names, share a few pleasantries, and then I retreat to the warmth of my car. New friendships need oxygen, and grace. 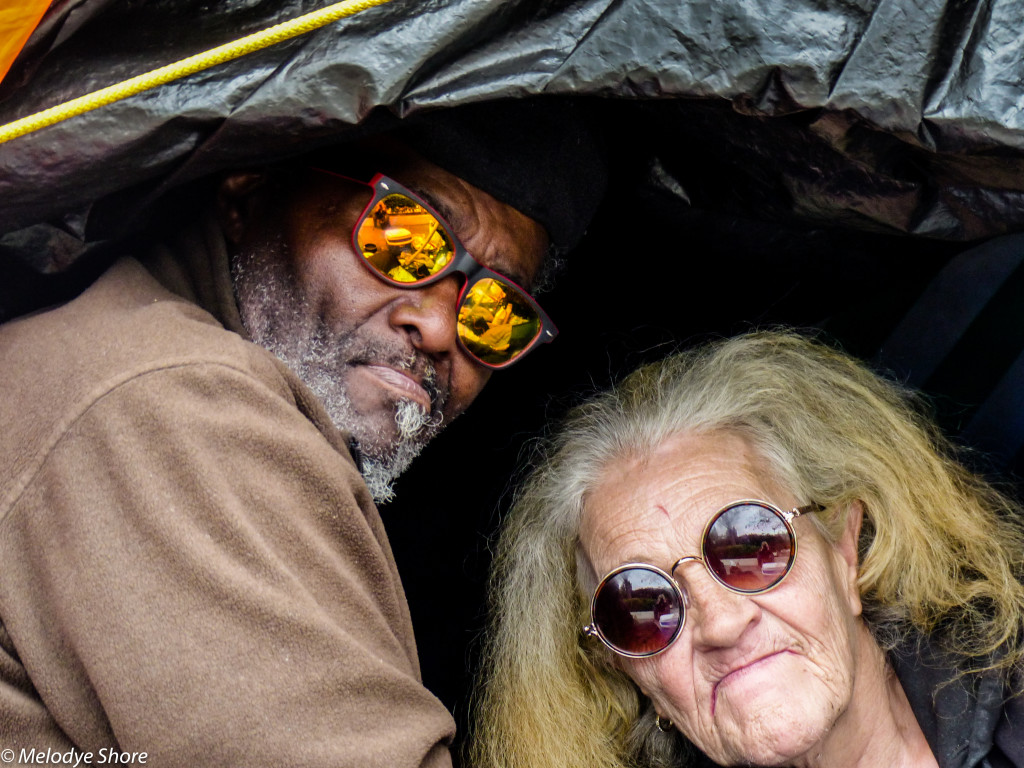 In Inky and Starr’s mirrored sunglasses, I see reflections of our shared humanity.

Storm clouds cover the sun with a wooly-gray blanket. Heavy winds lift the edges of the tarp. My husband’s discharge process takes longer than expected, and as I tap-tap-tap my fingers on the steering wheel, my heart tugs me in the direction of their curbside home. Again. I cut the engine, shove my keys into my purse, grab my camera, and cross the street. 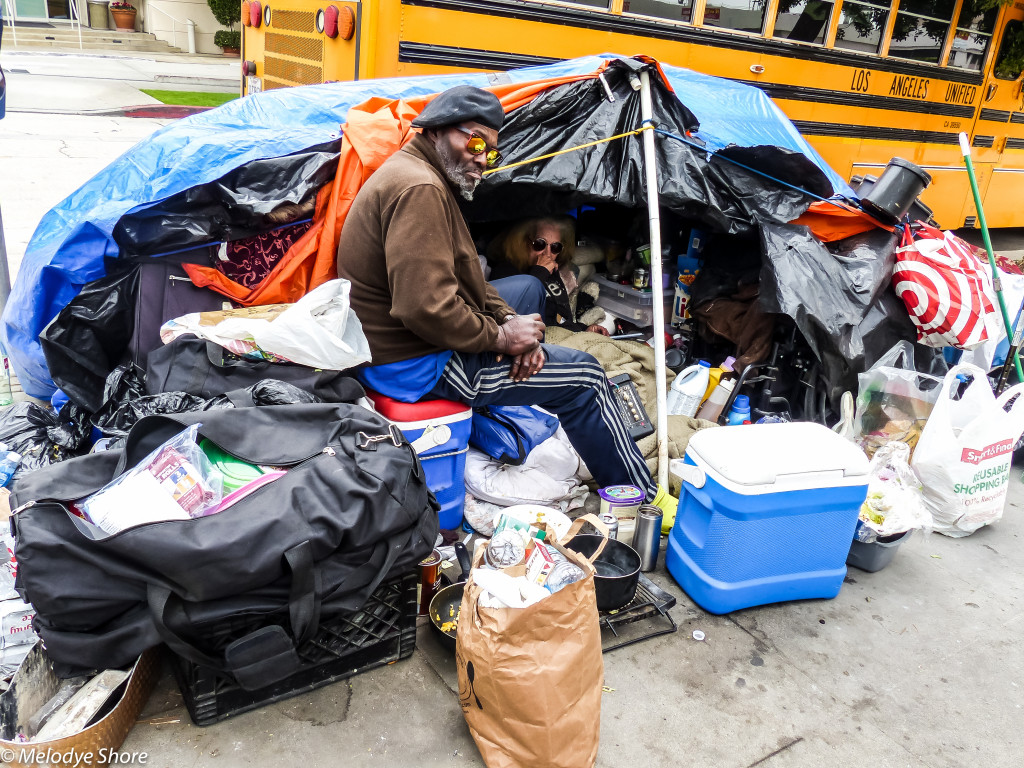 We warm ourselves around a makeshift grill, spin yarns about our childhoods, and muse about the events that brought us all together. They’d met two years ago, Starr tells me, at a bus stop in Hollywood. Inky gives her shoulders an affectionate squeeze, “I’ve been looking for her for all my life,” he says, “and we’ll be together for always.”

“Would you mind if I take your picture?” I ask. “And maybe take a short video, so I can share your story with my friends?”

Inky flings his arms open, fingers splayed, and flashes an open-mouthed grin. “Sure,” he says. Starr nods, with no hesitation whatsoever. So I switch my camera to video mode, and press the shutter button. The result is this unedited clip–not inclusive of everything we covered in our earlier conversation, but enough for you to get better acquainted. Roll straight through to the end, and you might learn something new about me, too. I’ve never fielded this question publicly, but his curiosity was genuine, and disarming…

Call them serendipitous, call them happenstance or good luck. But the truth is, these seemingly random encounters occur more often than anyone (aside from my closest friends and family members) might guess. My husband calls them “a Melodye thing.” I call them shivery magic–miracles that come of flinging your heart’s door wide open, and basking in the light.