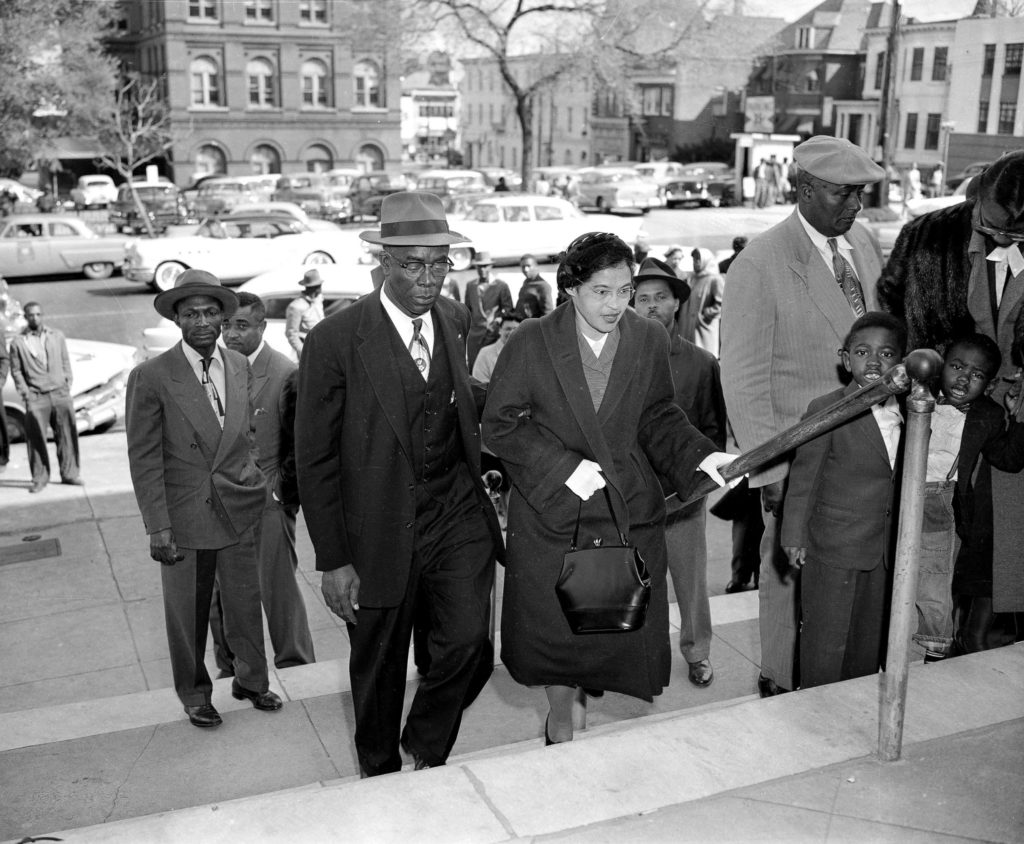 Rosa Parks arrives at the Montgomery, AL courthouse for her trial in the racial bus boycott. (Photo Credit: AP News)

When Reverend Al Sharpton spoke at Rosa Park’s funeral, I was touched by his tribute to her courage and legacy – and I was inspired by the challenge he laid out for the rest of us:

On March 21, I’m headed to Sacramento to fulfill my own Rosa Resolution.

I’m going to climb the state capitol steps; I’m going to haunt its corridors. I’m going to speak to State legislators about a matter of great personal significance, while also suggesting a better path forward for the people of California. I’m going to speak with a passion born of tragedy, outlining the importance of passing a bill I’m proposing.

You might reasonably assume that no school would want the black eye that comes of playing violent, convicted felons on their teams. Surely, no coaches would want to put themselves in this situation, given that they’d potentially endanger other students and college staff. And given the moral codes of conduct and eligibility requirements to which college coaches and athletes are bound, it logically follows that dangerous criminals would be scrubbed from team rosters.

But I know now that none of these assumptions are true. That’s why Assembly Member Jay La Suer (San Diego) agreed to author this legislation, and that’s why I’m making this trip.

This legislation has its origins in a traumatic personal experience. Namely, in late 2004, my son was a victim of a vicious and unprovoked assault by several members of a community college football team. He suffered significant injuries, for which he required major surgery and ongoing medical attention. Thanks to San Diego investigators and the District Attorney’s office, three of the thugs involved in the assault were identified, prosecuted, and sent to jail on felony convictions. And thankfully, my son has healed.

Nevertheless, we remain appalled by what we learned about the coach’s conduct in the aftermath of that felonious crime.  We are still upset about the hands-off, dismissive attitude we encountered when we approached the statewide commission on athletics, asking for their advice and proposing changes.

The actual assault occurred off campus and, speaking in purely legal terms, the college bore no responsibility for the actions of its athletes beyond their participation in school-sanctioned events. But when approached by a detective about the assault, the coach came to the defense of his players, telling the detective that the “spoiled white boys [victims] probably deserved a beating.”

Two of the three felons were arrested on campus, in front of the whole football team. This is a fact, confirmed by the football coach and the criminals themselves, in sworn testimony and other settings. The criminals eventually pled guilty to felony assault. This is not in dispute. But as they awaited their sentencing, at least two of the thugs were allowed to remain on the football team, playing game after game without penalty.  Coach Jordan’s team actually won the National Championship that year, carried to victory on the backs of convicted felons!

When confronted by the news media, the coach first denied playing at least one of them, and then said, “Maybe if they were my star quarterbacks, I would have paid more attention,” and “I guess I figured if they weren’t in jail, they were all right [to play].

To my shock and dismay, I discovered that Jordan wasn’t alone in his cavalier attitude. When we approached the statewide commission on athletics about the incident — questioning the coach’s conduct and his athletes’ ongoing eligibility–officials said that it was “up to each institution” to enforce the association’s moral codes of conduct and to monitor their rules for athletic eligibility. A spokesperson for the NCAA told me essentially the same thing.

This culture of complicity apparently made it easier for Coach Jordan to shrug off the charges leveled at his athletes, and to abdicate any personal responsibility. In citing this incident among others, the Los Angeles Times suggested that this wink-and-nod behavior is supported by a sports culture that promotes winning at any cost. But I refuse to accept the status quo, going forward.

And so it is that I’ve made this Rosa Resolution: I’ll work with legislators to create a law that governs athletes’ eligibility in similar circumstances. I’ll help pass a law that requires coaches and educational institutions to shoulder their responsibilities, instead of shirking them.  In taking the matter beyond my front doorstep and to the steps of the state capitol, I’ll do what I can to help protect all citizens from situations like the one my family experienced.

Assembly Bill 2165 would prohibit student athletes from participating as a member of any intercollegiate team, or as a participant in any intercollegiate athletic event if, after enrolling in a public California college or university they (a) are prosecuted as an adult and (b) are convicted of a violent crime, such as murder, kidnapping, robbery, battery against a sports official, assault with a deadly weapon, rape, burglary, or attempted murder. I’m going to work tirelessly, fighting with all my might to ensure its passage.

I hope my Rosa Resolution is one that would make her proud.