Before I built a wall I’d ask to know
What I was walling in or walling out,
And to whom I was like to give offense. (Robert Frost, Mending Wall)

I visited Children’s Pool Beach in La Jolla this past Tuesday–what an eye-opening, heart-expanding trip!

This charming little enclave was a well-intentioned, but perhaps shortsighted, gift to the people of San Diego, back in 1931. In funding this project, Ellen Browning Scripps brought a personal dream to fruition:  a protected beach for children, the elderly, and “those handicapped in life’s game.”

Ellen didn’t own the property, mind you. She just laid out the cash for the 330-foot, crescent-shaped concrete wall that hugs the rocky shoreline. 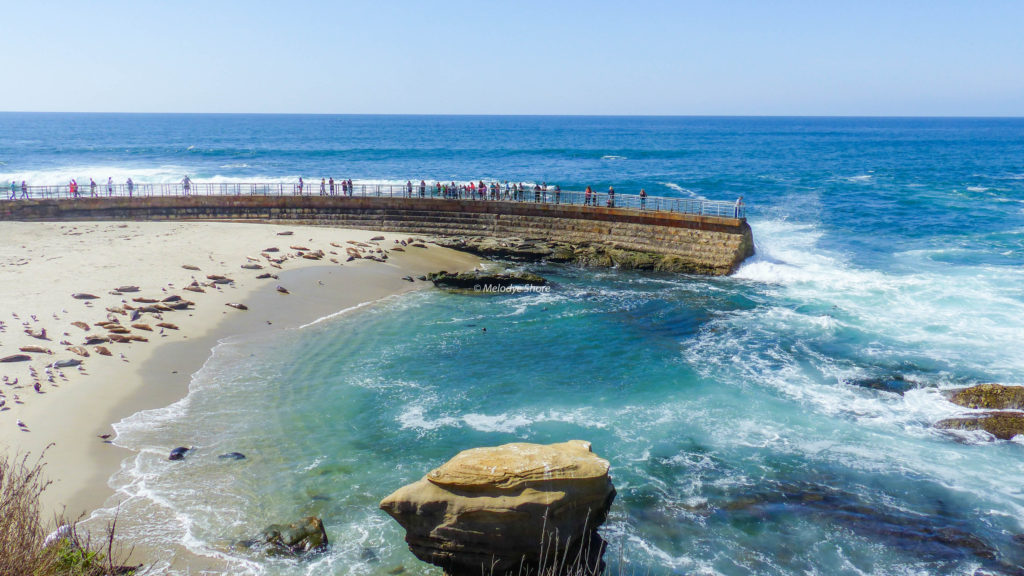 Then as now, visitors strolled the length of the breakwater, snapping photos of the sweeping panoramic views and peeking into the tide pools below [video]. 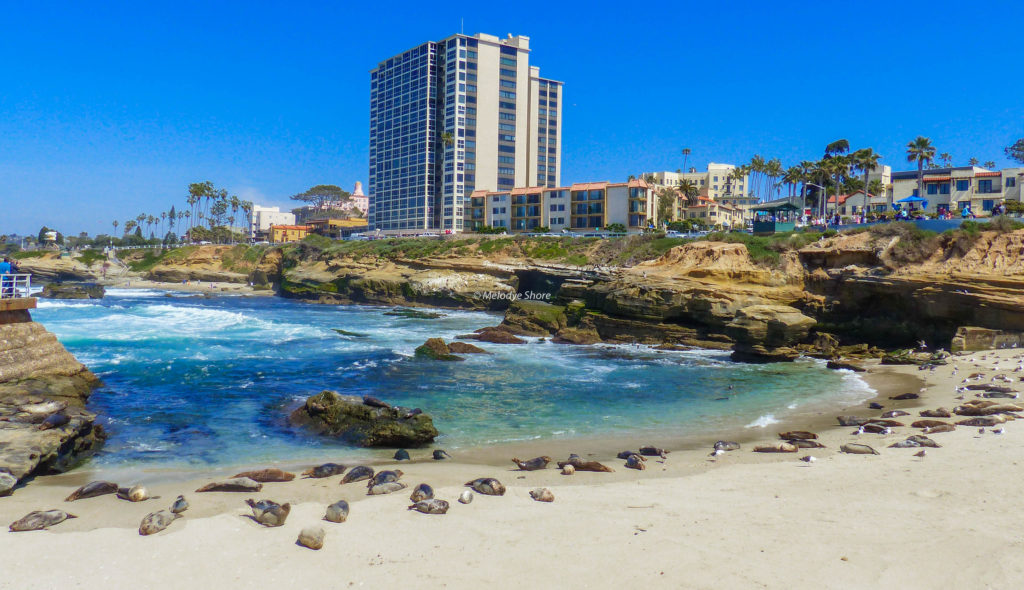 It eventually transformed itself into an idyllic hangout…for harbor seals.

The horseshoe-shaped inlet (also known as Casa Beach) is perfectly suited to the pinniped lifestyle.  They bask in year-round sunshine, mate, and give swimming lessons to their newborn pups. 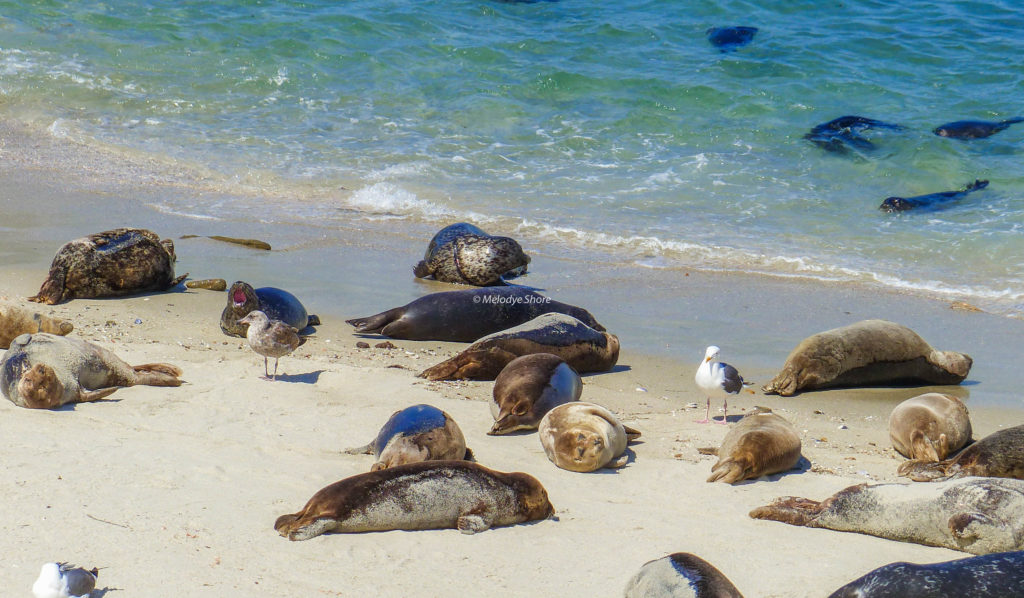 Check out the scene, in this live-action video.

Seal pups are born in the sand,  nurse within minutes, and take their first swimming lessons within a few hours. 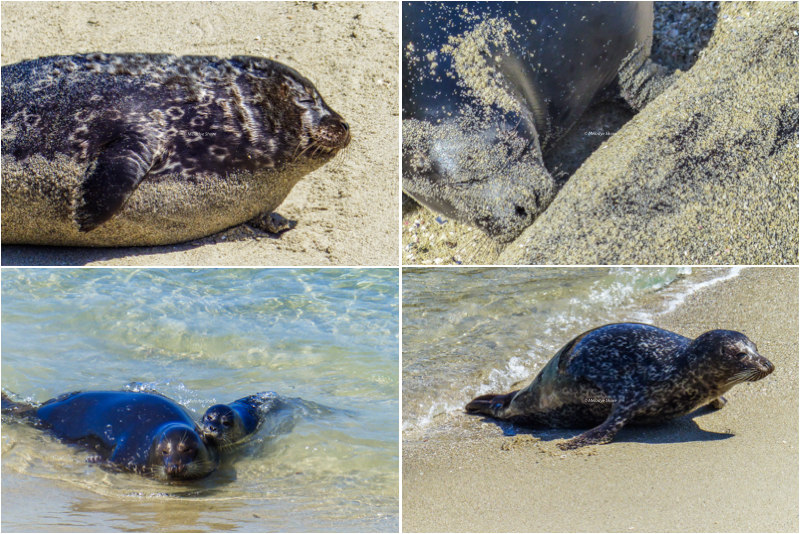 Over the next few weeks, they’ll lose their downy fur and gain their independence. 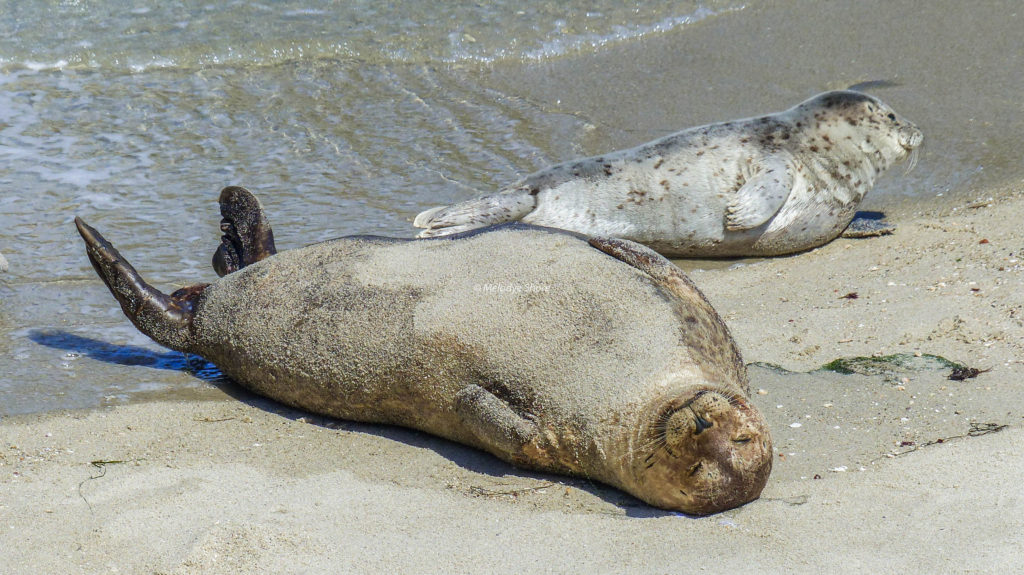 But in the meantime, the breakwater helps protect them from predators and turbulent seas. 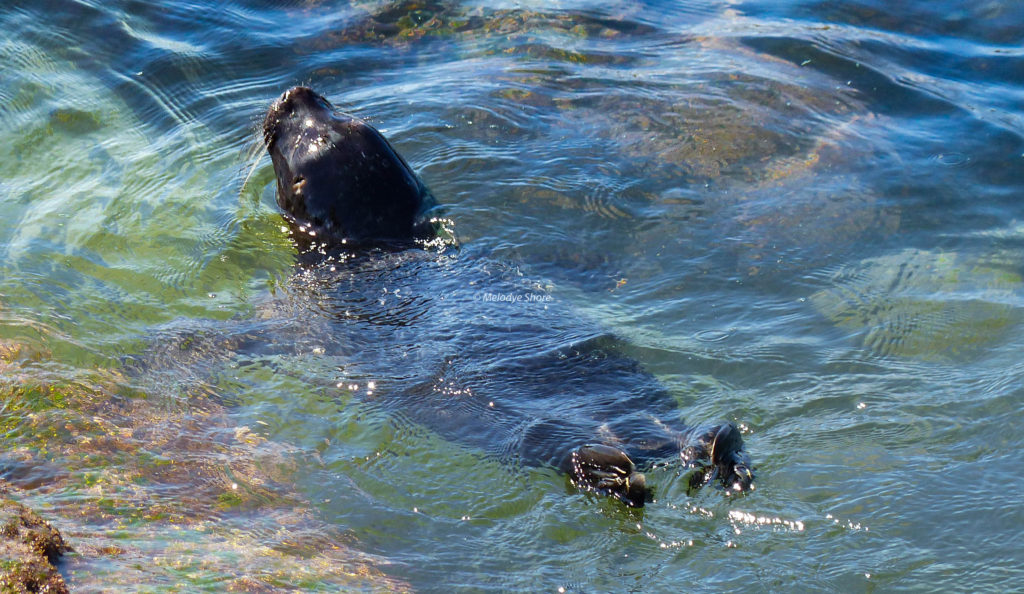 In this peaceable kingdom, sea birds and marine mammals find ways to co-exist, with only an occasional squabble. 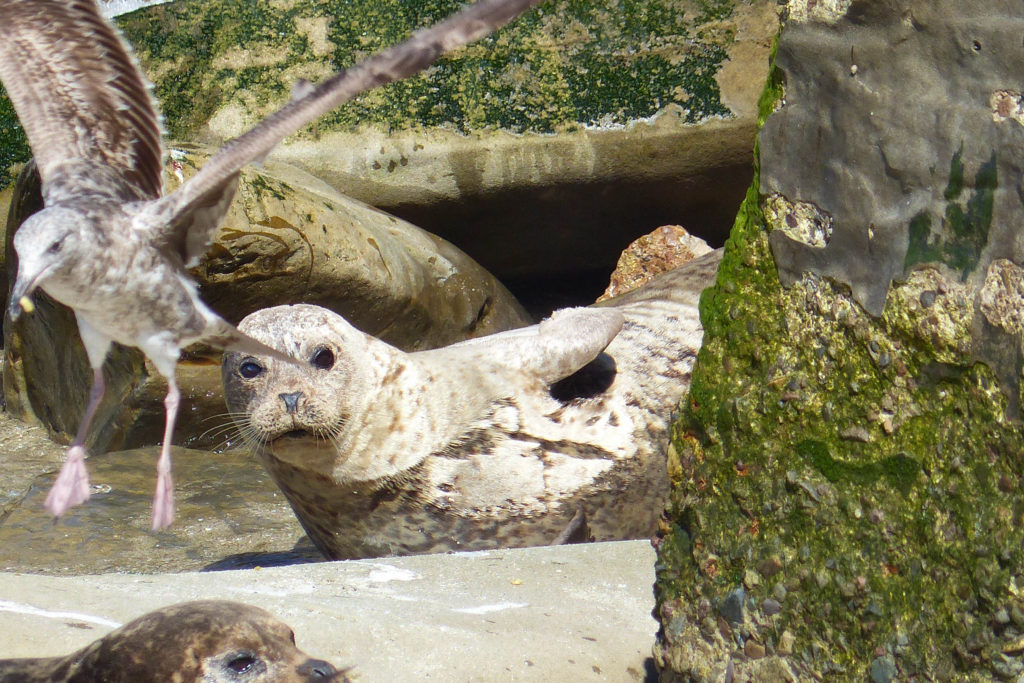 No surprise, the harbor seal pups are a major draw. In fact, they helped turn Children’s Beach into a major tourist attraction.

Just look at this mama seal being shadowed by her pup. Postcard material, don’t you think? Hashtag: #HarborSealsofInstagram 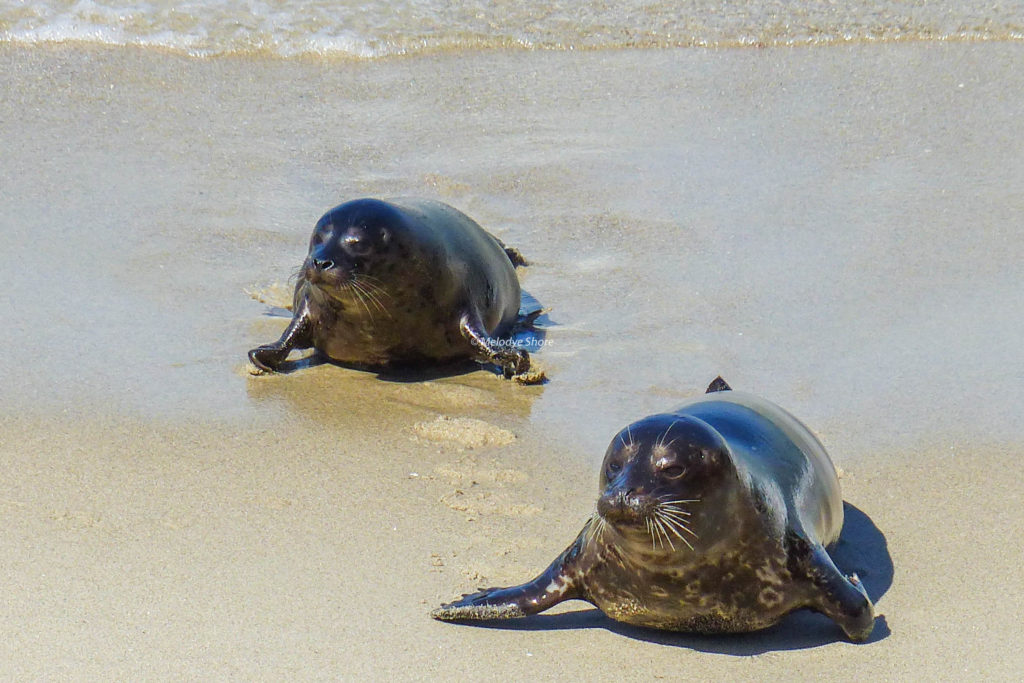 But not everyone sees these changes as a good thing. Locals pinch their noses and point to the mess. No, not the half-eaten sandwiches and disposable diapers, buried in the sand by thoughtless visitors. Seal poop, plopped on the rocks and in the water. “It leaves behind an ungodly stench,” business owners harrumph, especially in the summer.

Fishermen are afraid of losing out to the seals, who forage along this increasingly depleted coastline. 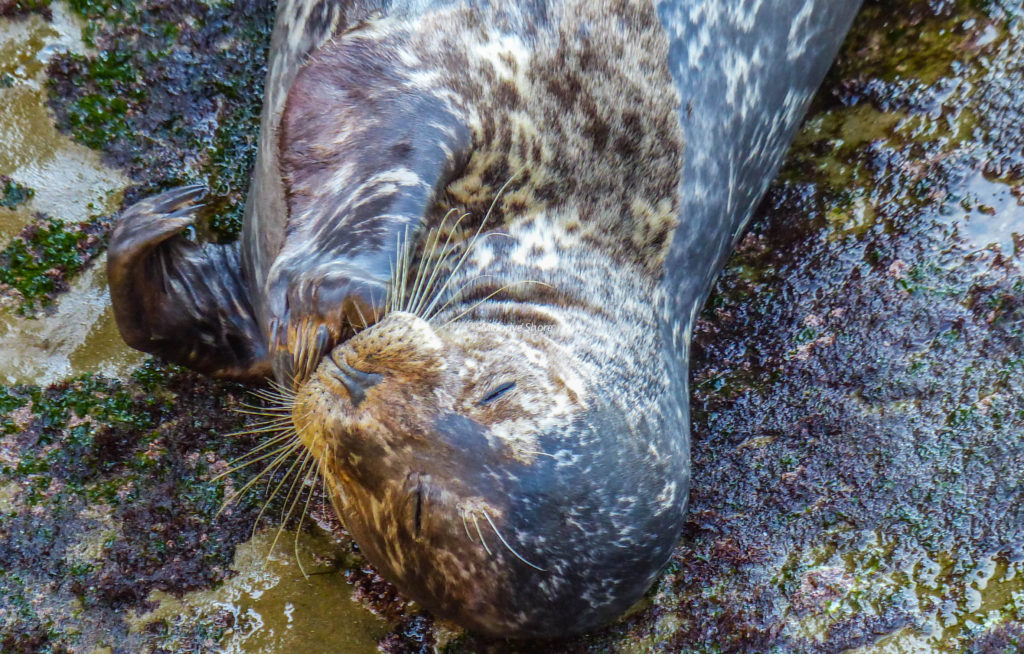 And swimmers complain that they’re coming face-to-muzzle with playful (or unhappy) pinnipeds. In a territorial battle, both parties can be aggressive and unpredictable. 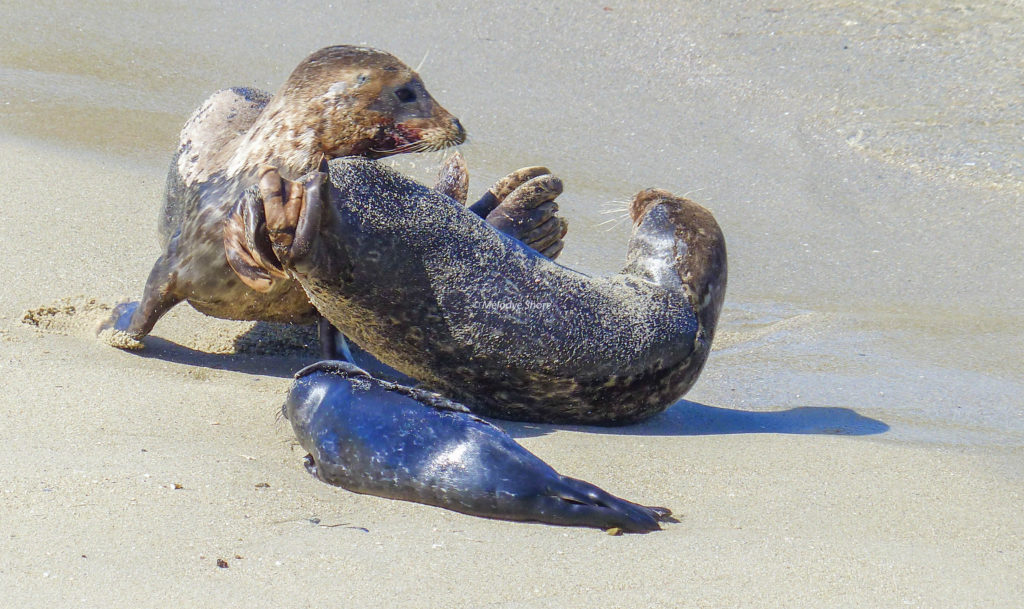 Deep dive: Should the beach be permanently designated as a marine mammal sanctuary, or should it be returned to its pristine (if man-made) state?

The controversy has landed in the courts, many times over. Strongly held views sometimes lead to violent skirmishes. It’s hard to accommodate everyone, but thanks to a recent ordinance, the pocket beach is off-limits to humans from Dec. 15 to May 15 (aka pupping season)–mainly in response to documented cases of seal harassment. 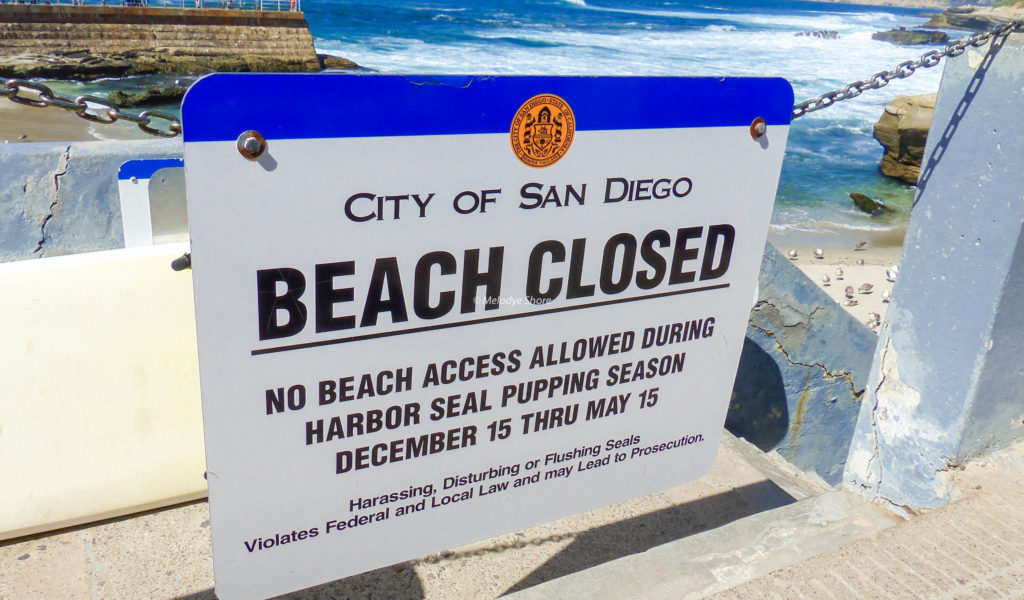 The Coastal Commission sided with city politicians, all of whom were mainly concerned that mama harbor seals might get frightened during pupping season and “flush” (stampede) into the water. Newborn seals get trampled, or separated in the shuffle. There’s perhaps nothing more wrenching than a frantic, hungry baby that’s crying for its mama. 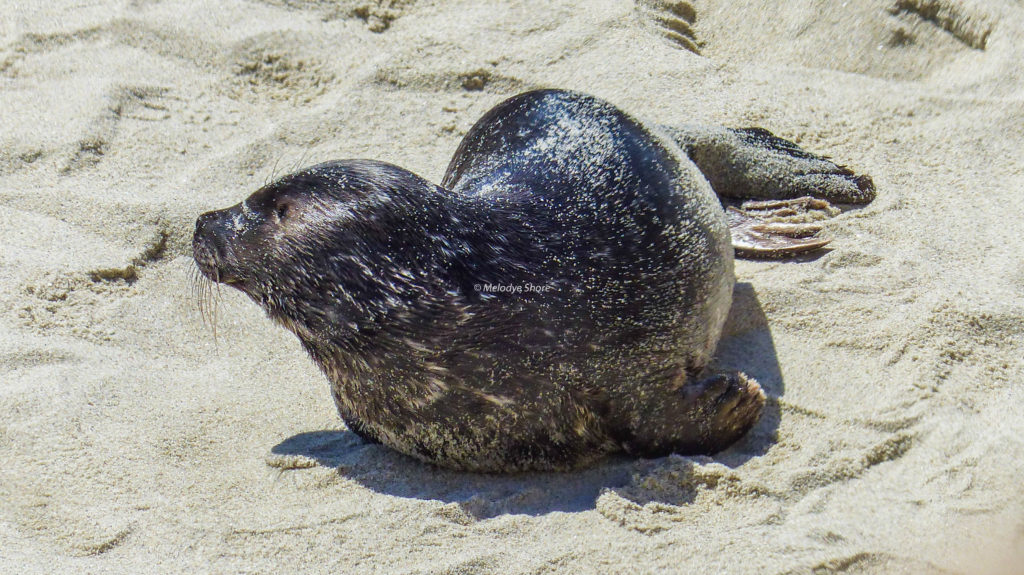 Some people think humans and pinnipeds should be able to interact with one another in peace.  With respect to that viewpoint, the adjacent beach is open to the public, all year long. Since harbor seals also frequent this beach, warning signs are posted at the entrance and on the steps leading down to the water. 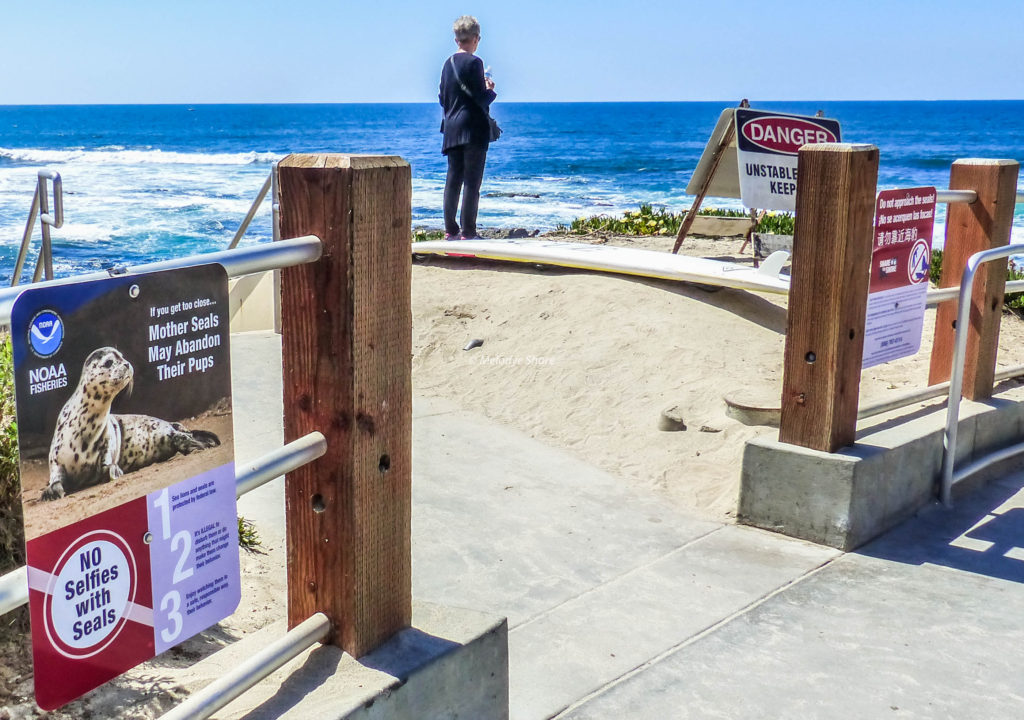 But “shared use” doesn’t mean the same thing to everyone. 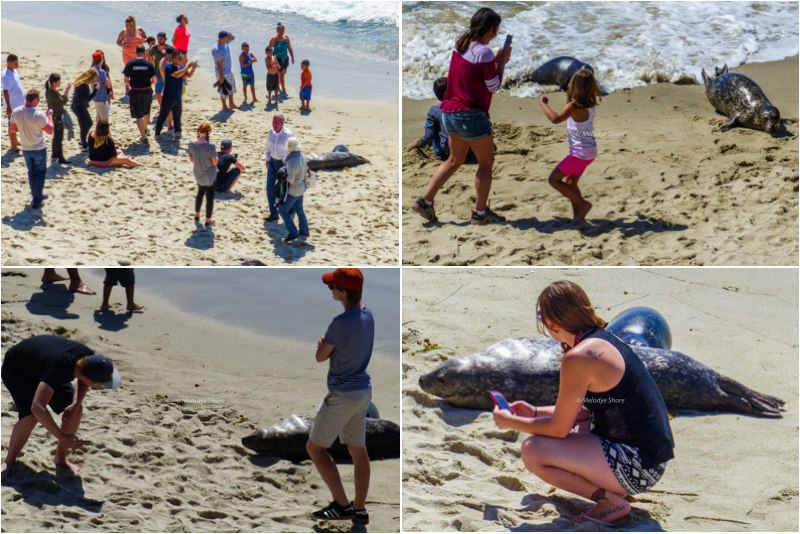 (I’m told that this beach is staffed by park rangers and lifeguards. But I didn’t see anyone patrolling the area.)

Some people would be happier if the harbor seals never set their flippers on Children’s Pool Beach, ever again. But I have a feeling they’re swimming against the tide. 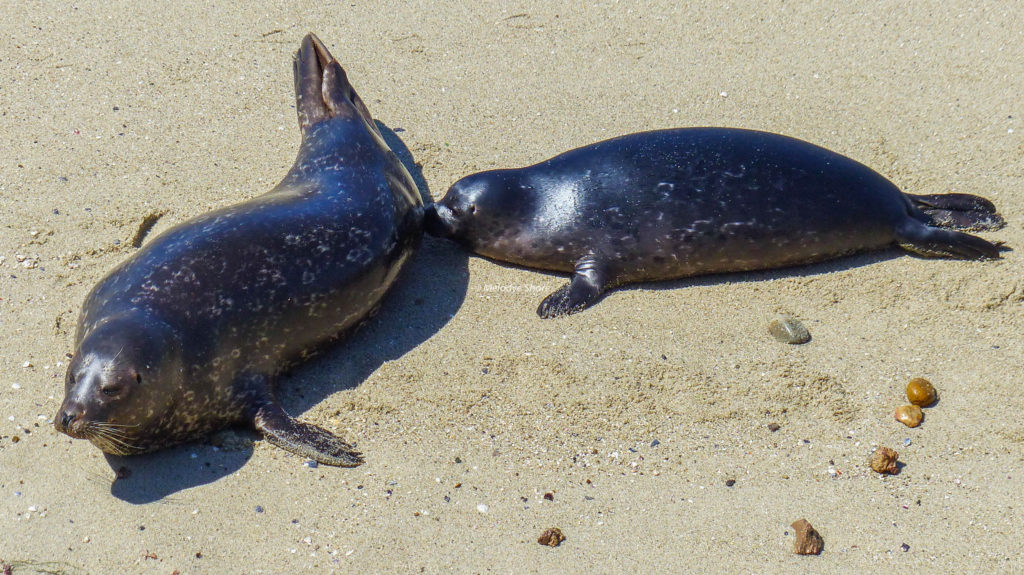 P.S. I took these photographs on the seawall and walkways that surround Children’s Pool, and (where noted) above the adjacent beach. I used a zoom lens, and at no time did I ever venture close to the harbor seals.