We stood at the railing together in reverent silence, watched the sun hover above the chapparel-covered hills before sinking into the ocean. A shoulder’s distance away, a stooped old man was mumbling to himself. He wore a plaid shirt and tan slacks, hitched at the waist with a belt several sizes too large, and his gnarled fingers were folded into a knot of resignation. Or prayer, maybe. It was impossible to read his face because his rheumy eyes were fixed on the horizon, somewhere far beyond the pewter clouds and the sun’s fading brilliance.

In the slope of the old man’s shoulders, I sensed a heavy presence. It hung in the air between us: an unspeakable grief. 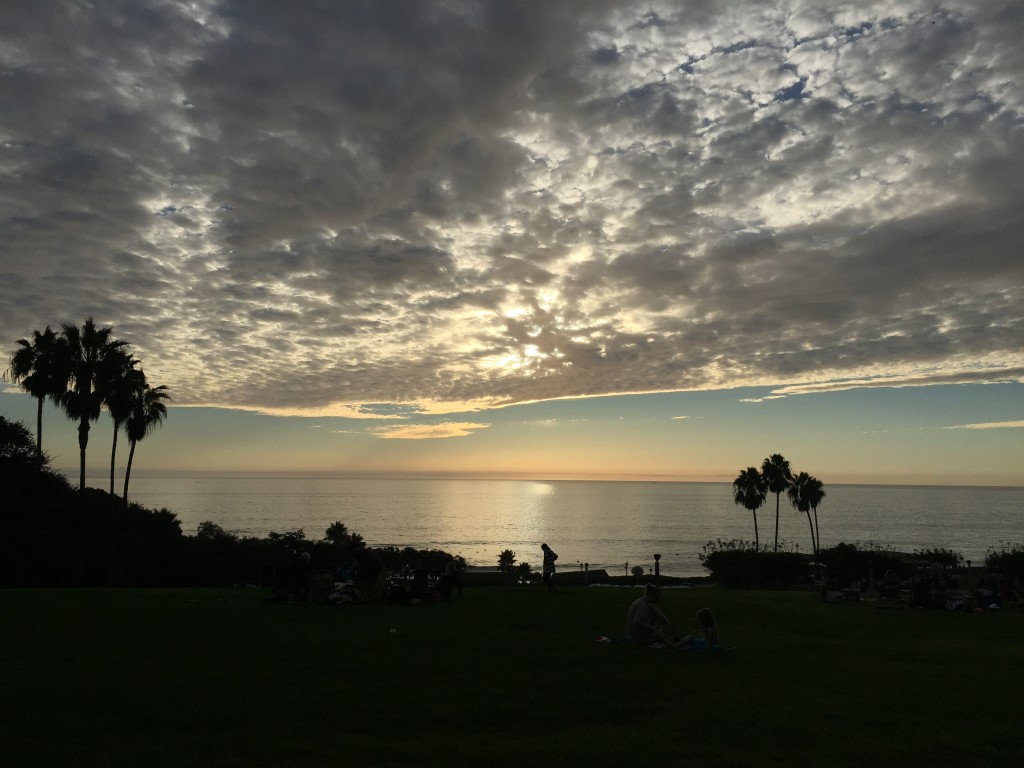 I wanted to lift his spirits somehow, wanted to ask, maybe, if he knew the name of the sweet little bird who sang from the brush as the shadows grew long and the gentle breeze turned chilly. I wanted to bridge the silence, searched without success for the just-right words to cheer him.

The streetlights flickered on, offering light but no insights. Tears welled up in my eyes when we left. In the quiet car ride home, above the sounds of the motor and whirring tires, I grew increasingly uneasy. I placed my hand on my husband’s arm, said “Turn around,” and he responded instantly. In the shared silence, we’d heard (and answered together) the call for grace. We found it in the twilight, but not in the form that we’d imagined. A smallish dog was bounding between a pair of gawkish boys and the lonely old man–a furry bundle of unbridled joy, with flappy ears and a trailing leash. Grace, in the shape of an ungainly mutt, who erased all traces of misery with his swishing tail and exuberant barks.

Grace. It’s the unseen hand that stitches several characters together into a greater story and reminds us of the ties that bind. It’s expressed differently for everyone, perhaps, but it’s very essence of Thanksgiving…a shared table around which we pass generous portions of love and laughter, cherished memories and favorite foods.