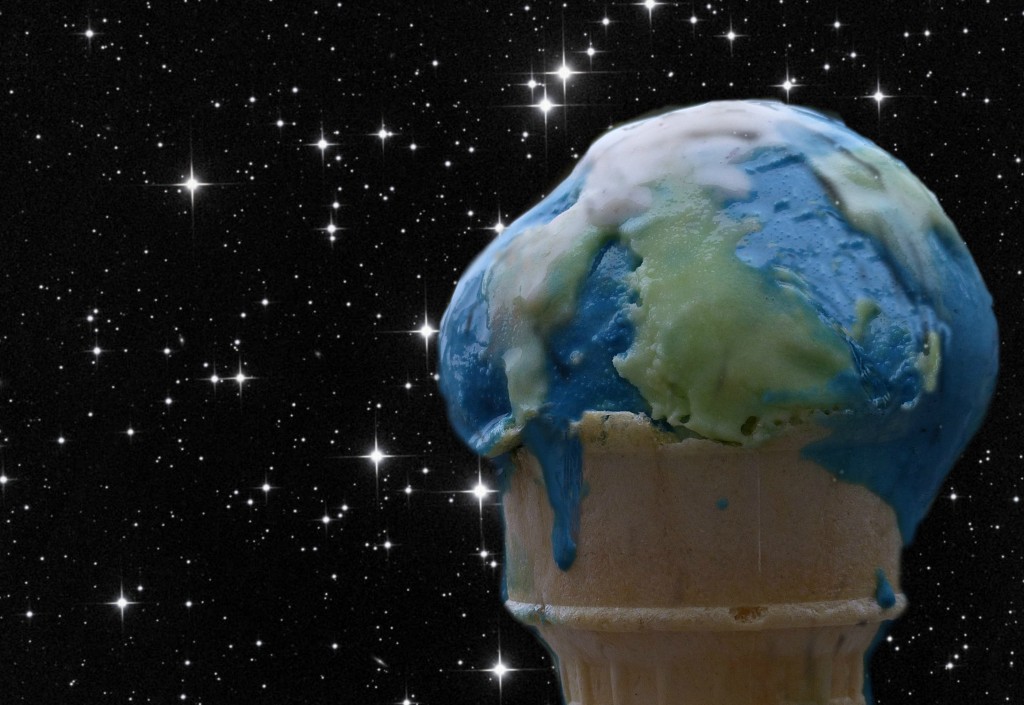 The Earth is not just the environment. The Earth is us. Everything depends on whether we have this insight or not. –Thich Nhat Hanh, Love Letter to the Earth

Day 9 of Susannah Conway’s #AugustBreak2015 photography challenge, and the phrase of the day is Earth. This was my most difficult project so far, because my subject kept melting! I shot this picture outdoors and used PicMonkey to add a starry background (via universe-beauty.com). Whew, it was a whole lotta work, but I sure learned a lot! For that reason alone, I’m happy with the results.

As someone who spent much of her itinerant childhood criss-crossing the country in the back of a family sedan, always searching for that elusive place called 'home,' I was enthralled by the prairie home that author Daisy Hickman describes in ALWAYS RETURNING: The Wisdom of Place.

"To my prairie heart," she writes, "the terrain I grew up with evokes feelings of pure delight. Untouched and free, the prairie symbolizes the great unknown–past, present and future wrapped in one, a convincing space knowing no boundaries or limits, no worries or demons: a place where my heart resides." Hickman could also be describing any number of beloved landscapes, seas, or skies–for that is the home we come to know when we explore our world with hearts and eyes wide open.

You'll find personal ruminations between the covers of this book, as well as inspirational passages from Hickman's favorite transcendentalists, philosophers, and prairie home companions. And perhaps you'll come away, as I did, understanding more deeply the meaning behind the beloved Zen teacher Thích Nhất Hạnh's words: "'I have arrived, I am home' is the shortest Dharma Talk I have ever given," he said. "It means 'I don't want to run anymore.' You need that insight in order to be truly established in the here and now, and to embrace life with all its wonders."

The mind can go in a thousand directions, but on this beautiful path, I walk in peace.”
Thích Nhất Hạnh

The invitation went out on Facebook: A Day of Mindfulness, led by Thích Nhất Hạnh, will take place at the Ocean of Peace Meditation Hall at Deer Park Monastery in Escondido, California. I wasn’t feeling well, and my to-do list was long. But these kinds of opportunities don’t present themselves every day, so I cleared my calendar, downed some Tylenol and hit the road.

An early-bird by nature, I didn’t mind that I had to leave the house long before sunrise. I breathed deep the welcome silence, inhaled the salty mist along the Pacific Ocean until the GPS told me to turn inland. Black Tesla in my headlights, a rusted VW bus at my back bumper…I found myself in the midst of a miles-long caravan that inched its way up the narrow, steep road to the monastery.

I felt at ease among this diverse group of travelers: roughly 1400 smiling individuals, dressed in everything from yoga pants to monks’ robes, frayed cargo shorts to haute couture dresses. We sat elbow-to-elbow on folding chairs, knee-to-knee on meditation cushions. Latecomers huddled in the doorways or settled into the spillover areas that circled the rounded stucco building. The excitement was palpable, and multilingual. Headsets were made available for those who needed interpreters.

A gong sounded, and a hush fell over the crowd. A middle-aged monastic swept into the meditation hall, brown robes swishing as he walked. Young Brother—a reformed Catholic priest, formerly known as Father—led us through a sequence of acappella songs. Simple choruses with a shared message: mindfulness in every moment, precious gifts in every breath.

(I don’t have an actual transcript, so this next part is based on detailed notes and my best recollections.)
“Now that we’re all here,” said Little Brother, “we will walk together, up the hill. No talking, no thinking. Just breathing. Notice the flowers, the blue skies, the birds in flight. Enjoy the silence. Consider each step a gentle kiss for Mother Earth–an expression of gratitude for her gifts. Share this joyful experience with the animals and plants, and with each other. In…out…deep…slow. Breathe in the joy that comes of mindfulness.”

We hiked a dusty path together, following his instructions (to varying degrees) for about 45 minutes. Hipsters loped up the hill together, scrolling through text messages and snapping selfies. A grizzled couple veered from the trail, high-powered binoculars locked on a red-tail hawk that soared through the canyon. A toddler tugged on his mommy’s sleeve, just ahead of me. “Look, a lizard!” he squealed, oblivious to the yogini-Rastafarian-monk-absentminded professor pileup-in-progress right behind him.  Me, I stayed in the moment as best I could, but I confess: my shoulders were quaking with surpressed giggles. And yes, I did stop now and again, to take in the view and snap some photos.

Just beyond the chalk-white Buddha statue—where the ground leveled out and the morning sun was slanted just so—I finally caught my first glimpse of Thích Nhất Hạnh. He was sitting cross-legged in the dust, wizened face haloed by a simple bamboo hat. Was he looking inward, or into the distance?  I couldn’t tell.

Thích Nhất Hạnh. Zen Buddhist monk, prolific writer, social activist, a Nobel Peace Prize nominee who was exiled from his native Vietnam for more than 40 years. Martin Luther King Jr. called him “an apostle of peace and nonviolence.” His students call him “Thây,” the Vietnamese word for teacher.
He sat motionless for several long minutes, flanked on all sides by monastics in identical brown robes. I stood off to the side and behind the assembled crowd…sort of, sometimes. I snapped a few photos, jotted notes into my journal. Random thoughts popped into my head: Wonder how long we’re going to stand here, baking in this heat? Sheesh, that winged insect sure is pesky! Oh hey, is that a security guard, hovering over Thích Nhất Hạnh? Sweat beads rolled down my cheeks and pooled at my collar–partly because of the blazing hot sun, but mostly due to a persistent fever. Fever, chills, fever, chills; jacket off, jacket on. Again and again, I had to call myself back to mindfulness, because yes, I’m human like that.

Slowly, methodically…Thích brought his palms together at the center of his chest, bowed to the singing bowl in front of him, and then raised it to the level of his heart. After a brief pause, he tapped the bowl with a mallet, thus inviting it to sing. And when the last notes echoed over the canyon, he clasped hands with two children, and led us back down the hill. Breathing in…breathing out…feet of clay in dusty brown clogs, mindful of every step.

We rearranged ourselves in the meditation hall, so as to better accommodate the influx of newcomers. Thích sat cross-legged on a cushion at the altar, with a bemused smile on his face. A devotee fell to his knees in the doorway, prayerful hands extended toward his teacher, forehead kissing the wooden floor. Friends stepped over his prostrate form, fingering mala beads and chanting.Thích took a slow sip of water, and thus began his Dharma talk:Breathing in, I calm my body. Breathing out, I smile. Breathing in, we invite our ancestors to enjoy breathing with us. We inhale together, oxygen and thoughts. Our ancestors dwell in every cell of our bodies, and they enjoy breathing in with us. Together, we enjoy the exhale. Our smiles show the world that we are free spirits within our bodies.”
“We are in the habit of running,” he said, “running away from the moments that are brought to us by our ancestors. We are afraid of going home to ourselves and to the suffering. But you don’t need to run anymore. You’ve been running all your life. Walk instead like the Buddha, enjoying every step. Every step brings us home to the here and now; every step is healing. No matter how short or long the distance, you nourish yourself with every step. Stop thinking. Breathe and enjoy. Walk like a free person. Release all expectations. Touch Mother Earth…let her nurture you. Let her teach you to walk in joy.

The conversation turned serious, if only for a moment. “Be mindful of your sensory consumption,” Thích warned. “Everything is so accessible these days, but the messages are oftentimes toxic. This leads us to a state of anxiousness, fear and despair. Even with so many electronic devices, communication is more difficult now than ever before.”From deep in the bowels of a woman’s purse, a ringtone sounded. Her cell phone vibrated again and again, until the woman finally stepped outside to take the call. Thích’s eyes crinkled, and the corners of his mouth lifted–a smiling acknowledgment of this teachable moment.

Thích‘s Dharma Talk lasted roughly 90 minutes—a quiet unfurling of loosely stitched thoughts. He spoke quietly, in measured tones. Although their Buddhism-inspired messages are very similar, I’d say his speaking style is more subdued than that of the Dalai Lama, whom I especially appreciated for his burbling exuberance. He wasn’t judgmental; nothing he said was prescriptive. Just a kindly man, offering seeds of wisdom. I couldn’t help notice, however, that a handful of people took it upon themselves to stare pointedly at anything that violated their own, unspoken rules: whispered conversations, for instance, and restless children. At some point, the prostrate man rolled onto his side, fast asleep, and started snoring. Breathing in the humor…erupting in laughter. I stifled those giggles again, dodged the dagger eyes they aimed at both of us.
During a lull in the conversation, I leaned toward the woman next to me and asked if she perhaps had a couple of Tylenol.  “Can’t seem to shake this fever,” I joked, “even with all this meditative breathing.” Well now! You would’ve thought I’d asked a vegan for a Big Mac. “Maybe,” she snapped, “you aren’t trying hard enough.”

“Suffering is the first awareness, Thích continued, “the first Noble Truth. The noblest aspiration is to help people to suffer less. Some of us do not know how to handle pain, and so we have a tendency to run away from ourselves and seek forgetfulness. [But] when we return to ourselves and recognize our own suffering, we can more easily understand the suffering in others. When that happens, it is very easy to feel compassion, and to help people come home to themselves.”

Home. This seems to me a good place at which to end this post. No, I didn’t summarize all the ideas that Thích shared with us that morning. Even if I had the transcripts at my elbow, I don’t think I could give them their due justice. Too, there was more to the group dynamics than I was able to see through my own, limited lens. But these are the memories that carry me back to that Day of Mindfulness at Deer Park Monastery. Memories of my arrival, of my homecoming. Breathing in those moments as I write this; smiling even now.

1. Gardens are a form of autobiography.  ~Sydney Eddison

2. Everything changes once we identify with the witness to the story, instead of the actor in it. ~Ram Dass

4. At any given moment, you have the power to say: This is not how the story is going to end. ~Anonymous

5. And now the page beckons.
Thin as the layer of silver that makes the mirror reflect, it urges, Set down here what you saw, and you will understand it as never before.
And so will all the world.  ~Bonnie Friedman, WRITING PAST DARK