I participated in a counter-protest for a Ku Klux Klan rally at Pearson Park last weekend, just a few miles from The Happiest Place on Earth. I’d come to help eradicate racism at its roots, armed only with a camera and a hand-lettered protest sign. 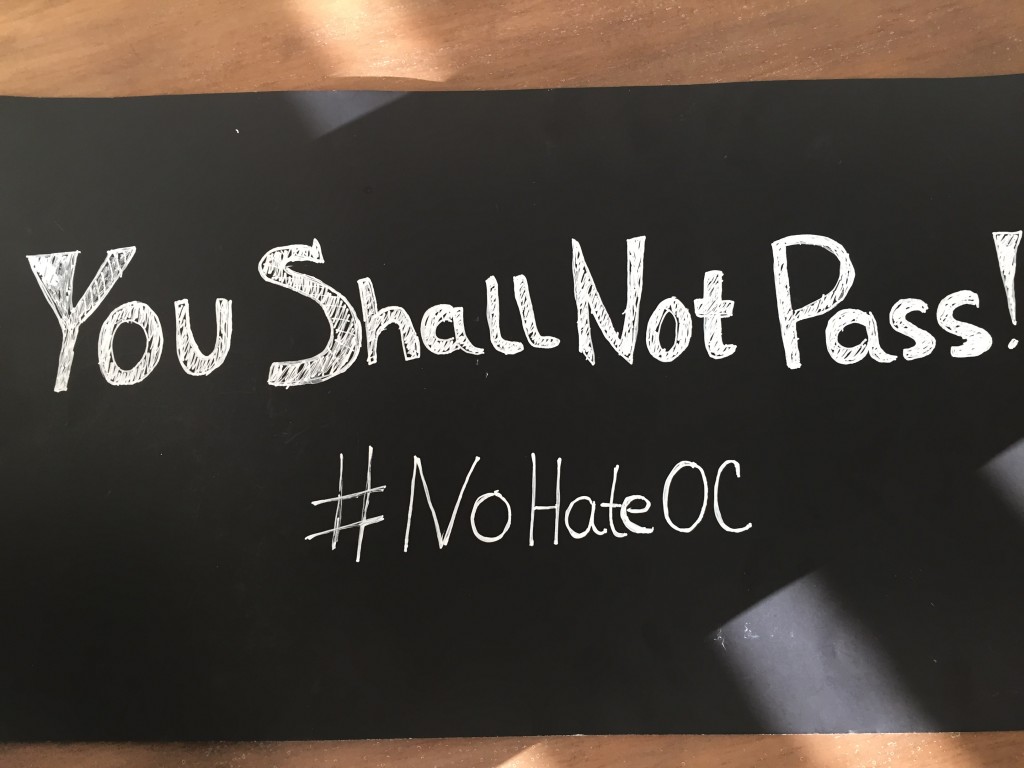 Inspired by Gandalf, the great wizard in Lord of the Rings.

Some reports said the KKK had scheduled their permitted march for 10:00 a.m. The Anaheim police, however, said the rally was scheduled for 1:30.

The counter-protest was equally confusing. Someone suggested we’d be gathering on the corner of Harbor and Sycamore at 9 a.m., but that area was already occupied by Jehovah’s Witnesses.  A nearby display table was blanketed with Watchtowers, free for the taking.

A stone’s throw away, a cluster of men slouched across metal benches, wooden crosses standing sentry as a street preacher read admonitions to them from his Bible. Under the pavilion, his wife spooned shredded meat into bowls; but when counter-protesters wandered into their encampment, she smiled but told them firmly that the food was “just for the men.” 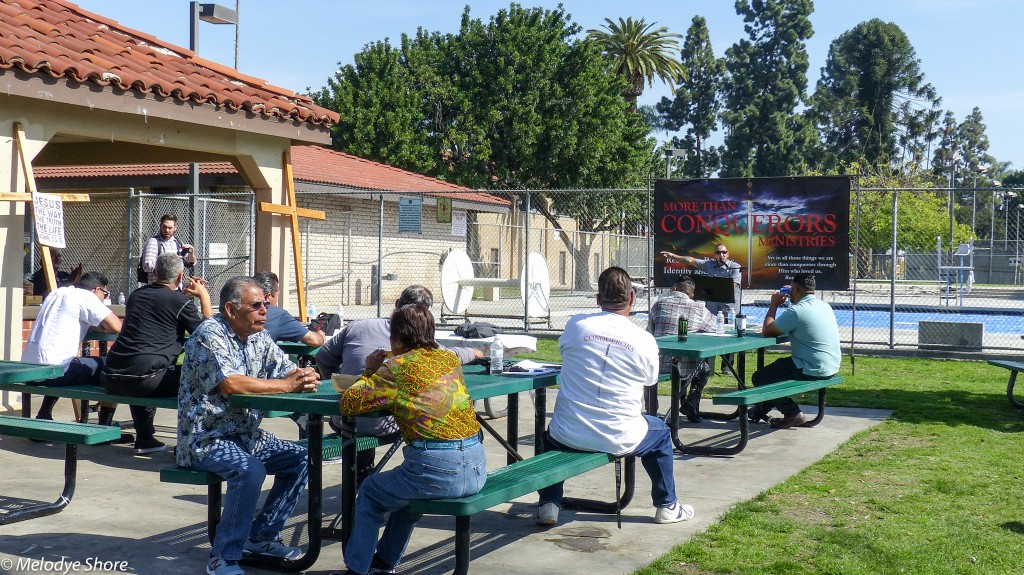 At long last, I spotted our group. Multi-ethnic and cross-generational, we  stood in a loose-knit circle around a picnic table, scrawling slogans on tag board as we shared condensed versions of our life stories. Olivia, the unofficial, one-woman welcome committee, wore a rainbow flag like a shawl. “I’ve done all the things,” she told us, “incarceration, rehab, you name it.” Now, however, she spends her off-hours tending to the needs of the homeless in the north Orange County area, and shielding the most vulnerable from harassment. “I show up for them,” she said, “because I want to make our community a safe haven for everyone.”

Martin scanned the park’s perimeter as he talked about the punk rock concerts he orchestrated, in order to feed and buy clothes for disadvantaged children in his neighborhood. “This is our home,” he said. “We’ve gotta look out for each other, you know?” 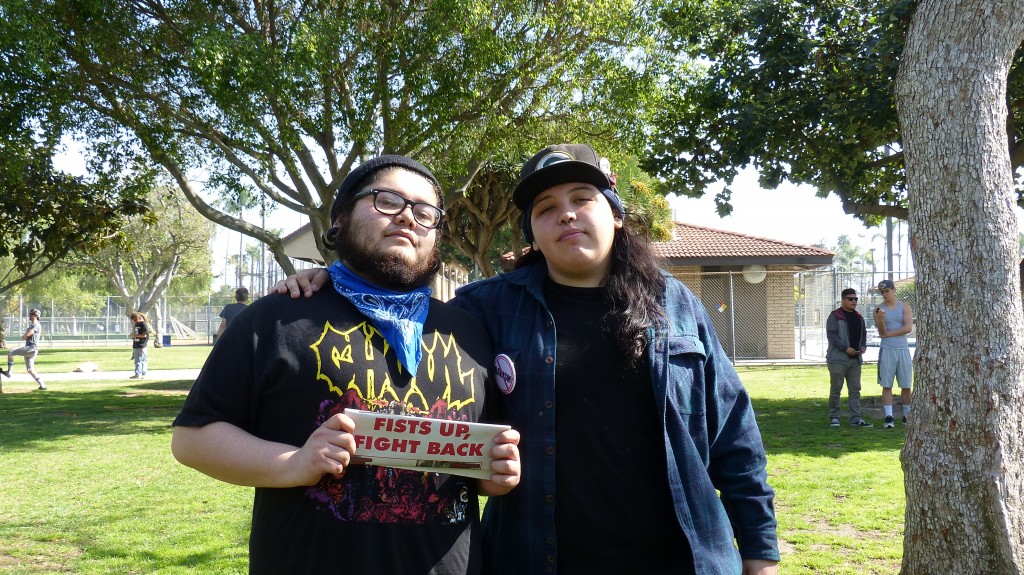 I’d come to Anaheim that day to confront racism–to link arms with people like Martin and Olivia–good souls who’ve watched it slither through their neighborhoods, who see Donald Trump’s threats as very real, and who worry that their voices are being muted. Those were the words that I carried in my heart to Pearson Park, but they seemed too highbrow for our first meeting. So I told them instead that while I live at a distance, I want to join ranks with them against racism.

“There you go,” Olivia said, “Community means everybody.”

But as it turned out, “community” is a fractured concept when it comes to this kind of battle.  I witnessed an outpouring of generosity from unexpected quarters, but I also experienced deafening silence on the part of those whose microphones have the broadest reach. Violence, too, brought about by self-proclaimed peacekeepers. And as for the police officers–whose primary job is to remain vigilant in its protection of citizens, all of them equally–they didn’t show up at all, until it was almost too late.

As soon as the news broke about the planned KKK rally, I’d contacted every candidate for political office in California District 46 (Anaheim/Santa Ana), including Congresswoman Loretta Sanchez, who is currently running for U.S. Senate. In my emails, website contacts, and tweets, I linked the OC Weekly story that first brought the KKK rally to my attention and asked each candidate if they planned to speak or otherwise respond to community concerns. 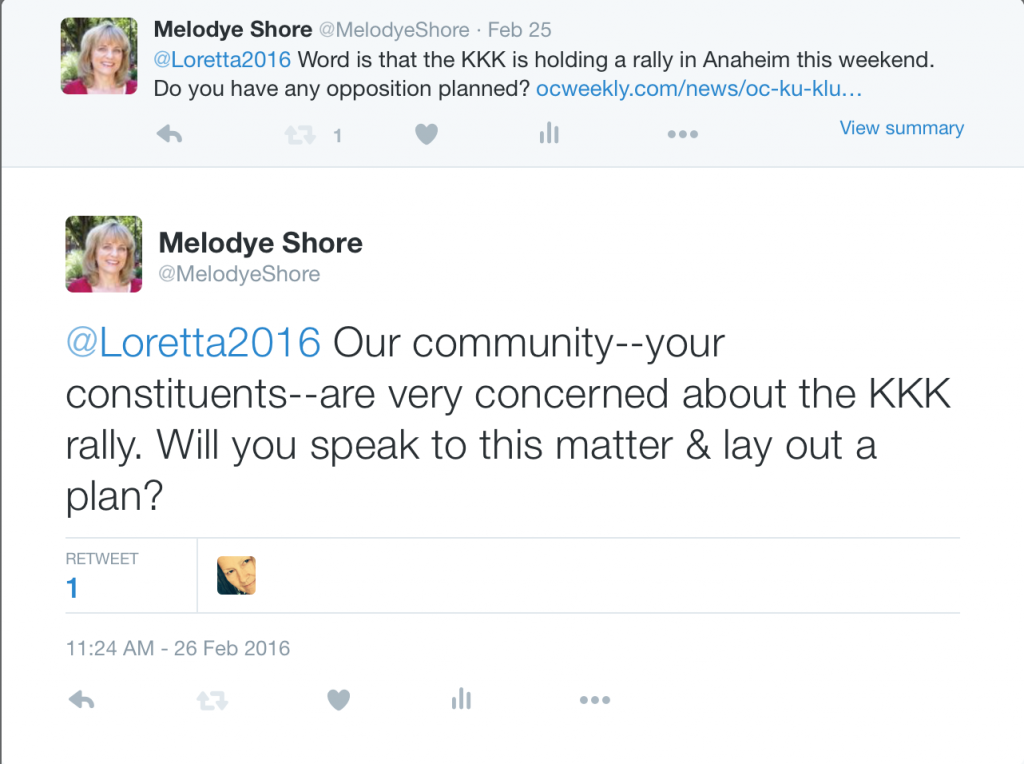 Who knows? Maybe every tweet, email and website message–theirs and mine–got lost in the ether. All I know for sure is that my queries went unanswered.

“I’m not surprised,” said the guy wearing dreads and an InLeague Press t-shirt. “There aren’t any cops here, either.”

He floated a theory: Perhaps the conflicting timelines for the KKK rally were intentional. (See OC Weekly update, here). Maybe the police wanted to dissuade people from also participating in a commemorative march for Ernesto Canepa, an unarmed citizen who was gunned down by a Santa Ana policeman in early 2015. The accused officer was quietly absolved of any charges this past January, and no surprise, the community was angry.  “I mean, just think about it,” he said, before he wandered off to join another group. 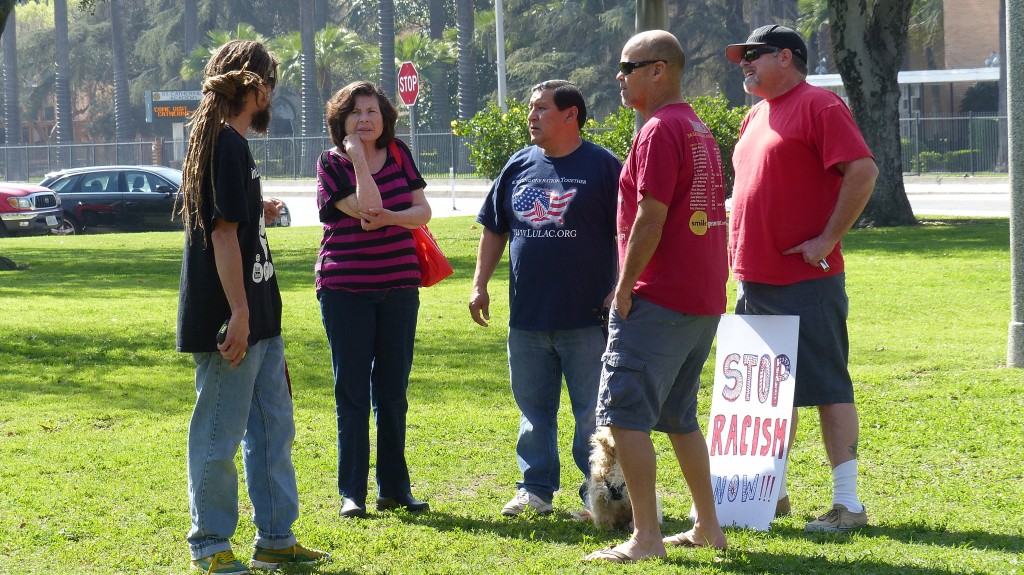 However sketchy the timeline, my best guess is that 75-100 counter-protesters had assembled in the park before lunchtime. The Jehovah’s Witnesses had long since scattered, but the street preacher was heading into overtime. If civic leaders and political candidates were in attendance, they were watching from the margins, blanketed by invisibility cloaks.

It was around 12:30 when the event organizers set up a portable mic. We stood in loose-knit clusters of presumed solidarity. A disembodied voice blasted a call-and-response very similar to this through the loudspeaker:

Any KKK members in our midst?

“No!” The counter-protesters answered.

Well good, because if you’re hiding among us, you’re a chickenshit.

I glanced at my friend Cathy in horror. “That was really, really bad,” I whispered, but when she tried to respond in kind, her voice was muffled by cheering. 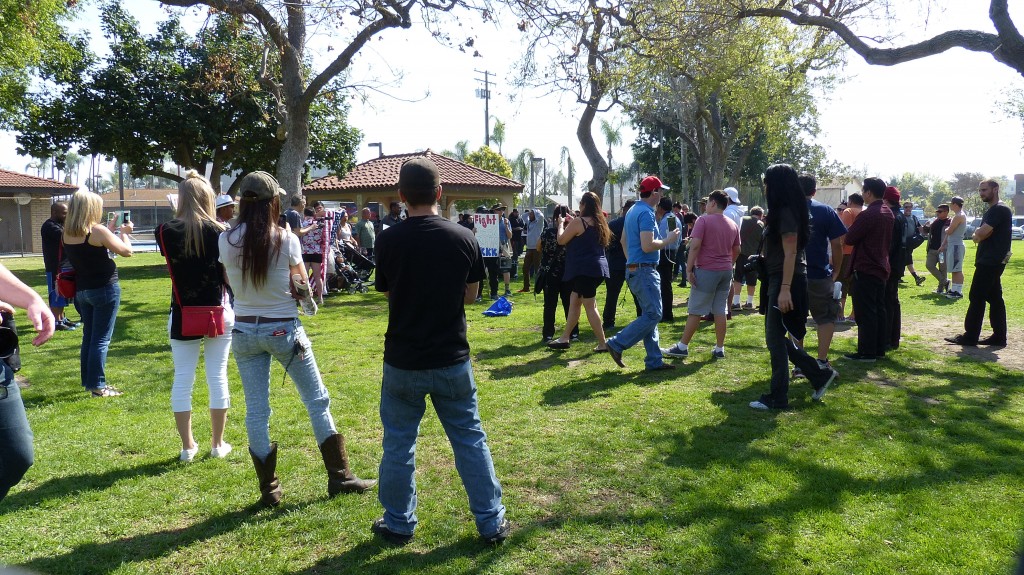 At some point, someone held a cardboard sign aloft and pivoted. I zoomed my lens in his direction. There it was: naked hatred, sketched with a Magic Marker: 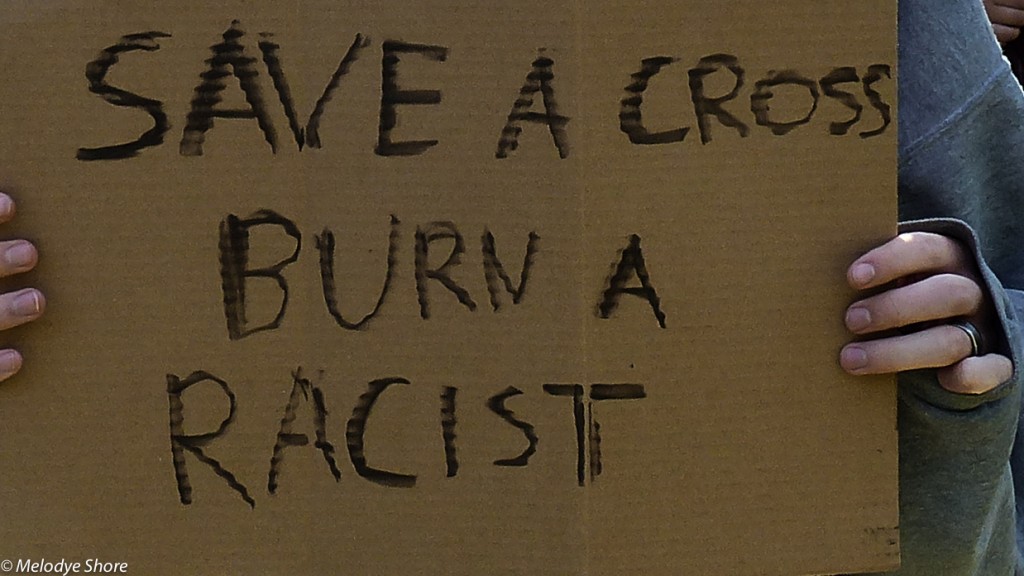 Benny Diaz (President of LULAC-OC) hurried to the microphone. Worry etched into his face, he invoked MLK’s memory and pleaded the case for nonviolent activism.  But by that point, the brewing conflict was stirred and frothed to the point where anger was boiling over.

The larger crowd drifted into smaller, more peaceful alliances: hungry, thirsty, and sweat-soaked; brimming with the optimism that’s born of shared causes, accompanied by an undertow of dread. 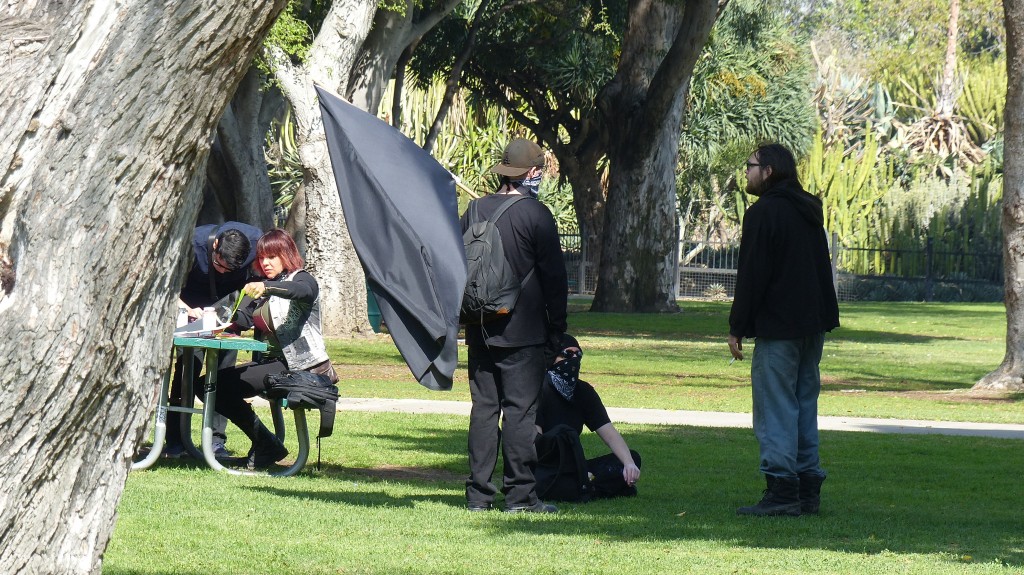 Cathy and I staked out an empty picnic table and talked quietly among ourselves. Self-appointed vanguards kept watch. If you judged by appearances only, you’d be hard-pressed to tell malignant forces from good. 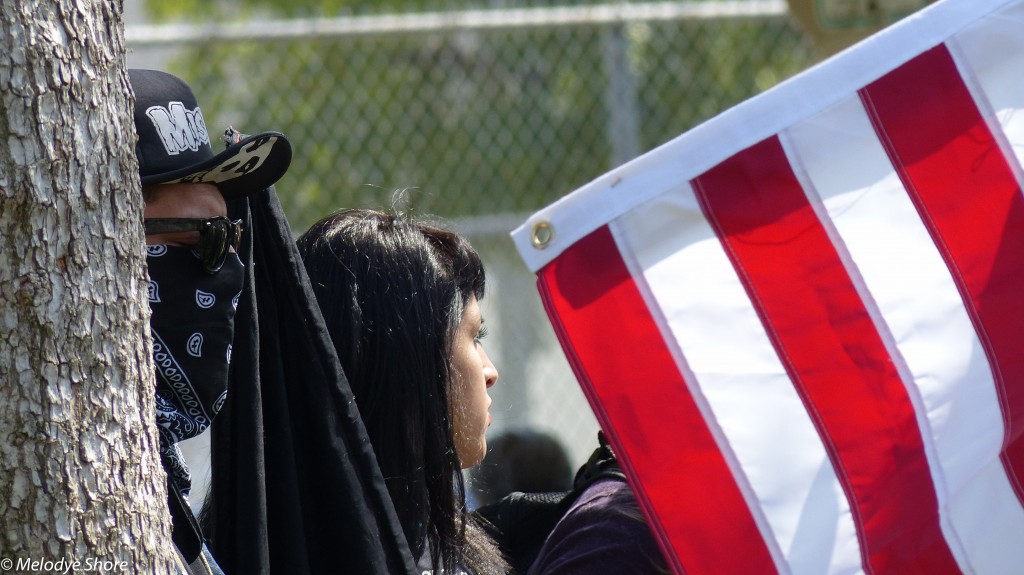 The street preacher, finished by now with his stemwinder, wandered through the park with a mostly empty box of fundraising chocolates.

“The almond bars are gone, but I still have dark chocolate, crispy milk chocolate…”

Just then, a glossy black SUV rounded the corner at Harbor Blvd. As it crawled up Cypress, wary vigilance transformed itself into a kinetic frenzy, and dozens of counter-protesters flooded into the street, pounding on the windshield and obstructing its path. “Come into the park,” they taunted.

In a blur of black shirts, accessorized with KKK-related patches, members of the Klan erupted from the SUV.  When they tugged “White Lives Matter” placards and Confederate flags from the back, the counter-protesters pounced. If they had weapons, I didn’t see them, but someone used a flagpole as a spear.

The counter-protesters, on the other hand, wore no uniforms; nor did they share similar philosophies about peaceful protests. Some watched from a “safe” distance, tagboard signs overhead. Still others jumped right into the fray, pummeling the Klan, faces shielded by masks and bandanas.

While unsung heroes tried desperately to keep both the KKK and counter-protesters at bay, bystanders captured the moment with their cell phones. 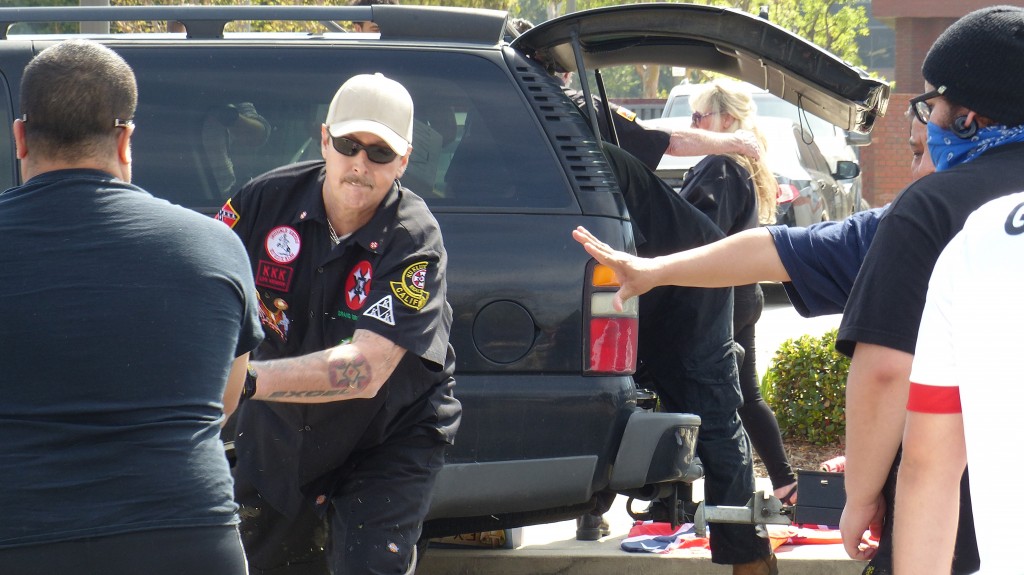 My hands were trembling, but I was there to bear witness. I kept walking toward the action, kept pressing the shutter button.

Anaheim police officers, however, didn’t make their presence known until a Confederate flag was ditched at the curb, the SUV had sped away, and a stabbing victim was writhing in a spreading pool of blood. 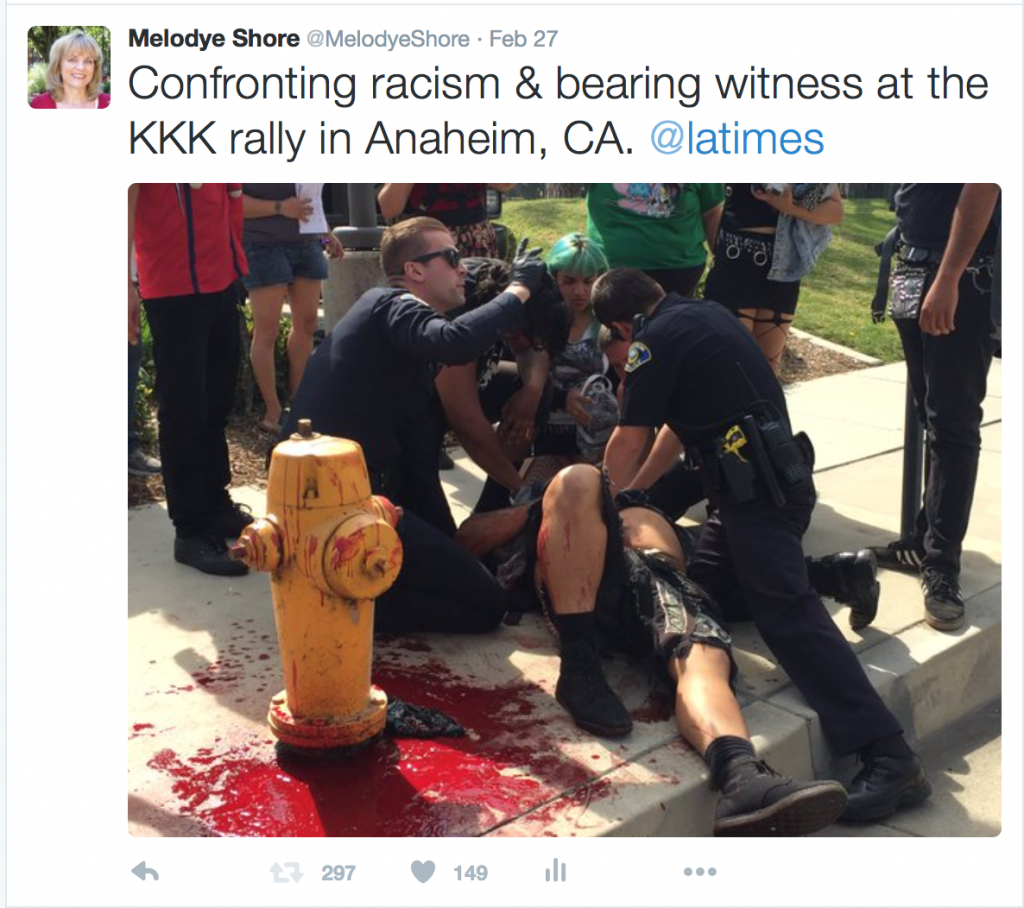 While eyewitness accounts are typically unreliable (and wildly divergent), cameras don’t lie. “I have photographs,” I said to Sergeant Wyatt when the Anaheim police finally arrived on scene. He handed me his card and moved down the street, where wounded counter-protesters were being treated by paramedics and KKK members were being detained for questioning. 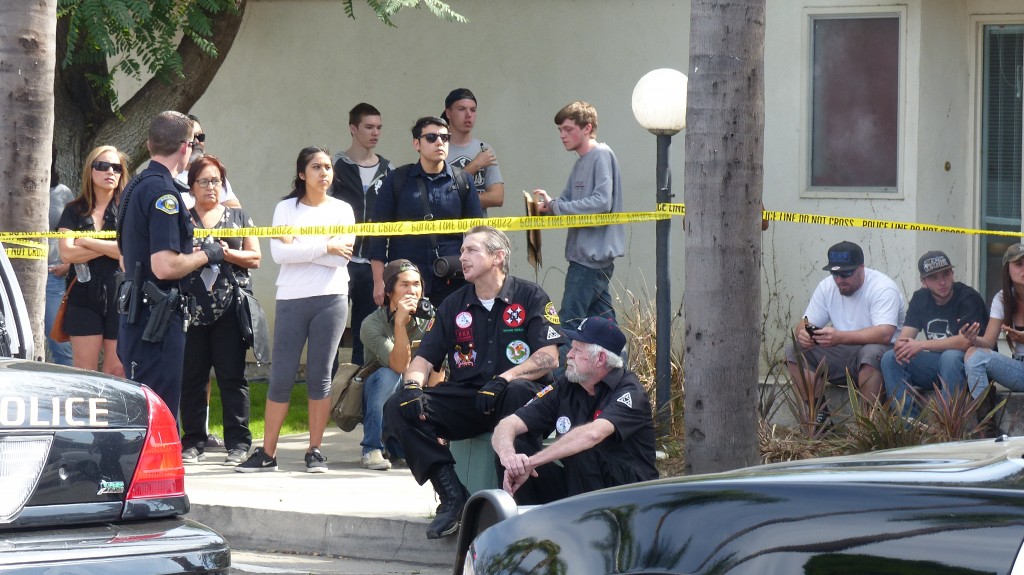 Cypress Street was emptied, save for a handful of gawkers and a smattering of counter-protesters. As Cathy and I made our way back to the grassy park, I spied a baseball cap with blood inside the rim. I tucked it behind my protest sign, safe from prying eyes, and signaled to the cops who straddled the yellow line. 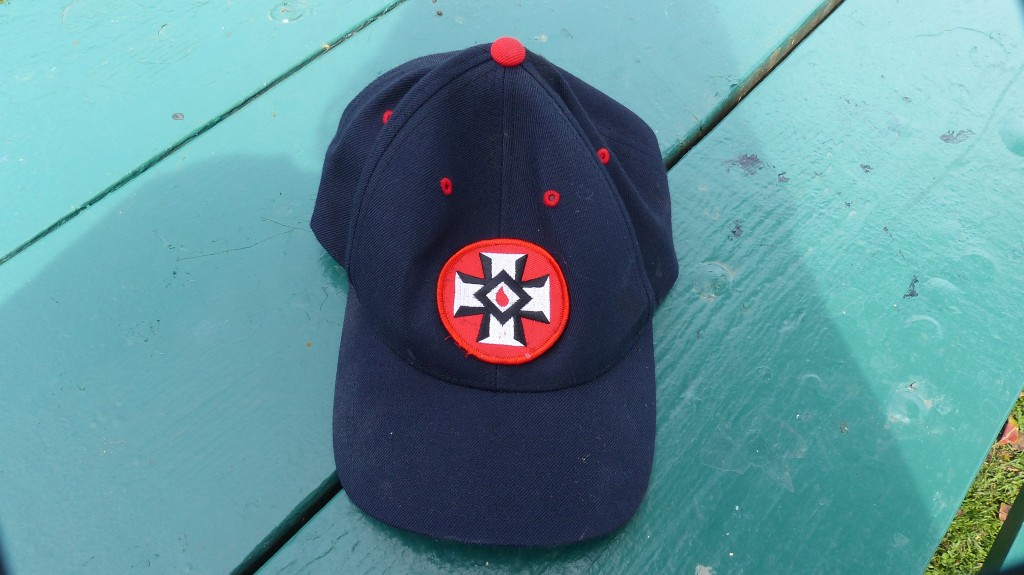 “I found something that might be important,” I said when an officer sauntered over. He barely glanced at the cap, stifled a yawn. I couldn’t see behind his aviator glasses, but I felt certain that he was staring past me when I talked. When pressed, he jotted down my contact information and asked me a few questions.  He didn’t write anything down. He told me he had a good memory, though, and pointed to the personal camera on his chest. When he looked away, I snapped his picture. 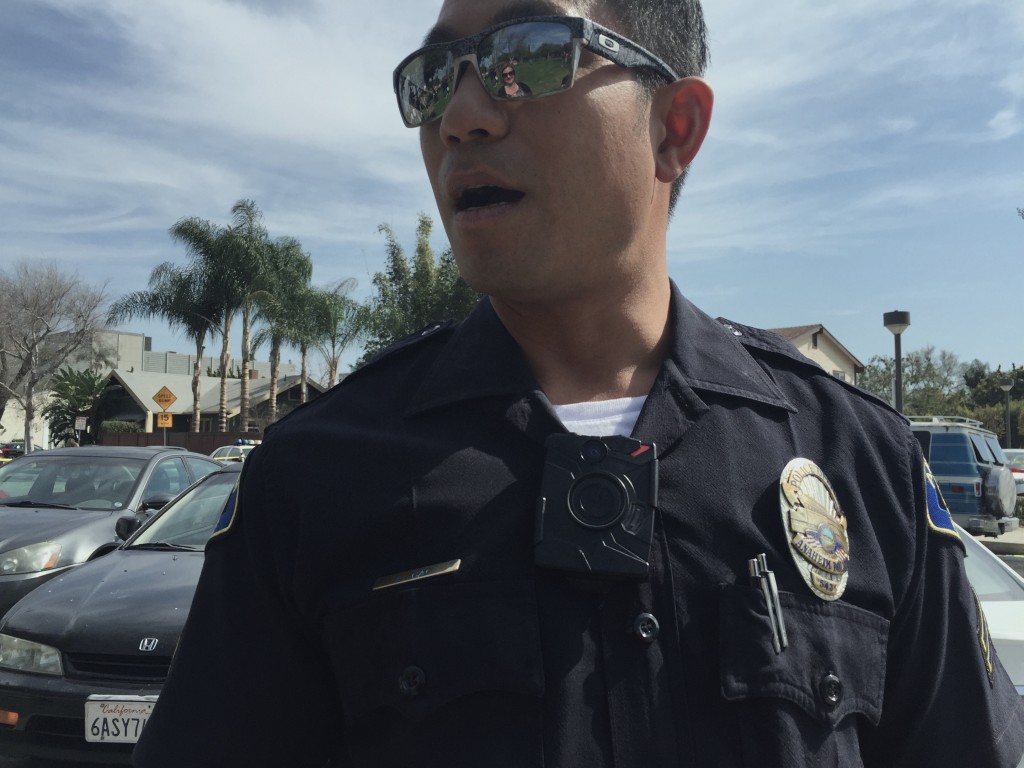 By that point, the elusive SUV was being searched on a side street, my camera battery was almost out of juice, and the untouched chocolate bars were melting into the bottom of my bag. I was heartsick, and more than ready to leave. 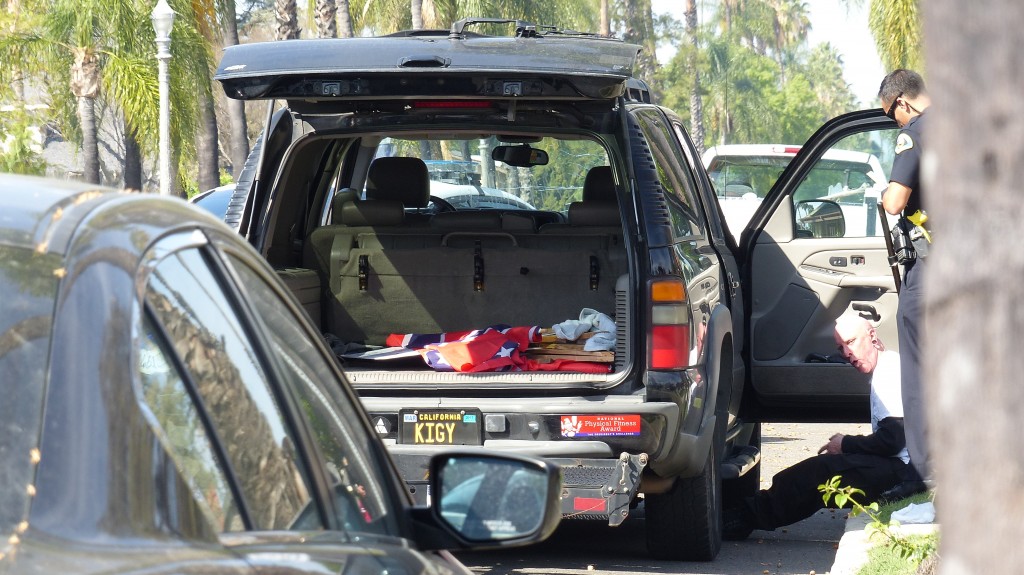 Community activism has its place, but this had gone horribly awry. I wanted to watch the sunset with my husband, and to see “our” hummingbird tucked safely in her nest, iridescent feathers gleaming in the evening’s last light. I needed to find peace within my own garden.

Even so, I managed a wan smile for the grizzled old man in the leather vest and bandana headband–the counter-protester who shuffled past me in a daze, muttering to no one in particular, “It wasn’t supposed to happen this way.”