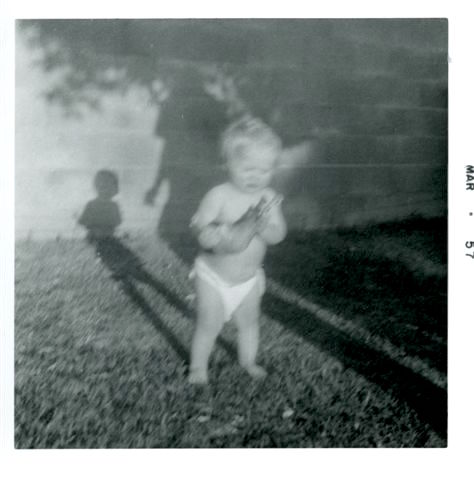 I know very little about this candid snapshot. Someone scrawled my name on the back, so I’m assuming it’s me. But it’s one of those pictures that raises more questions than it answers.

There’s a date stamp on the white border, which suggests the film roll was commercially developed. I hadn’t yet celebrated my first birthday, so what was the occasion? And whose shadow is that, hovering protectively over mine?  Lost in the moment…so me.  Probably concentrating on some newfound treasure, but I don’t know that for sure.

It’s not a keeper, in the traditional sense. But to me, it’s priceless, because it’s one of a handful of pictures that survived my itinerant childhood. And even in its blurry state, it manages to tell a story. My story. Here, the muted daughter of a fire-and-brimstone, fundamentalist preacher, who eventually found her own voice. Born into a cult-ish family, she eventually came into her own.

In this grainy, black-and-white photograph, I see also the broader picture. People don’t live forever. Snapshots fade, and memories gets swept into the dustbin of history. So don’t let your stories languish in a junk drawer (on a cell phone, a hard drive…). They belong to the collective, where they can be savored and shared.