I came upon this plen aire painting class on my walk yesterday. Beautiful morning; magnificent view. 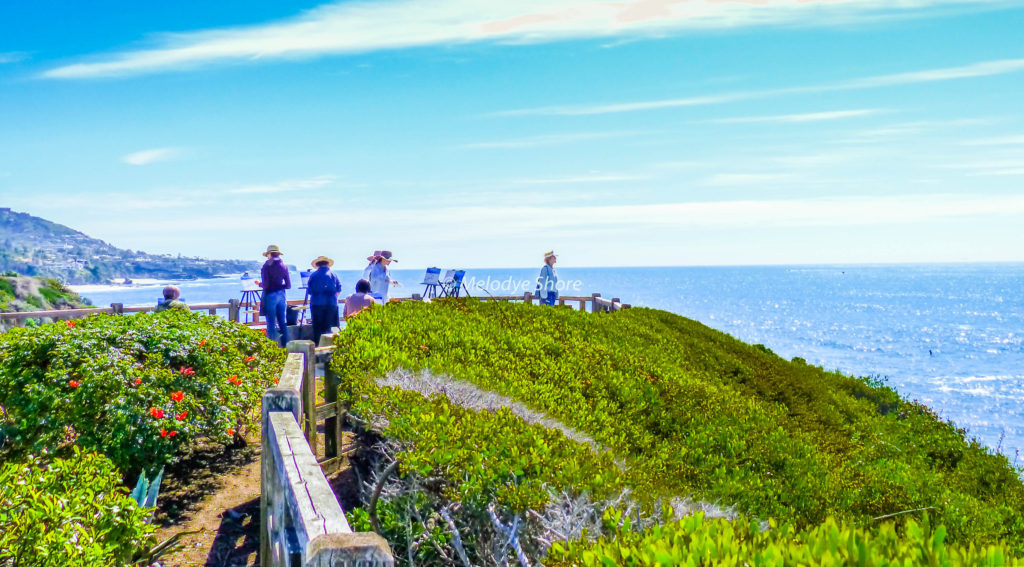 I watched from a respectful distance, noting with interest that the artists worked systematically, dabbing identical brushes into matching color palettes. When they’d spread the first pigment from corner to corner, they stopped to compare their templated images to the scene beyond their easels. 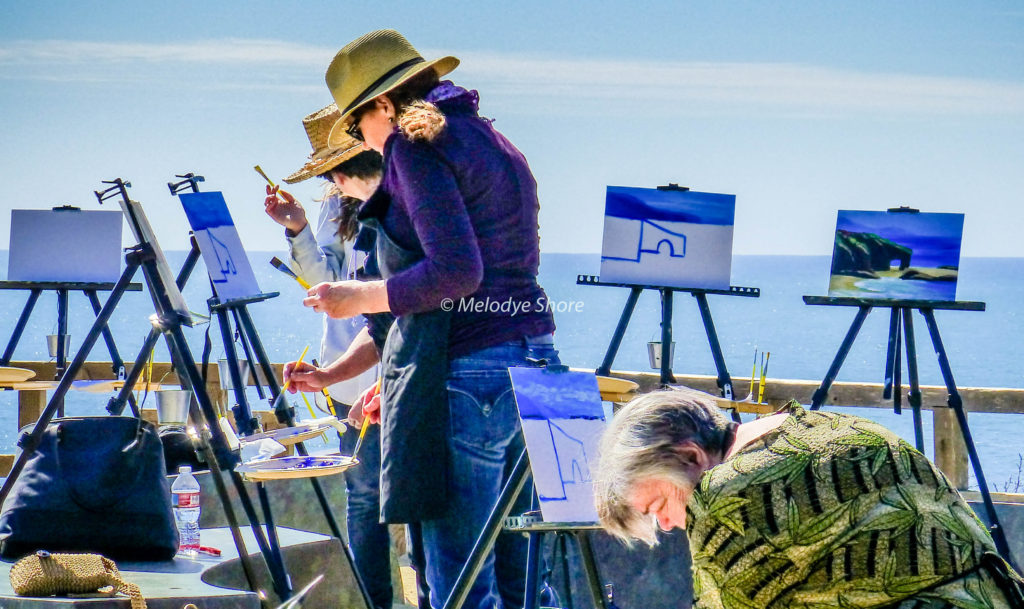 The instructor was genuine in her praise, and most students seemed to appreciate her occasional redirect.  The class objective? To reproduce the painting on the far right, which was itself a reproduction of a rock formation in the cove below.

Truth be told, I started feeling restless. Such an arduous, painstaking task! Like most creative types, I pull from a grab-bag of tried-and-true techniques, easily mastered. I’ve learned that it’s far too easy –and dangerous– to focus our energies on straight-ahead instructions, easily reproduced. I like to experiment, make mistakes, discover. 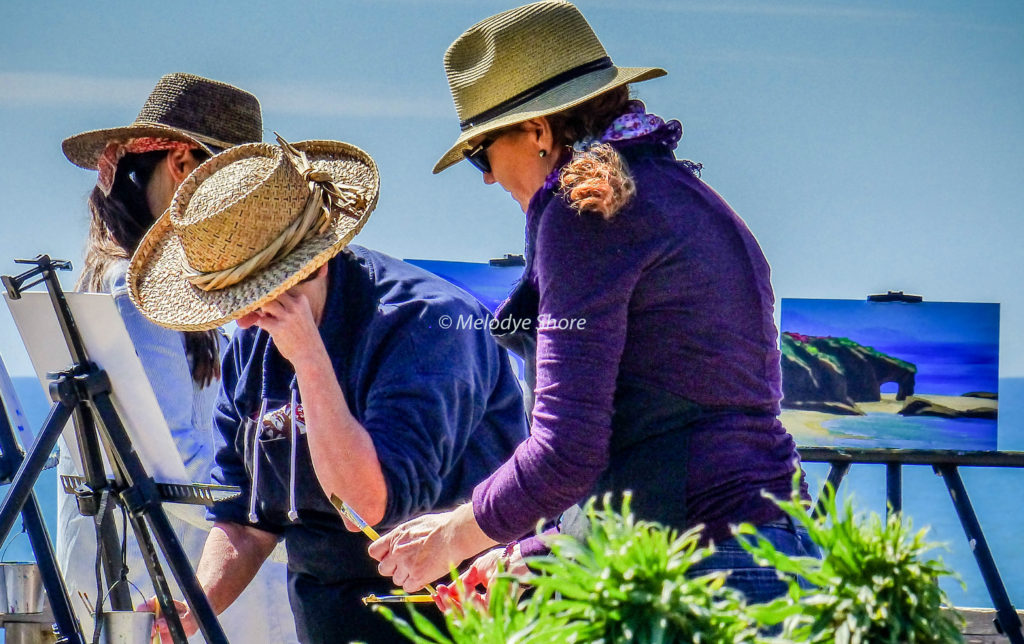 F-stops, shutter speed, and the Rule of Thirds; strong verbs, sensory images, and character arcs. These are the basic elements of storytelling. I want a working knowledge in my fingertips. But I’d never trade away my wide-eyed sensibilities (my unique perspectives) for that muting thing we writers call “structure.”

For me, creativity comes of exploring a rugged archway–born of earthquakes and raging tides–and chance encounters with tourists who pass through its frame.  It’s inspired by pelicans that glide silently through the skies,  waves that churn and froth at the shoreline, and salty breezes that tousle my hair.

Writing flows when I break loose from those soul-sucking musts and shoulds, lace up my hiking shoes, and plant both feet in the scene. It’s then, when I finally lose myself in the moment, that I come home to my story. 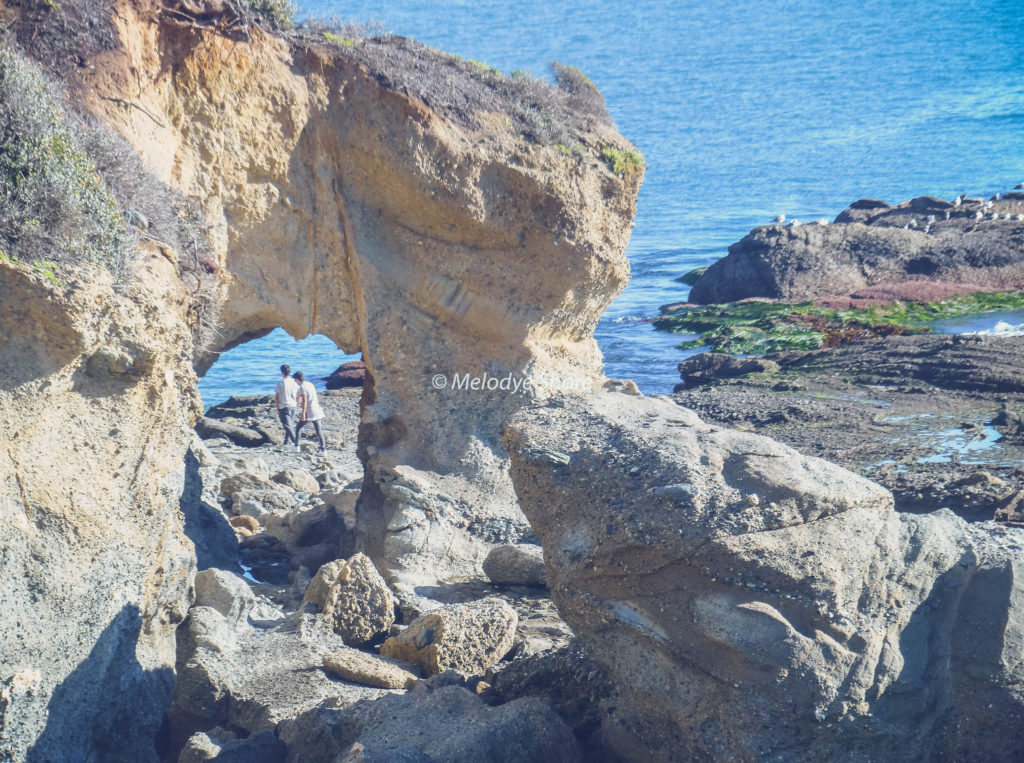 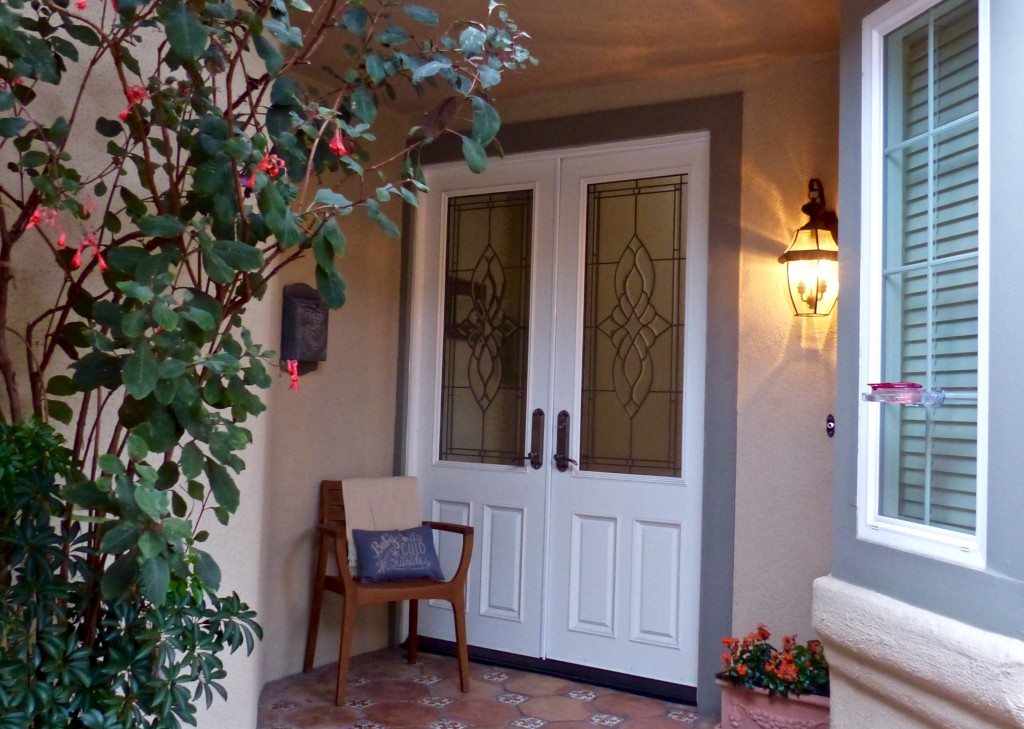 I sit on my front porch almost every morning, steaming coffee mug in hand. From this vantage point, I can watch coyotes scramble up the hillside–silhouettes that erupt from gauzy shadows, and then vanish in the dark. I hear songbirds, warbling their morning tunes in a nearby sycamore tree, and the whir-thump of the morning newspaper, out for delivery. Hummingbirds cross my field of vision, making territorial clicks as they dart between the window feeder and the fuchsia, a safe haven in which they build their nests.

The marine layer lifts. Wispy, cotton-candy clouds are set aglow by the sunrise. I breathe deep the cool morning air, eyes wide open so that I don’t miss a single, wondrous thing.

On the kitchen counter: my computer and daily to-do lists. But I pour myself one last cup of coffee, savor the last vestiges of dawn before heading inside. Routines can wait, I tell myself, and no real harm has ever come of sitting a while longer, at the threshold of here and there.

Strange as it might seem to say, my brother’s hospice stay helped crystalize my thoughts about Father Junípero Serra’s canonization ceremony. Though I was personally conflicted, I was glad for the opportunity to witness this historic event firsthand. But it was during Roger’s illness, and his eventual passing, that I eventually found the words I needed for this follow-up blog entry. To wade into troubled waters, unafraid.

My moment of clarity came at Roger’s bedside when, plastic water pitcher in hand, I harkened back to an author’s chat with Anne Lamott. She spoke to us about a good many things, including Grace, which she described as “a glass of cool water from the flow of the Beloved.” I nodded, then as now. We tap into Grace when we ferry endless cups of water to the parched and suffering. We catch glimpses of Grace in a spoonful of ice chips, skimmed across the fevered lips of a cherished other. Crystal clear, Light-reflecting water. And the tears that flow, theirs and ours? Rivulets of Grace, flowing to and from the Source. 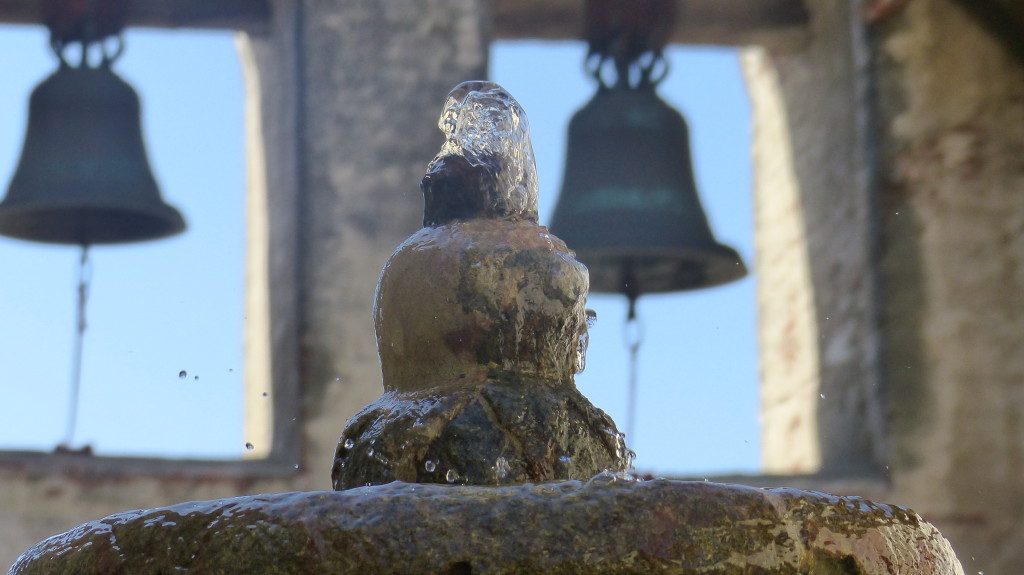 I thought about how, in fast-tracking Father Serra’s path to sainthood, Pope Francis must’ve known that decision would ignite the burning embers of controversy. Opinions were–are–sharply divided. While acknowledging Serra’s mixed legacy, some  believe he should be judged in the context of the era in which he lived and worked. Such is the case with my new friends, pictured below.  However–and without judging the source of his missionary zeal–historians agree that Serra (along with his fellow Franciscan friars) committed crimes against humanity.  In elevating this colonial padre to sainthood, would the pontiff also call him (and the Church) to account for his actions? 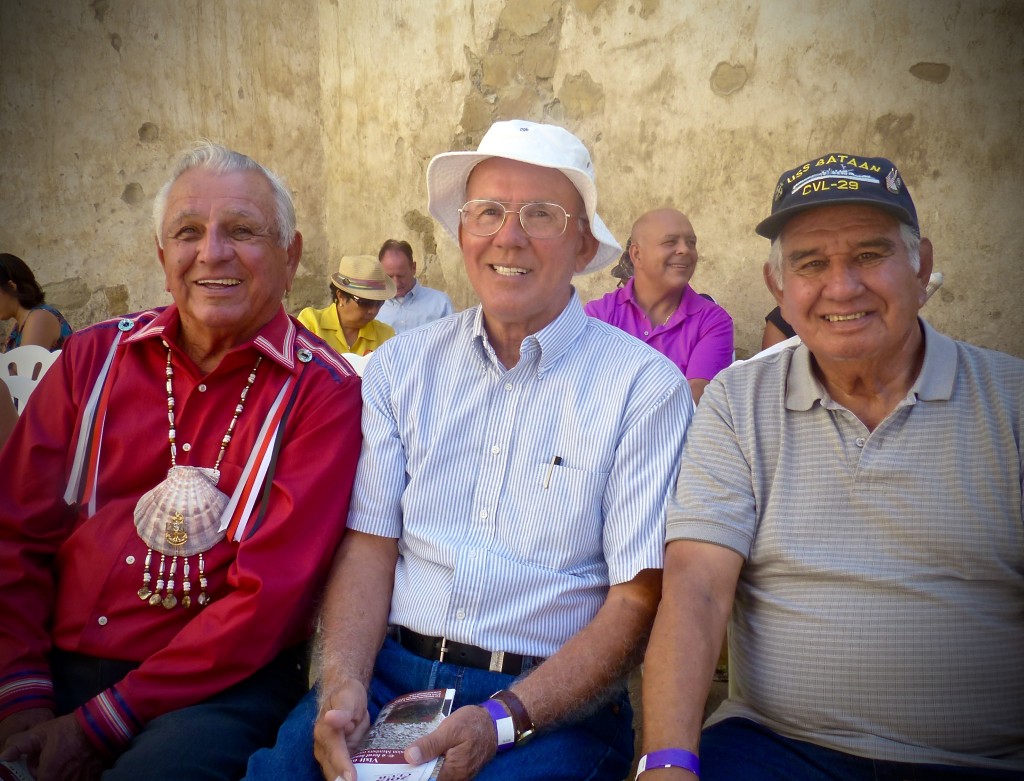 Happy, Wick, and Baby are elders of the Juaneño Band of Mission Indians, Acjachemen Nation. Their direct-line ancestors were conscripted to build and inhabit the San Juan Capistrano Mission.

It wasn’t out of the realm of possibility. The pope might view this historic occasion as an opportunity to personally address tribal leaders who circulated petitions to oppose the canonization. In his homily, he could respond directly their myriad letters of protest, as-yet-unanswered by the Vatican. In a Catholic mass, live-streamed around the world, he could weigh the practices of conversion against the larger issues of human rights. How better to heal any open wounds, than to administer a measure of Grace?

It would be surprising move, perhaps; but then again, this pontiff has a penchant for the unexpected. He expresses tolerant and compassionate views. He pushes the boundaries on social issues, more so than some of his predecessors. In my heart of hearts, that’s what I hoped for. Naïve or no, it was the prayer on my lips when the ceremony opened with the traditional ringing of the bells.

But as my Nana used to say, “If wishes were horses, then beggars would ride.” Meaning: That’s not the way things unfolded. In his homily—broadcast from the Basilica of the National Shrine of the Immaculate Conception—Pope Francis characterized Father Junípero Serra as a kind-hearted padre who protected Native Americans from colonizers—a trailblazer who relished the opportunity to spread the Gospel throughout California, while also preserving local customs and cultures. 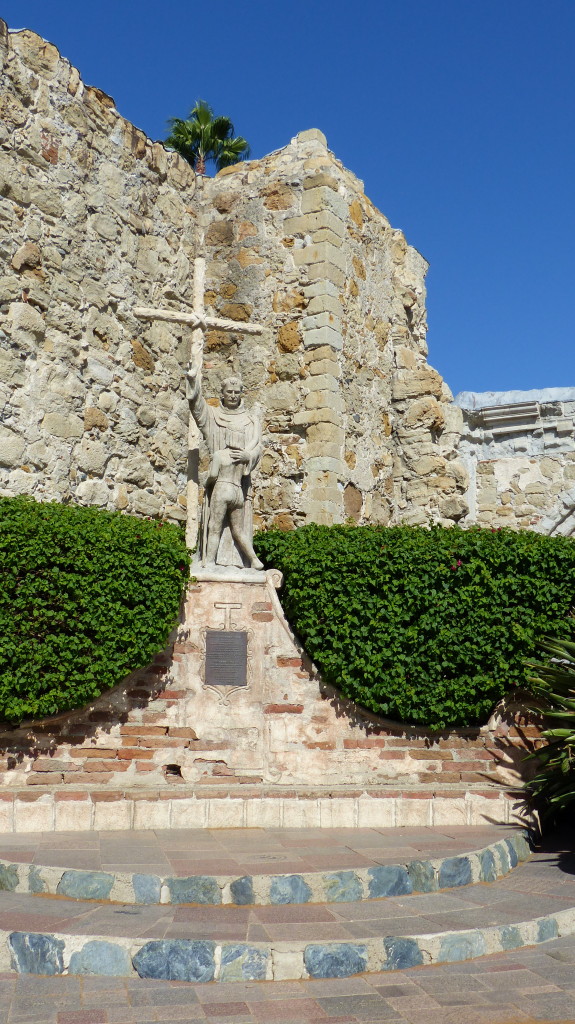 Monument of Junípero Serra and a Native American boy. At Mission San Juan Capistrano, the 7th of 9 missions Serra founded.

In this uncharacteristically passive excerpt, Pope Francis attributed the known atrocities to a nameless enemy:

Junípero sought to defend the dignity of the native community, to protect it from those who had mistreated and abused it. Mistreatment and wrongs which today still trouble us, especially because of the hurt which they cause in the lives of many people. 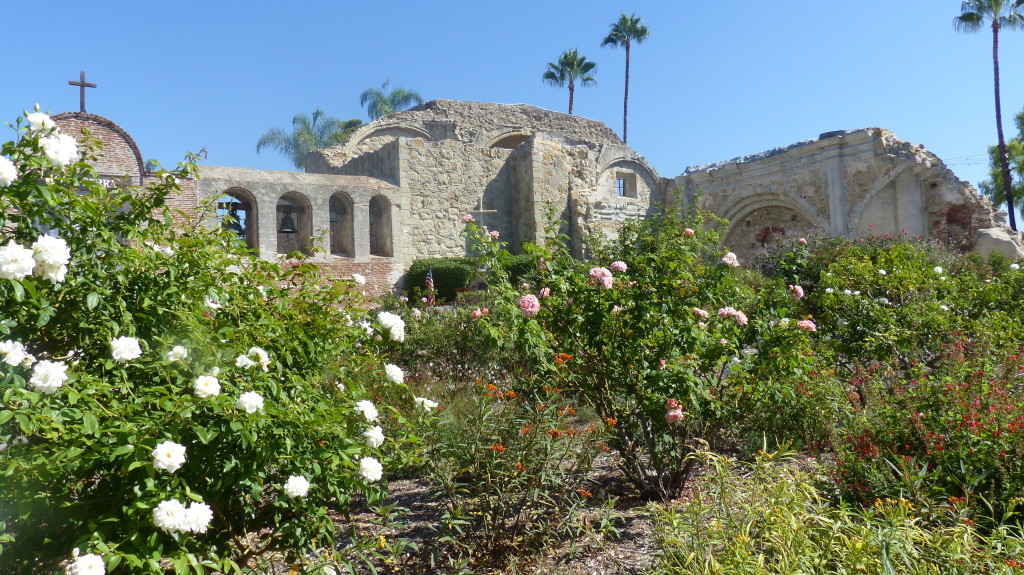 Pope Francis spoke at length about the importance of missionary work, related the joys it brings and spreads, and described Father Junípero Serra as a humble servant who fulfilled Jesus’ commandment to His disciples:

Jesus said: Go out and tell the good news to everyone. Go out and in my name embrace life as it is, and not as you think it should be. Go out to the highways and byways, go out to tell the good news fearlessly, without prejudice, without superiority, without condescension, to all those who have lost the joy of living. Go out to proclaim the merciful embrace of the Father. Go out to those who are burdened by pain and failure, who feel that their lives are empty, and proclaim the folly of a loving Father who wants to anoint them with the oil of hope, the oil of salvation. Go out to proclaim the good news that error, deceitful illusions and falsehoods do not have the last word in a person’s life. Go out with the ointment which soothes wounds and heals hearts. 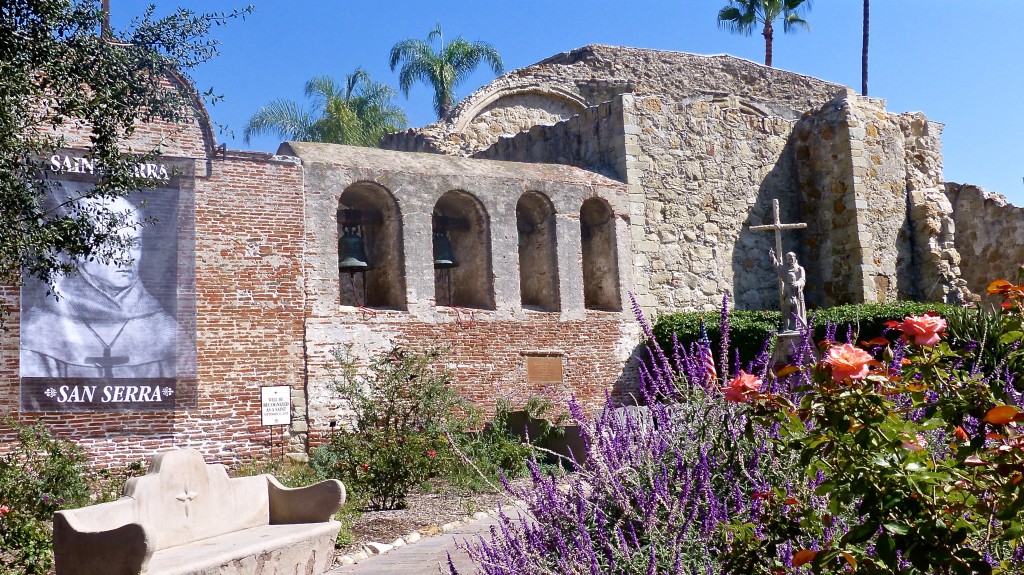 He then declared that, in meeting that commandment with an open heart and willing hands, Father Serra proved himself worthy of sainthood. 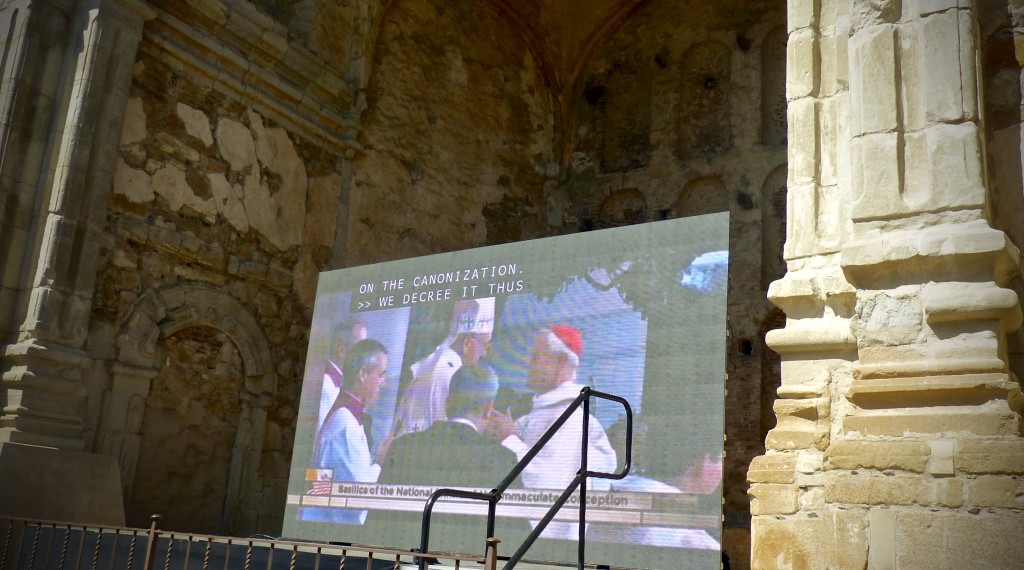 The moment of canonization, as seen from within the vaulted walls of the Great Stone Church Ruins of Mission San Juan Capistrano.

In pivoting to this final note, the Pontiff completely sidestepped the more difficult truths of Serra’s legacy: 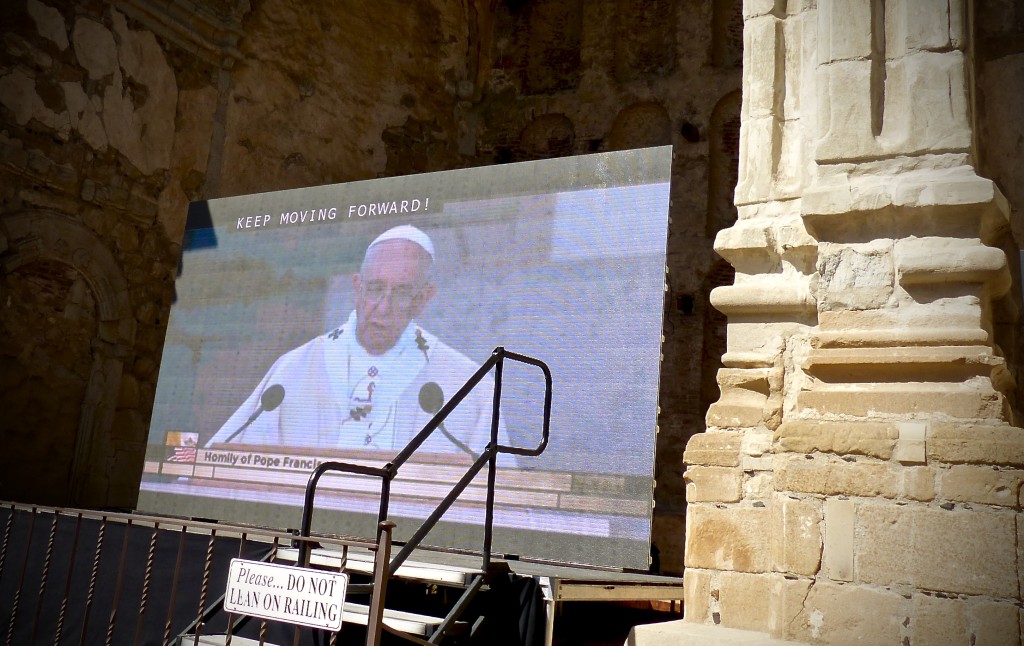 Here, a liminal moment in which Pope Francis might have delivered Grace to those who’d “hungered and thirsted after righteousness” for more than 200 years. But he walked right past that wellspring, and assumed his traditional place at the altar where a trio of ornate chalices rested. 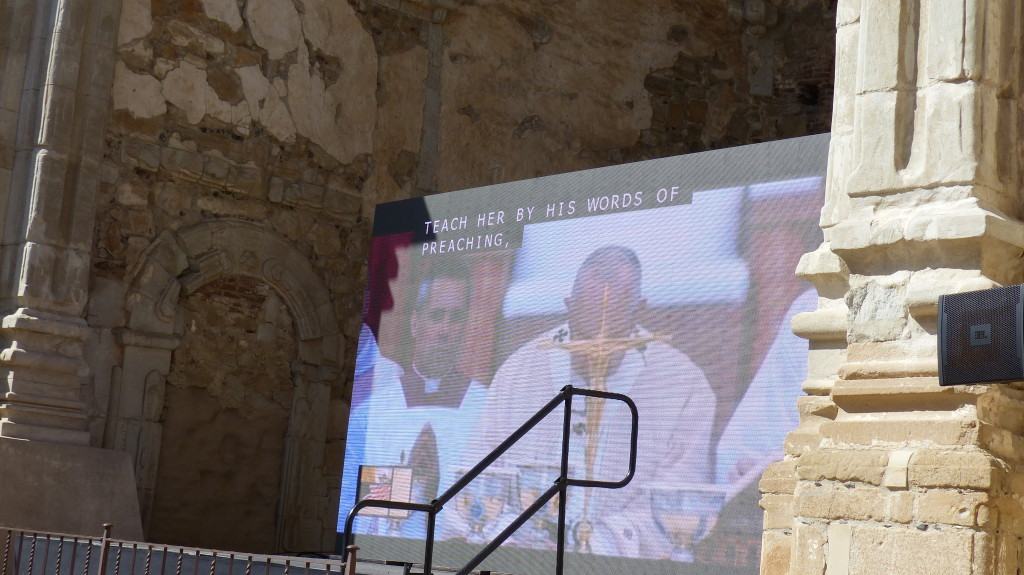 Time and again, my camera leads me to the threshold of discovery, that shimmery place where boundaries dissolve and new worlds reveal themselves to the willing traveler. Today’s photo challenge, liminal, is new to my vocabulary. I explored its depths and breadth by reading, took notes, and then translated my findings into words and pictures that make sense to me.

Liminal comes to us from the Latin word limen. In the literal and figurative sense, it refers to some kind of boundary or threshold. And as you know, we encounter lots of jumping-off, stepping-over, and slipping-through, liminal moments in our lifetimes.

Sometimes we find ourselves drifting in a place that’s neither Here nor There, perhaps waiting on some unseen hand to lift the misty veil of uncertainty. So it is with many things, the creative process among them. It’s a shallow place, with dangerous undercurrents. Our inner critic calls out from the rocks, sings to us the siren songs of despair and disillusion. If we’re the impatient optimistic sort, this quickly leads us to the liminal point where we haul in the anchor and set sail for the Uncharted Place where anything is possible. 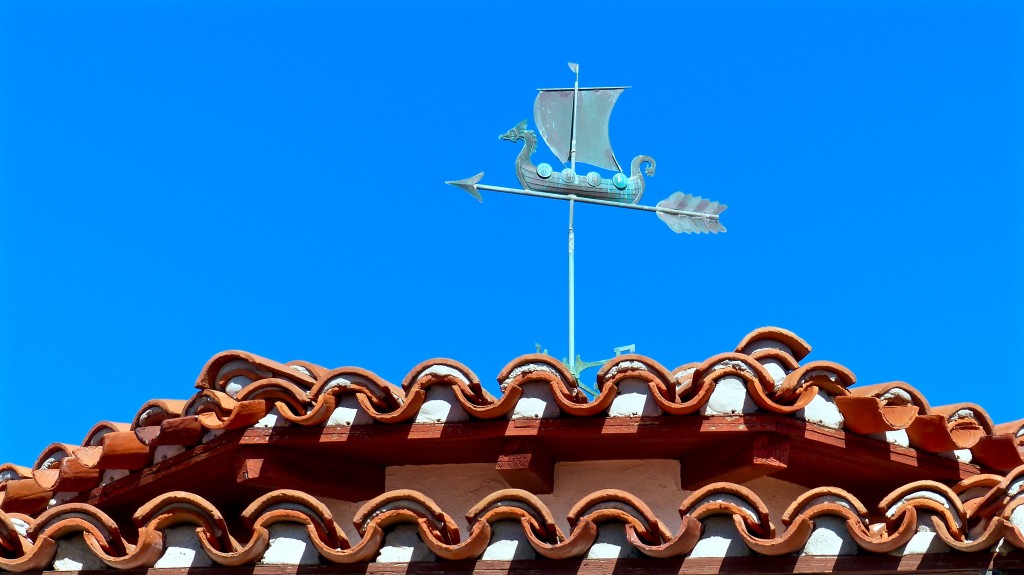 Forest openings and locked gates, prison towers and poisoned apples…the hero’s journey is fraught with choices. Real and imagined dangers lurk around every corner. Read another way, it’s these liminal moments that shake us awake at dawn and–assuming there’s a fairy tale ending–lead us from Once Upon a Time to Happily-ever-after. 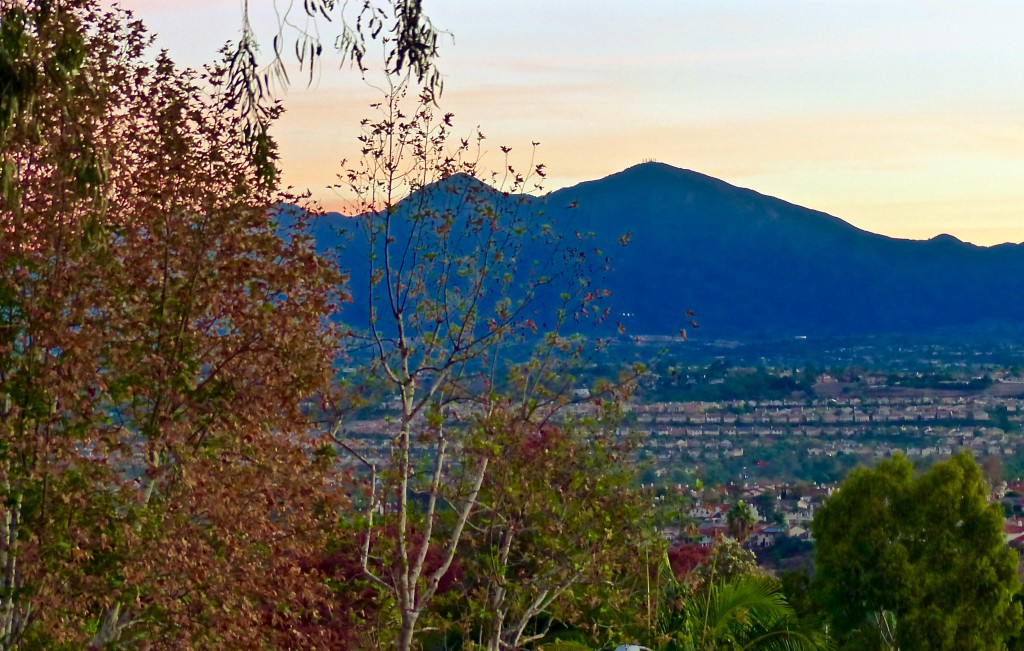 Liminal points can also be literal. Stucco archways that frame the ocean, mosaic tiles that arrest your eye, and the staircase that meanders down a flowery path before finding its sandy terminus at the water’s edge…all liminal. 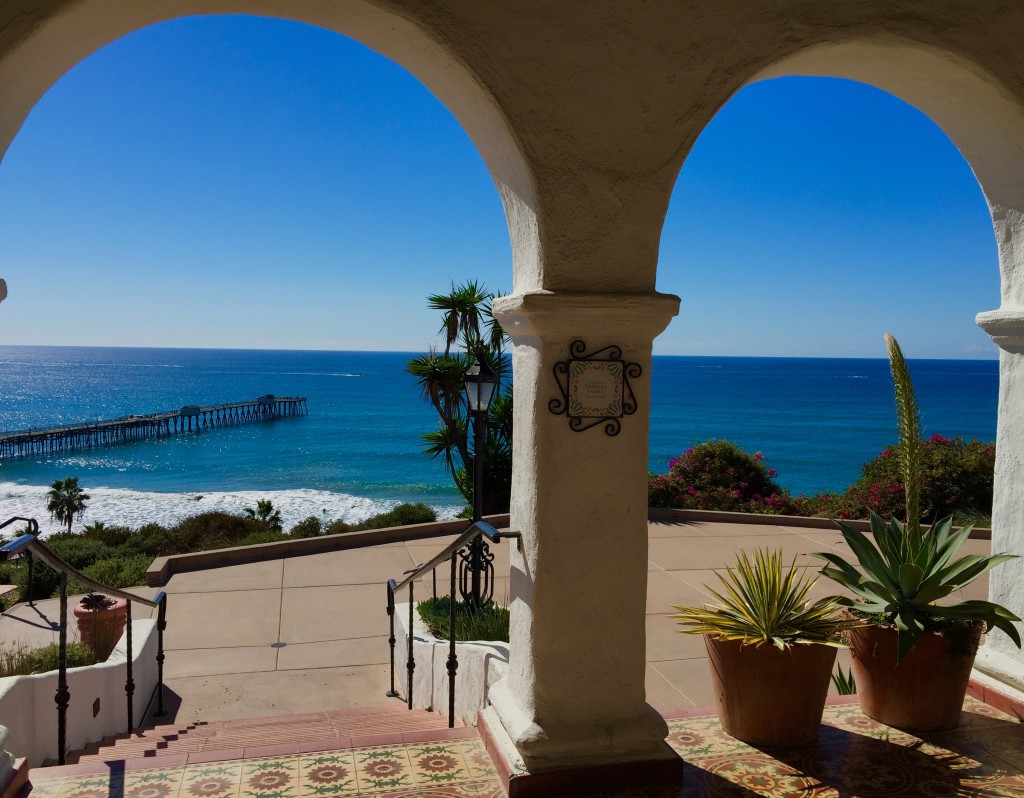 A liminal space invite you to step over the threshold, to knock on the door between Here and There. Maybe it’s inside, maybe it’s outside. It all depends on where you’re standing when the door swings open. 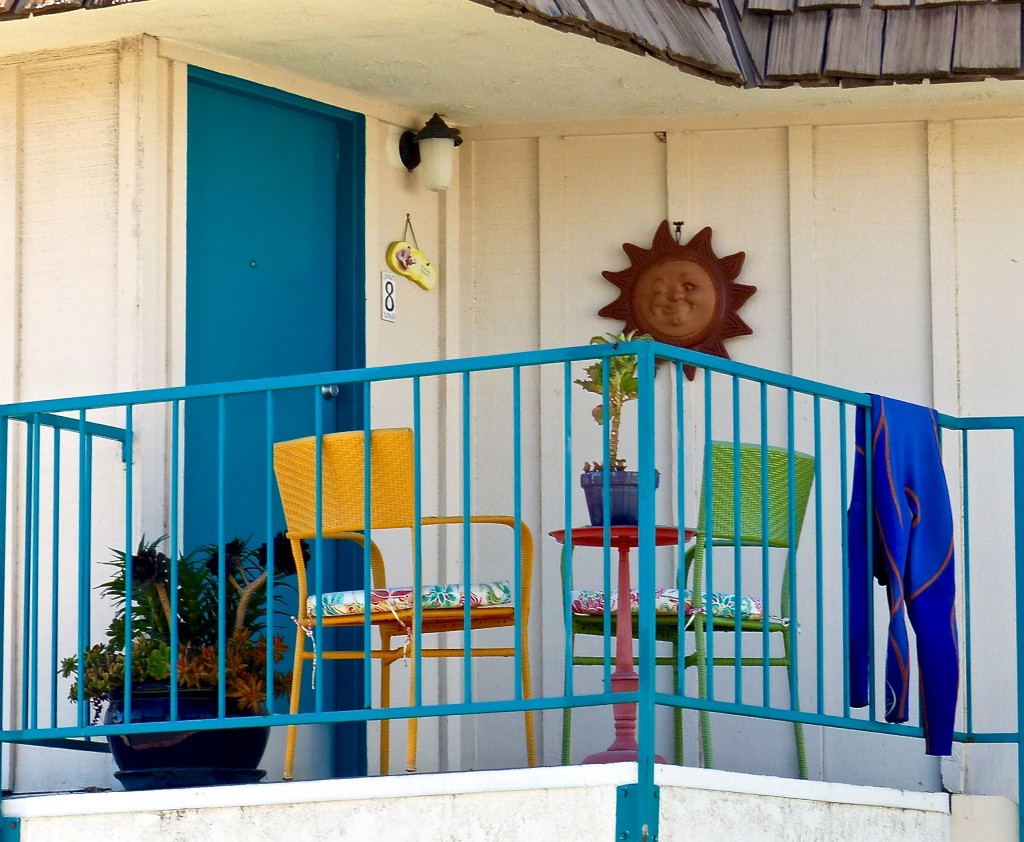 Liminal things: India ink, spilling from the nib of a storyteller’s pen; plumeria buds, unfurling into snowy white pinwheels with yellow centers; and water that bubbles and bursts, escape and return to their oyster shell existence. 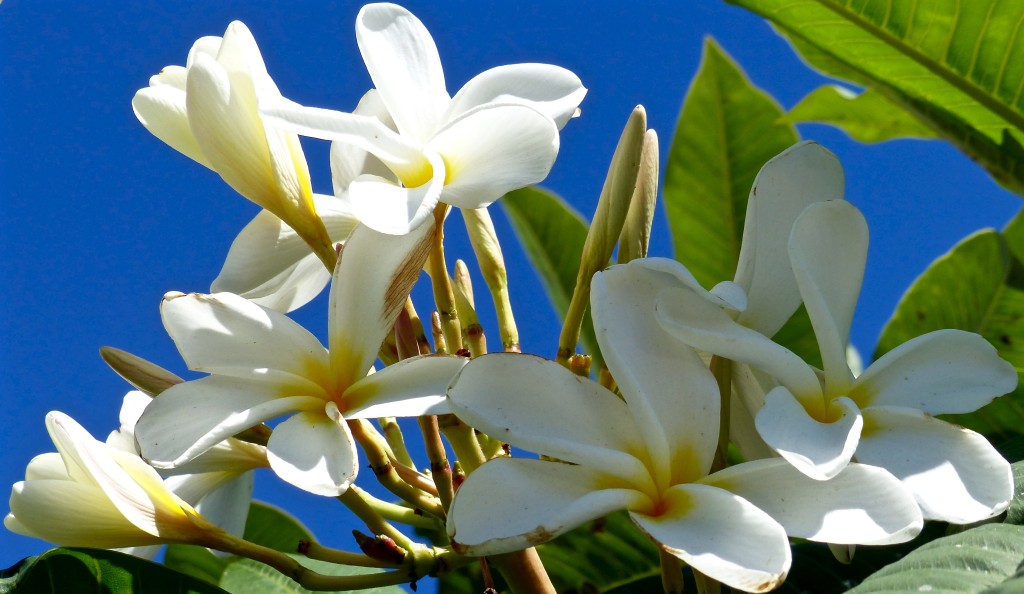 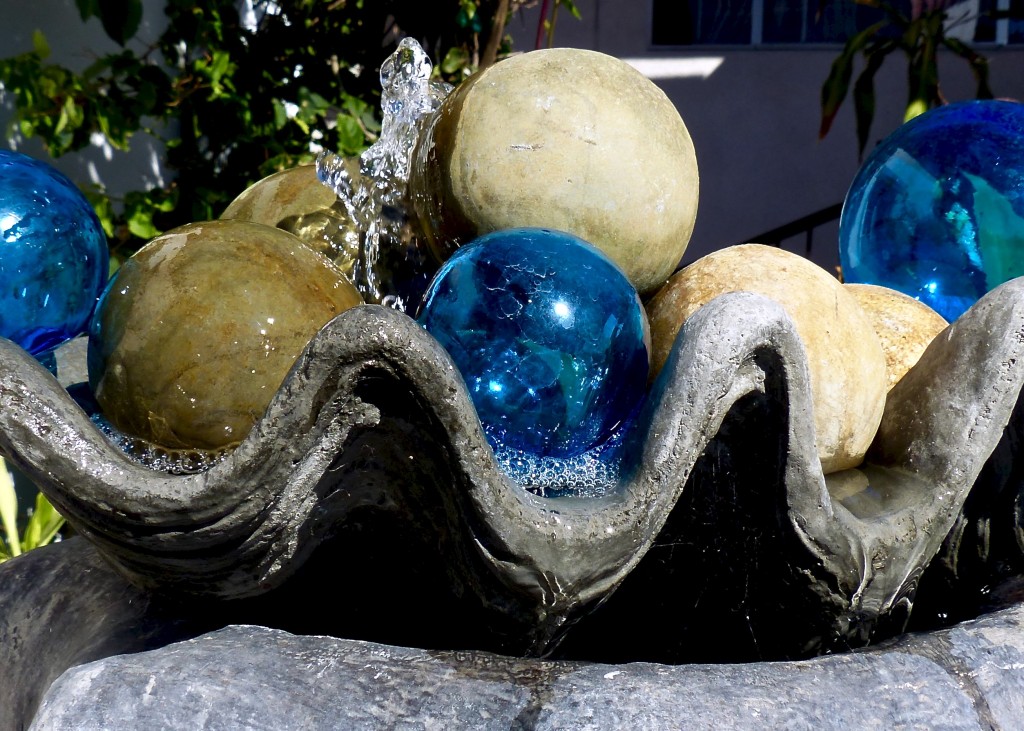 Liminal events are the portals of transformation, the handmaidens of sacred rituals. 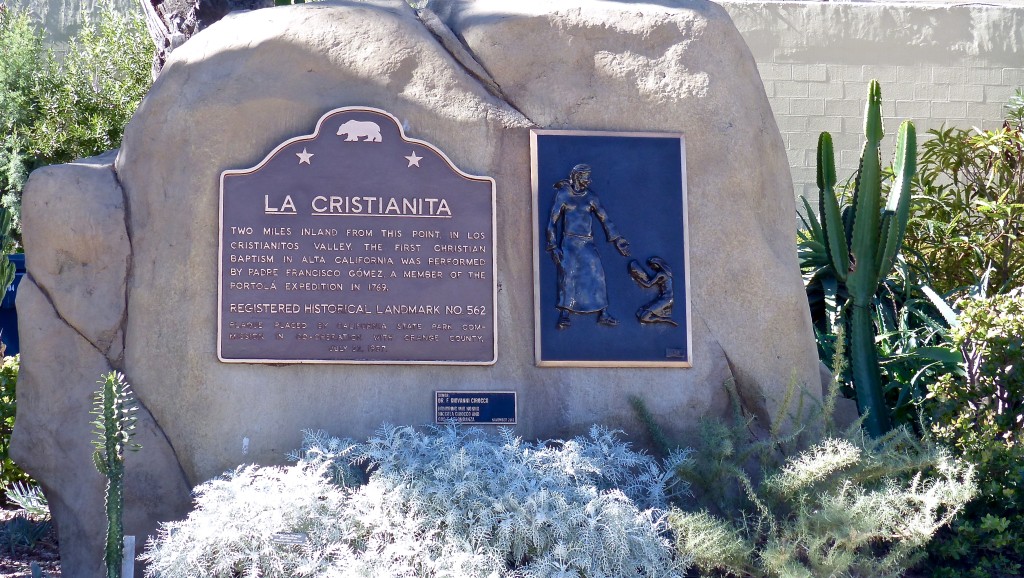 Always and Never, Everywhere and Nowhere…liminal points open up for interpretation the concepts of time and space. Perspectives shift. Feelings are transient. We listen for the space between the notes, and the things we once took for granted are now recognized as ephemeral. 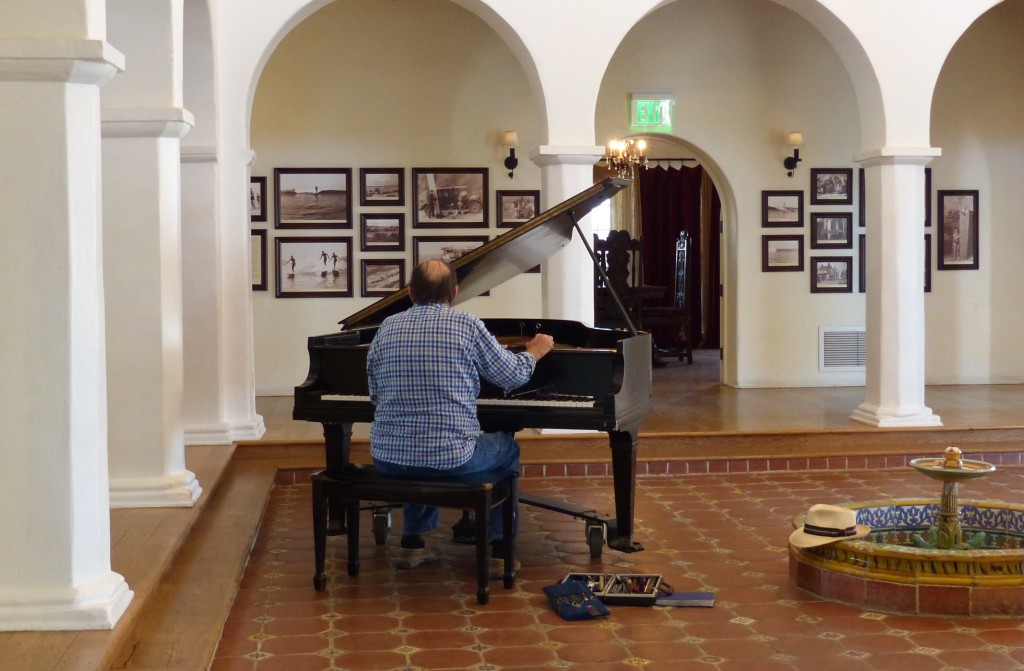 Piano tuner at Casa Romantica. I’m fascinated by the placement of his hat. It occupies a liminal space.

Camouflaged as it is by dappled shade, this leaf suggests the liminal qualities of life itself…the interplay of shadow and light, and the interstices between being and not-being. Whoa, that’s deep. 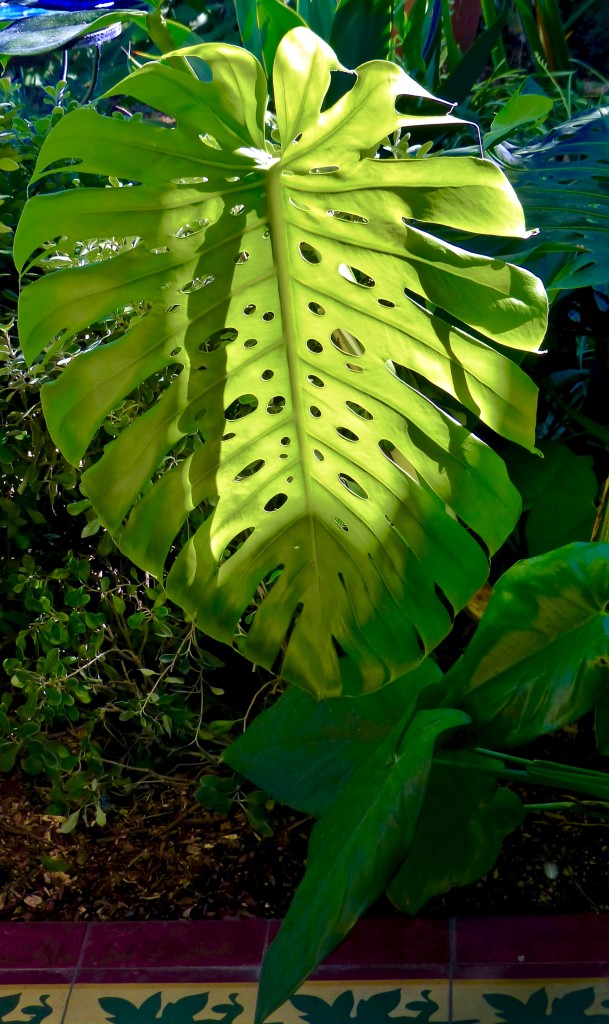 Liminal. I rather like this word, don’t you? It’s mental yoga for people like me, who do some of their best thinking behind the camera lens.  I’ve only just brushed the surface, so please, weigh in with your own definitions and examples!

On a more personal note: During my brother’s illness, I didn’t give much thought to my promise to do a write-up about Father Serra’s canonization ceremony. It got reprioritized again, in that liminal time after Roger’s passing. But while it’s more succinct than I originally envisioned, it’s ready now. I’ll post it after the weekend.