Ahoy, me hearties!  Gather ‘round, and I’ll tell ye about my jolly adventures at Victoria Beach, and a fantastical place we locals call Pirate Tower…

I traveled on foot with a merry band of tide pool docents, in search of sea stars and other ocean treasures. We met at Goff Island (near the Montage Resort in Laguna Beach, California) and headed north. Not a strenuous hike, by any means, and what about that view??? 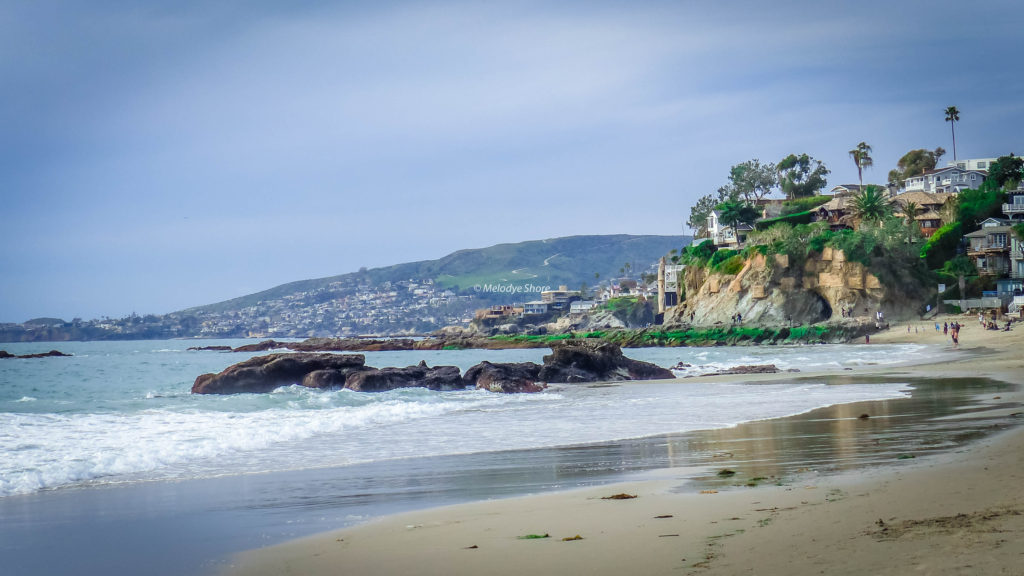 When we reached the north end of Victoria Beach, we ventured into a small cove. Sugarloaf Point–magical name, don’t you think?

Like a turret on a storybook castle, a 60-foot-tall concrete structure rises from the rocky shoreline, tilted ever so slightly toward the affluent neighborhood on the bluffs. 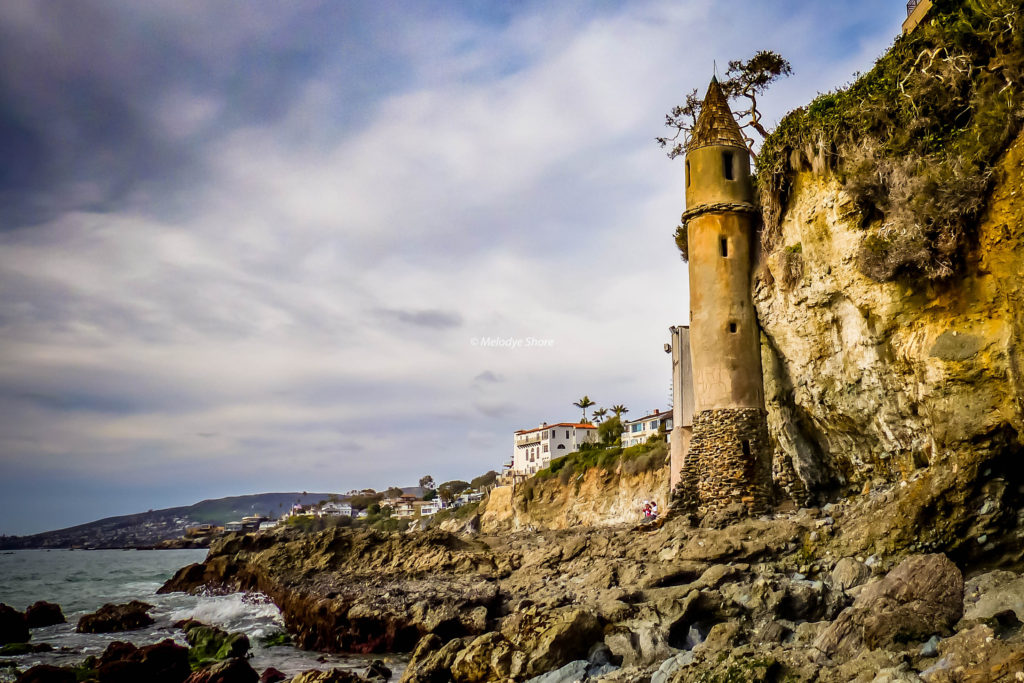 Weather-worn roof shingles. Rusted metal grates. Tiny portals and a spiral staircase, battered by sea spray and never-ending tides. There’s an oversized entrance, too—bolted and padlocked, of course. If I didn’t know better, I’d think it was inhabited by giants!

At the base of the tower sits a circular concrete pool, large enough for…well, lots of people. Word has it that this unusual swimming pool fills alternately with sand and seawater, depending on the tides. 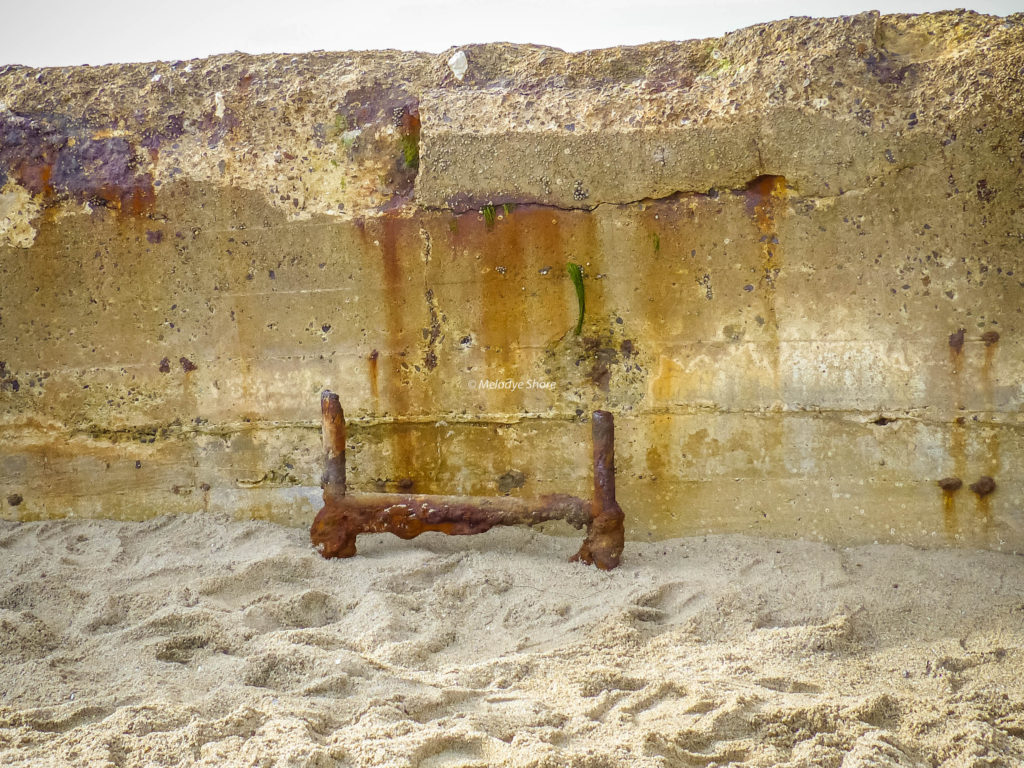 Fix your sites on the ocean beyond, and you can almost picture a swaggering buccaneer staring back at you. 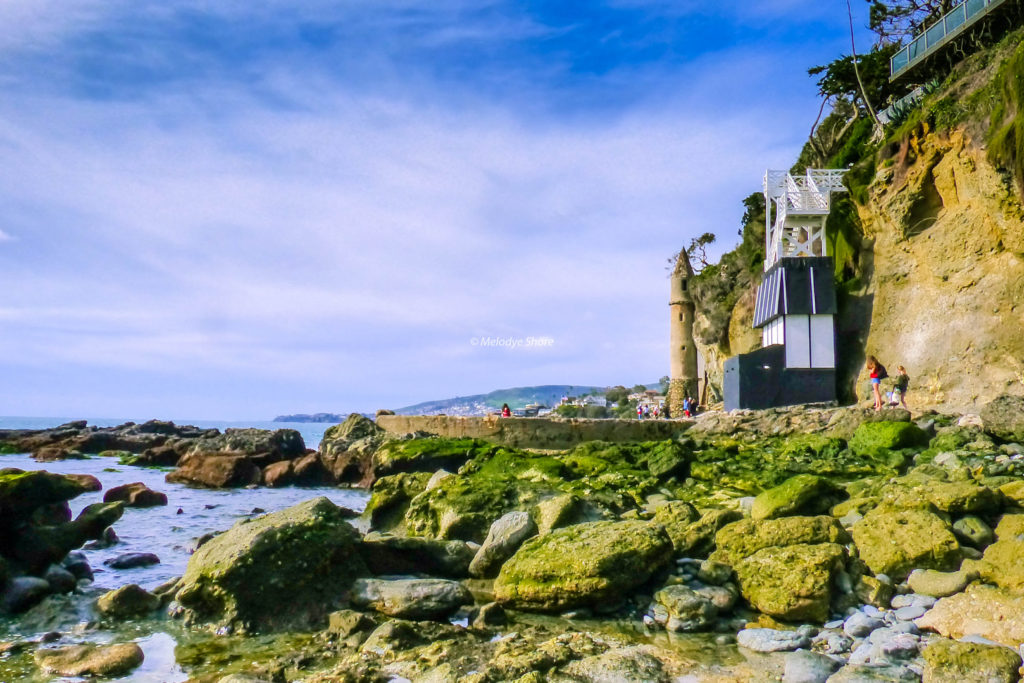 If you’re not into pirates, maybe this scene brings to mind a favorite fairy tale. If you tilt your head just so, and maybe squint just a little, you might see Rapunzel at at one those rectangular windows, blonde tresses flowing, as her handsome prince clambers over the rocks to rescue her. 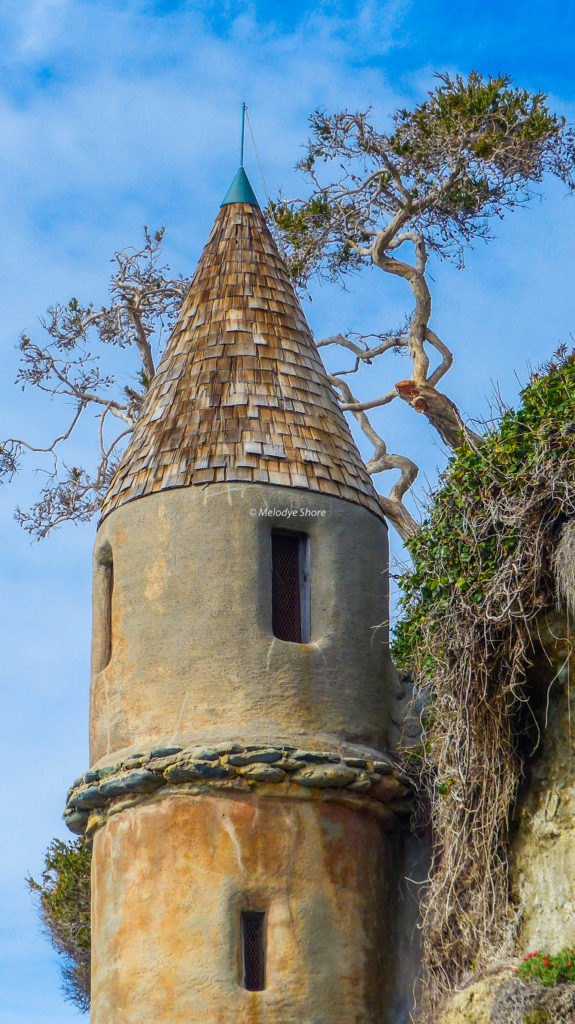 Alas, reality is somewhat less romantic. Built in 1926, Le Tour (as it was affectionately called back then) afforded its owners a private access between the beach and their cliff-top residence. 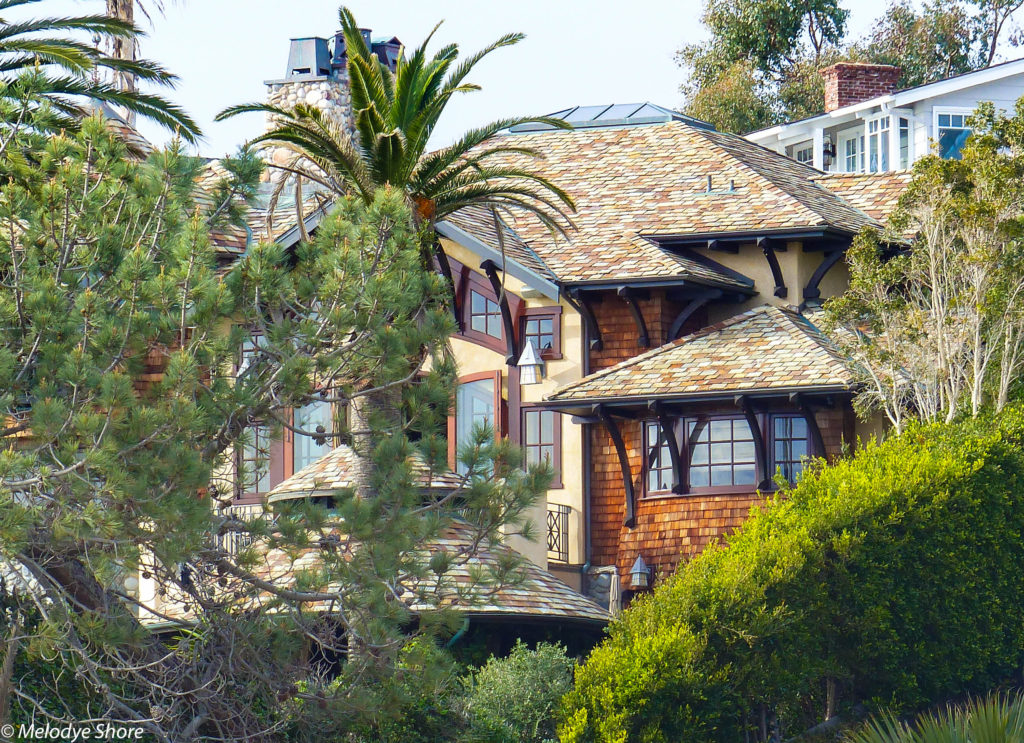 French Provincial Revival. That’s what the textbooks call this architectural style. Enchanting. That’s what I call it. Admire for a minute the gabled roofline, the slate roof and stained glass windows. I think the original owner (Senator William E. Brown) built for himself a gingerbread house!

At some point in the early 1940s, Sen. Brown sold the property to Harold Kendrick. He was, shall we say, a bit of an eccentric. It’s possible the retired naval officer spent too much time at sea, because he fancied himself a modern-day pirate. Dressed as a seafaring plunderer, Howard (aka The Question Man) strolled the boardwalk, distributing nickels and dimes to children who answered correctly his arithmetic, vocabulary, science, geography and history challenges. According to local folklore, he’d also tuck coins into the nooks and crannies of his tower. Neighborhood kids loved to scour the facade for hidden treasures—finders, keepers, as they say! 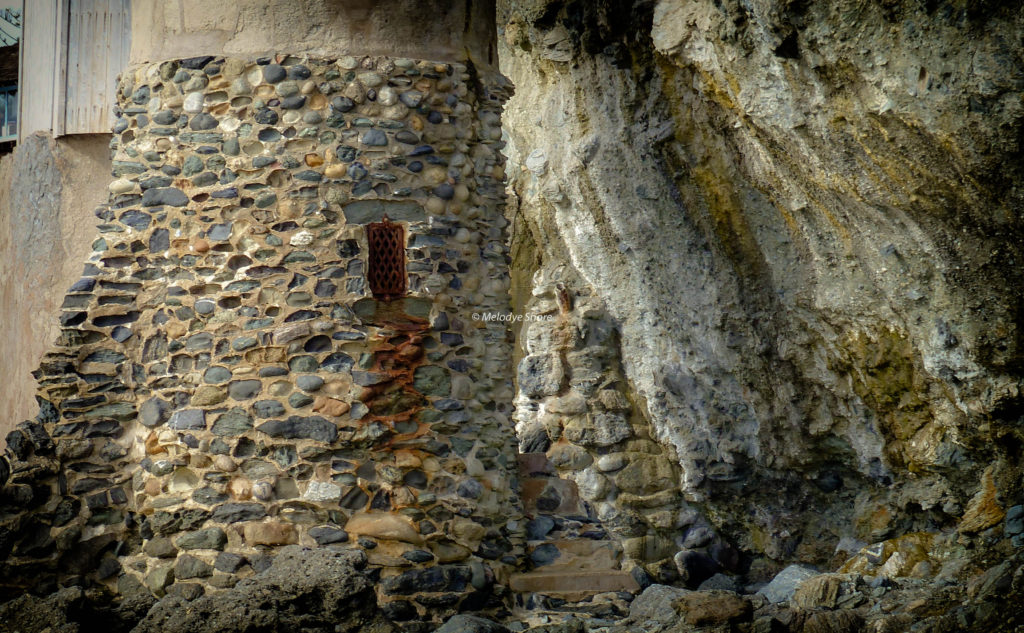 Time passed. The house and tower changed hands, many times over. One of its most recent owners was Bette Midler, star of the 1988 film Beaches. Some of the most memorable scenes were filmed at one of Crystal Cove State Park’s historic cottages, just a few miles away. The Divine Miss M took it upon herself to return the house to its original glory, but the tower shows its age. Even so, it holds a special place in our hearts–a battered but unbowed sentinel, bearing witness to the past.

But our story doesn’t end there. We came for the tide pools, at the far reaches of the jutting shoreline. But Old Man Winter had eroded the sandy beach, leaving behind a rocky terrain for us to explore. So we did. Then we traversed the algae covered rocks, waded through chest-high sea water, and ventured out to the very end of this island. 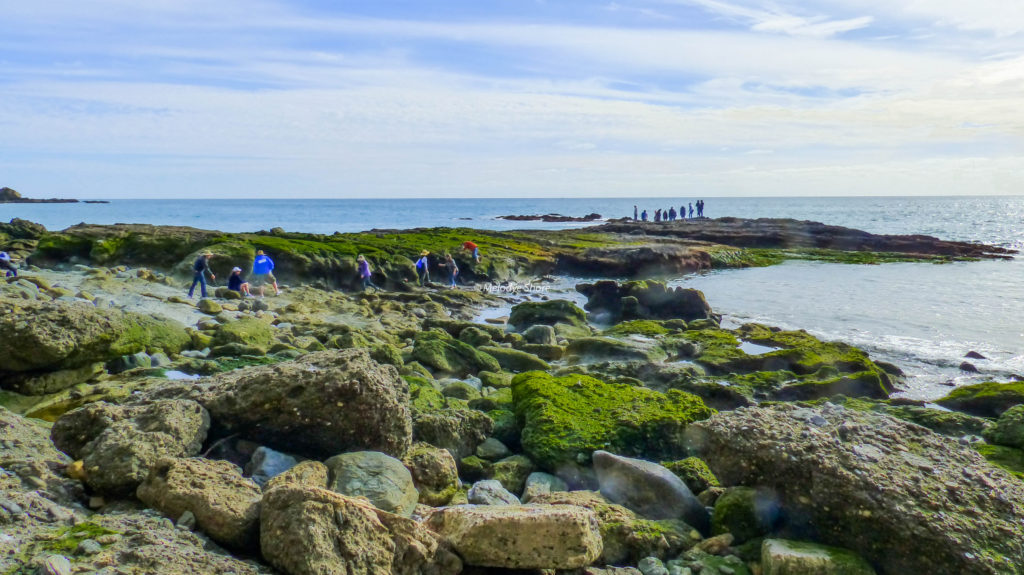 At least some of us did. I’m not a strong swimmer, so I hung back and made pictures. 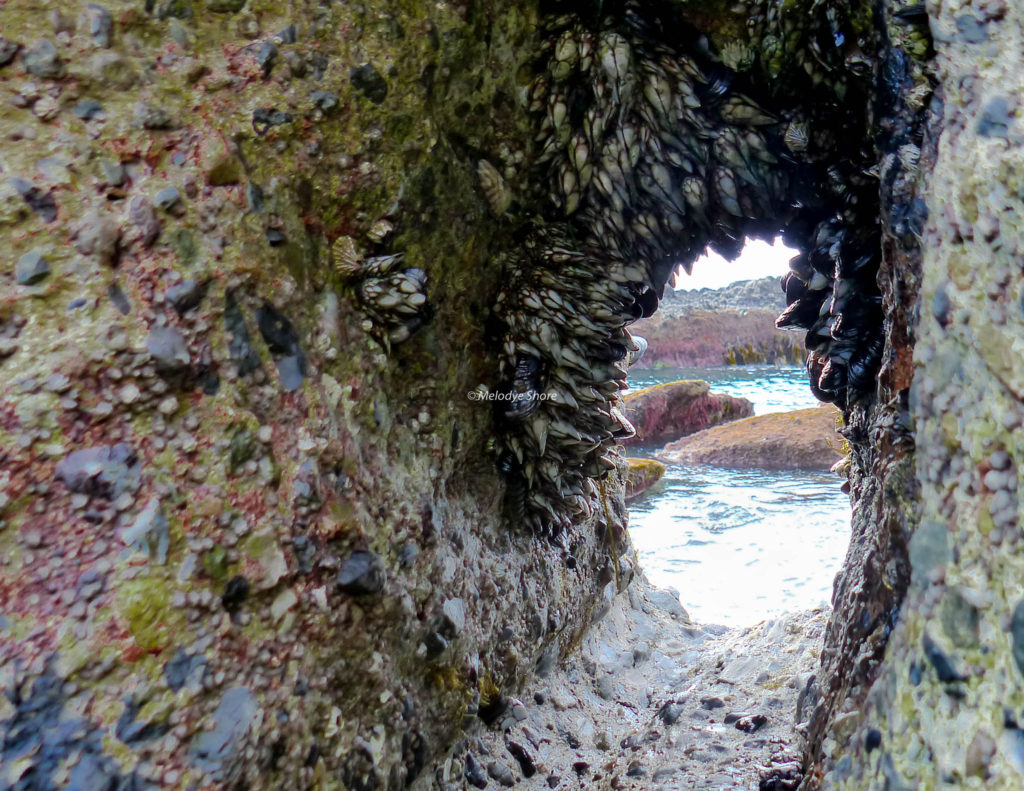 Like miniature treasure chests, the tide pools were filled with wondrous things: sea stars and anemones, mussels and more. My friend Gretchen discovered these sea stars–so lovely of her to share! 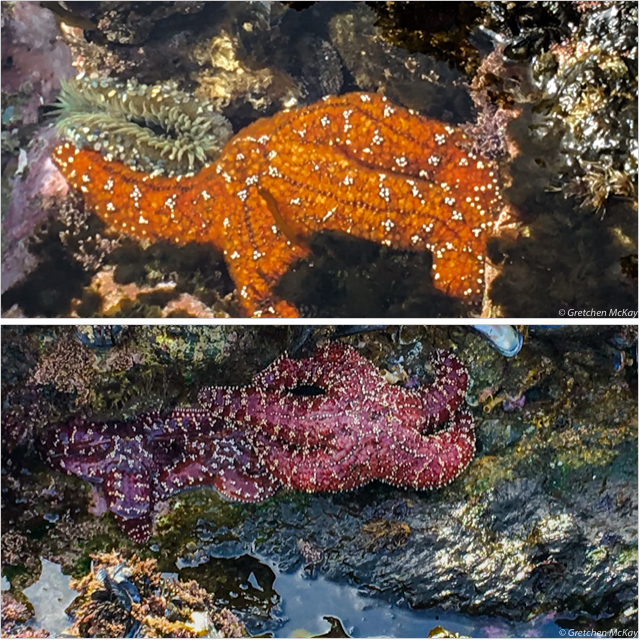 And that’s where this adventure ends… this chapter, but not the whole story. I’ll visit again s00n, and who knows? Maybe I’ll have my sea legs by then.

If you plan to visit: The tower’s accessible at low tide only, but that’s okay, because that’s also the best time to explore the tide pools. (Check the NOAA tide tables here, and find directions here.) Please note that this is a Marine Protected Area. Loosely translated, that means you should tread lightly. Enjoy but don’t disturb any creatures you find, and leave everything in its natural habitat. Take home memories, but leave the seashells behind.

One more thing. Okay, maybe two. Hiking shoes will serve you better than flip-flops, especially on those slippery rocks. And watch for wave surges–as per usual, I got soaked when I snapped these pictures. 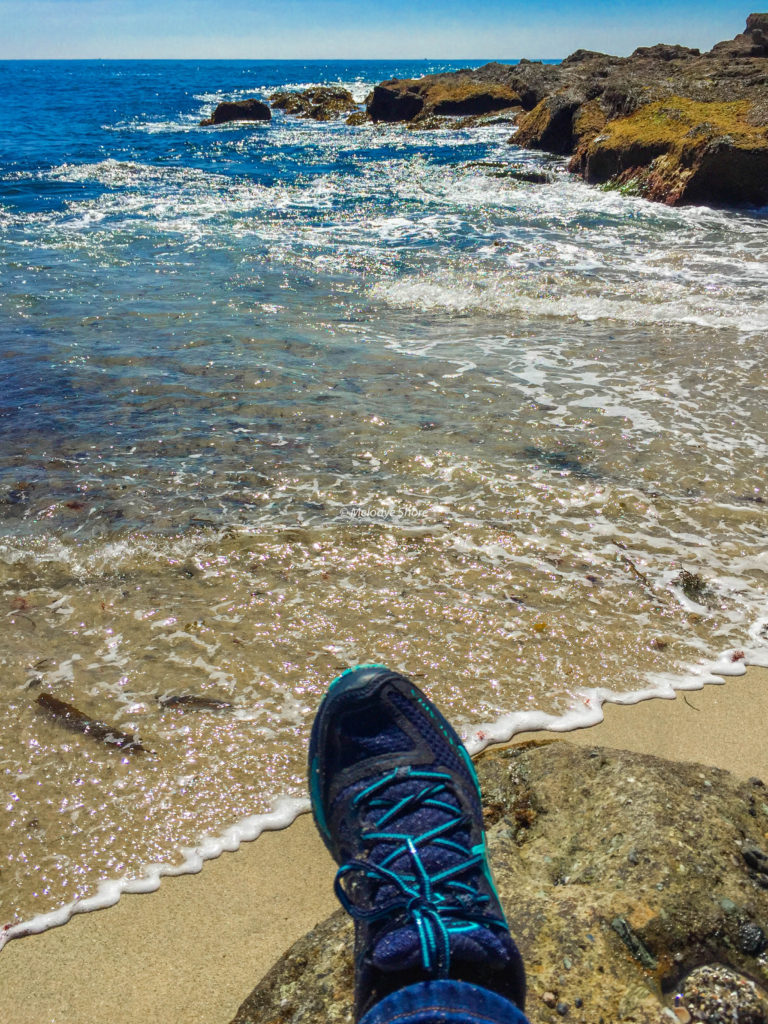