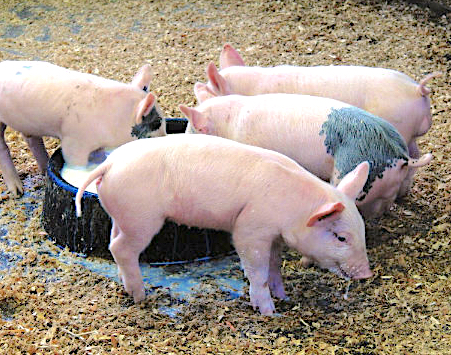 Piglets at the County Fair. Cute as BUTTONS, aren’t they?

The crowds are bigger at the pig pens than almost any other attraction at the fair. And no wonder: Is there anything cuter than wriggly pink piglets, kicking up sawdust as they run circles around their mama?

#AugustBreak2019, Day 4…The theme of the day is BUTTONS, in case you haven’t guessed. I was going to post a photo of my Nana’s button collection, but it’s been a rough 24-hour news cycle. Two mass shootings within 24 hours… 29 fatalities and multiple casualties. I mourn their loss and speak their names.

I feel, as you do, the gravity of this moment. But I believe we are better served by optimism than resignation. Joy in the morning, and lightness of being. So for today’s prompt, I chose silly over serious. To wit: Pink-snouted, snuffling piglets to the rescue! Think of them as a gift, aka a “happy,” with curly ribbons as tails. #JoyInTheMorning

P.S. Yesterday’s prompt was LINE. In this news photo, El Paso residents are waiting in a two-hour line to donate blood for the victims of the first of two mass shootings in a single day. (Image via CNN. I was too teary-eyed to take photos.)  #AugustBreak2019, day 3