Remember the lively conversations we once shared around the family table on Sundays? If you close your eyes, can you also recall the delicious aromas that wafted from the kitchen? Fried chicken and cornbread, syrupy pancakes and scrambled eggs…food so tasty, its closest rival was the toe-tapping, tambourine-waving music you heard in church that morning? That’s the feeling we’re going for with #SweetSundayBrunch, a weekly Twitter chat that I’m co-hosting with the Harlem Gospel Choir. 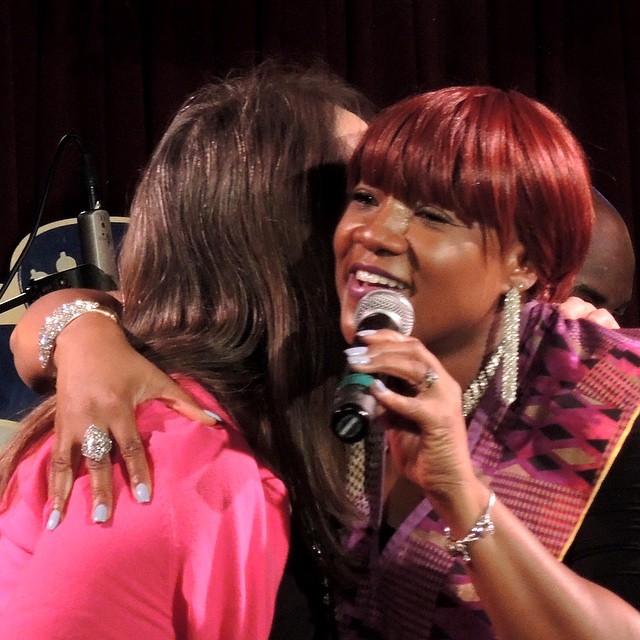 #SweetSundayBrunch is also inspired by the incomparable joy that came of singing with the Harlem Gospel Choir. I still get teary-eyed when I think about the day I blogged about being a “caged bird” who trembled at the very thought of singing out loud, even in private. I challenged myself to take a workshop with the world-famous gospel choir, at the Escondido Performing Arts Center. It was definitely outside my comfort zone, but it stood at the very top of my bucket list, and I was ready for the challenge.

To my great surprise, I was invited by the lead singer to join the choir onstage, and to stand next to her in the spotlight.  To my even greater amazement, I sang a full-throated version of “Oh Happy Day” at center stage, without fear or inhibition. When the final grace note dissolved into silence, each of the choir members came forward and hugged me. The lead singer ushered me offstage, but not before saying (loud enough for all to hear), “We’ve been friends for a long time. But we are more than that… we are family.” It was one of the most authentic expressions of love that I’ve ever experienced, and I (along with the Harlem Gospel Choir) want to share it with all of you.

Me, shortly after singing onstage with the Harlem Gospel Choir–oh, happy day!

#SweetSundayBrunch is an interfaith, nondenominational, toe-tapping, tambourine waving, guilt-free gathering that’ll make you wish you could scratch-and-sniff your Twitter page. 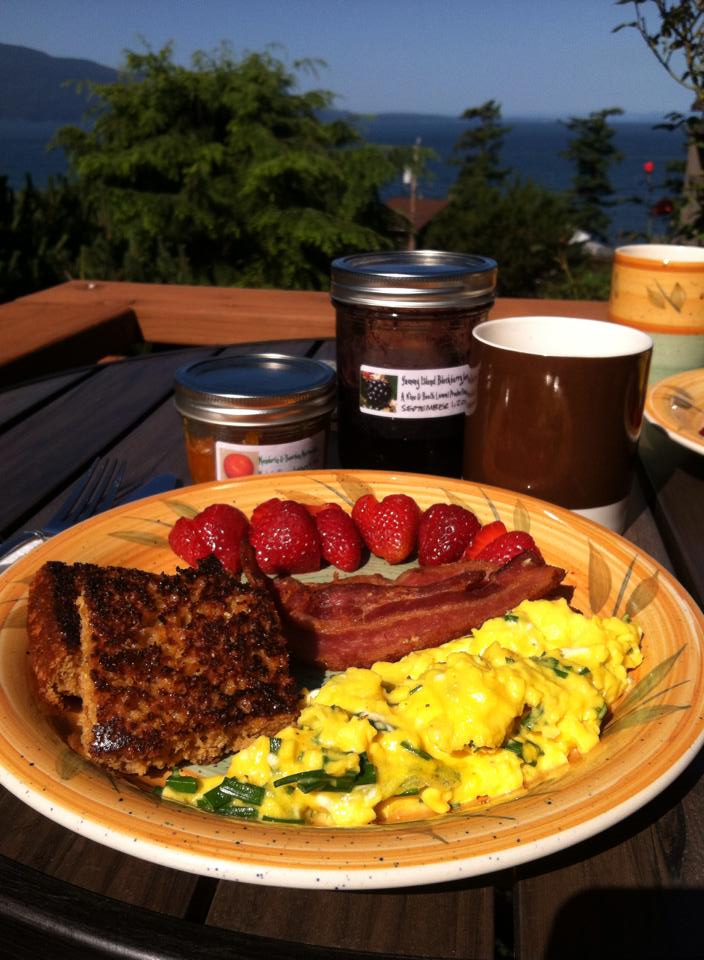 Our first Twitter chat is this coming Sunday, June 21st. Since we’re expecting guests from around the world, it’s not tied to a certain time zone. 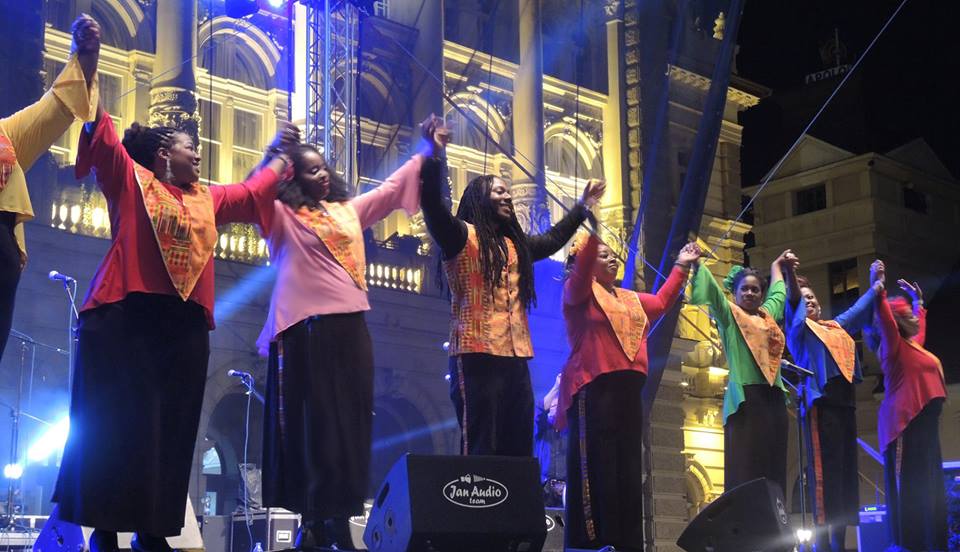 Sound fun? We hope so! This is our first foray into the hashtag world, so we’re hoping you’ll help boost the signal.

Giraffes are graceful animals, but don’t let their gentle demeanor fool you. Living as they do on the African savanna, they have no choice but to stick their necks out.  How else to avoid potential predators, or to locate the next watering hole? No better way to reach the highest tree branches, where the tastiest morsels grow.

If a carousel animal can suggest a truth universal, maybe it’s this: The golden ring is available to those of us who are willing to stretch beyond our comfort zones, and to set our sights on the unknown. Danger lurks, but that’s a given, even for those who seek refuge in a merry-go-round existence.

If there’s a time when a person’s neck is most exposed, it’s when they’re writing memoir. It’s hard, sometimes, to trust the process. But oh, the treasures that make themselves known to us, when we prove ourselves willing to stretch beyond any preset notions or boundaries, and to bravely explore each memory for its underlying essence!

(Random though it might seem, this blog entry was  inspired by a visit to “my” desert oasis this past weekend, where I reflected on next-steps for my memoir  and pondered Alan Alda’s quote. And of course,  long-time readers know already how fond I am of the Endangered Species Carousel.)

Nothing says spring quite like the Return of the Swallows Festival at Mission San Juan Capistrano.

I’ve heard tell of it since we studied California History at Sunkist Elementary School, way back in 4th grade. Fiesta de las Golondrinas: that’s how we said it later, in Spanish class.

Legend has it that a San Juan Capistrano shopkeeper swiped at the Cliff Swallows‘ mud nests with a broom, grumbling all the while about the mess these tiny “nuisances” made. The kindly Father O’Sullivan, intervened. “Come on swallows,” he said, “I’ll give you shelter. Come to the Mission. There’s room enough there for all.”

Scientific evidence suggests a different timeline, but tradition says that it was during Monsignor St. John (“Sin-Jin”)  O’Sullivan’s tenure at the Mission (1910-33) that the Cliff Swallows first built their gourd-shaped nests on the renovated Sacristy of the Old Stone Church, and under the red tile roofs of its outbuildings.

Every autumn, O’Sullivan noted in his journal, the tiny birds vacated their nests for warmer climates. All the way to Argentina, as it turns out. Come springtime, they’d once again find their way back to San Juan Capistrano (a 15,00 mile journey!), where they’d spend several pleasant months in their former nests.

Each year, Father O’Sullivan welcomed the swallows’ return. They were sheltered by the mission, just as he promised.

Sad to say, recent Mission restoration projects have proved themselves detrimental to the swallows’ migration, same as with nearby housing developments. The community wants very much to lure the swallows back to the Mission. In consultation with concerned experts, they’ve hatched some creative ideas, none of which have proved successful. So far. You can read more about those efforts here.

And still, the visitors come. Tourists from around the globe flock to Mission San Juan Capistrano on March 19th every year, undeterred by the swallows’ potential absence. The Festival was on my bucket list, too, for as long as I’ve lived in Orange County. Which is to say, I’ve procrastinated for a good long while. But this year, I put it my calendar. In ink. Regardless. And whaddya know: I finally made it!

I drove this time, but the Surfliner looks like a fun option!

The festivities began with hushed silence, followed by the ringing of the Mission Basilica school bells.

As with most cultural events, there was pageantry of all sorts–including but not limited to storytelling and dancing, clanging bells and mariachi music.

Monarch butterflies drifted through the gardens, which were just now coming into bloom.

Sacred objects were on display, as were ancient California cultural artifacts. It was a feast for all senses, a joyful occasion with a little something for everybody.

For this first-time visitor, it was the schoolchildren’s performances in the sunny courtyard — all radiant smiles and vibrant costumes–that brought these long-standing traditions to life.

We watched them for nearly two hours in the open courtyard, sunshine streaming down on us from a cloudless sky. Ahhh, spring.

Some visitors retreated to the darkened chapel. Still others made a beeline from the ticket line to the gift shop. The lines grew long at the Snow Cone stand, and the exhibit halls emptied. No matter. There was shelter for everybody, room for all.